Taijiquan IS the exercise - Taiji IS the goal 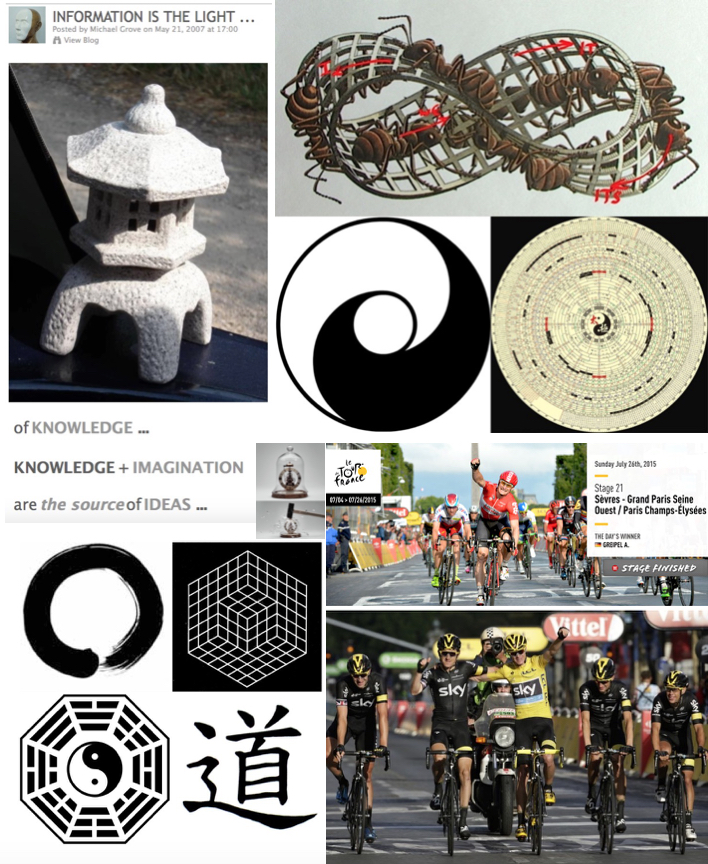 NO better exemplification of the YIN and YANG TAIJI 'cycle of life ' can be demonstrated, than the FLOWING ACTION of MOVEMENTS involved during the, dantian driven, cloud hands exercise of TWO BIRDS FLYING, which mirrors the path of the ants along the 4D surface of Escher's insightful interpretation of the Mobius Strip.

"Just as it is impossible to grasp the TAO intellectually or through some logical procedure, the principles of Taijiquan can only ultimately be experienced
intuitively. There is a kind of "a-ha" experience when the body responds to the

eternal flow. However much one practices, without that inner knowing there is no awareness of the symbolic meaning of the movements. This shift in consciousness allows most of the blocks to the awareness of more esoteric

matters to be removed. As a result, we become reconnected to and original

insight, the Tao, which allows us to gain access to, and IS the working and

the wonder of, the cosmos." - Pamela Ball "The Essence of Tao"

At the core of the commonwealth of our Commonwealth of Nations, which at one TIME before the Boston Tea Party event, very much included the 13 states of New England, lies that which I have oft referred to as the curious case of BEING BRITISH, which very definitely, DOES NOT just include those resident in Britain.

Ever since Chris Froome became one of the very first cyclists to join the SKY Team of cyclists, I have found it fascinating to contemplate the fact that as a child born in Kenya, with British genetic heritage, he was sent to school in South Africa during the final days of Mandela's imprisonment, release and Presidential election. The undoubtedly significant epigenetic consequences of his time spent in the southern reaches of the Continent of Africa, in combination with his genetic heritage, as well as his low blood pressure, diet and more recent bodily development - equally bring to mind a picture of what our forebears must have looked and performed like, when they left the Pinnacle Point Caves on the southern shores of the continent some 50,000 years ago.

Despite all the rancour and recrimination, the wild speculation and innuendo that has accompanied Froome's progress around France these last three weeks, and by definition Team SKY's own progress - All that the French Teams need to do NOW - as well as their sycophantic French media - IS to begin to understand THE Meshworks ACTION of T.E.A.M. Sky [Together Everyone Achieves More] and pay cognisance to Chris Froome's Final Yellow-jersey Podium speech; as to how its done, as a fully integrated WHOLE rather than a disparate collection of individuals. ETTIX, LOTTO and others have already got the message but the rest still have to step up to the plate or the Yellow Jersey PODIUM in this particular SPORT !!!???

In what for me has been THE VERY BEST Tour de France to date, since the Lance Armstrong BETRAYAL of the EVENT; and hopefully a pre-cursor of much better ones to come, I am tempted to describe Team SKY's achievement as a PERFECT EXEMPLAR of the NATURAL DESIGN PROCESS.
A Natural Design Process which Elza Maalouf has so succinctly proposed in her book entitled EMERGE! and recently presented at the 2015 ITC event.

Information IS indeed the LIGHT of KNOWLEDGE - a light which must be shone to illuminate the minds of everyone - in respect of the fact that the TIME IS NOW to revert from a MINDSET driven in accordance with the Gregorian Calendar in favour of a NEW MINDSET in accordance with the Calendar of NATURE. As Leonardo da Vinci concluded, towards the very end of his life whilst staying at Le Clos Luce in the grounds of Chateaux d'Amboise in Loire, France ...

ALL IS in NATURE - WE ARE a CIRCUMSTANCE of NATURE