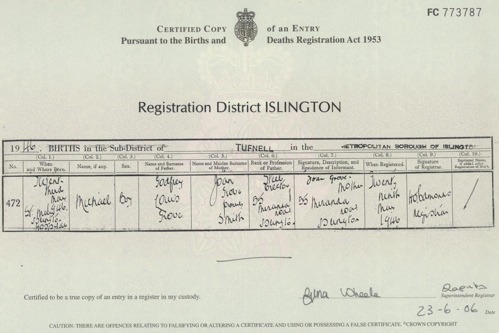 23rd May 1946, was born a child in St. Mary's Hospital, Archway, north London
- of Joan Grove & Lou Grove - conceived of a relationship of LOVE - established during, & in spite of, the horrific events of World War II - & bearing in mind Erich Fromm's words -
MAN's main task in LIFE is to give birth to himself

A child who was - in the words of his headmaster - on gaining
entrance to Boreham Wood Grammar School at the age of 11 years
- destined to set the world on fire !

For a different SORT of BIO - follow this thread

The first of our SOUL-MATE birth certificates - both written in the very distinctive, self-same - cursive handwriting - precient no doubt of our italic handwriting ability

But he who kisses the joy as it flies

Awake O sleeper of the land of shadows, wake! expand!…
Weep at thy soul's disease, and the Divine Vision is darkened…”


I could not then understand or initially come to terms with - why so much of the big picture - which I have always found so easy to comprehend - was seemingly inaccessible to ALL of those that I came in contact with.


Equally - & in stark contrast to this understanding - at 60 years of age I have yet to master the art of tying my shoe laces and have long since subscribed to the likes of Timberland footwear.


Up to 9 years of age I was - without question - @peace with the world & all that it then comprised for me - but an event then took place in my life when - during a thrashing from my piers, I would have strangled a fellow human being to death, had it not been for others prising my hands away from the throat of my potential ‘victim' - in the flash of the moment I realised I could no longer survive in the world I inhabited - unless I began to stand up for myself and adopt the ways that others - in this strange world - had established as their modus operandi.


I subsequently came to the understanding that my destiny in life was to provide the mechanisms by which ALL my fellow human beings could be @peace with the world & all that it comprised for them.

I realised I could no longer survive in the world I inhabited - unless I began to stand up for myself and adopt the ways that others….

innovative imagination and his experiences with the Zulu's in South

Africa, training them to build the  John Laing designed, river-crossing

desert, whilst mine-sweeping with his childhood friend, which resulted

in his 6 months stay in hospital in Alexandria, prior to being landed at

from Mussolini and Hitler's power over ROME.

My own journey of life, having been encouraged by my mother and

her father to become confirmed into the Church of England, was one

of the discovery that GOD has NO RELIGION - consequent to my

No closer to THE TRUTH of the theory of everything - have I found,

than in the works of Douglas Harding, and particularly following

countless hours of reading my limited edition of his...

Hierarchy of Heaven and Earth and his splendidly communicative