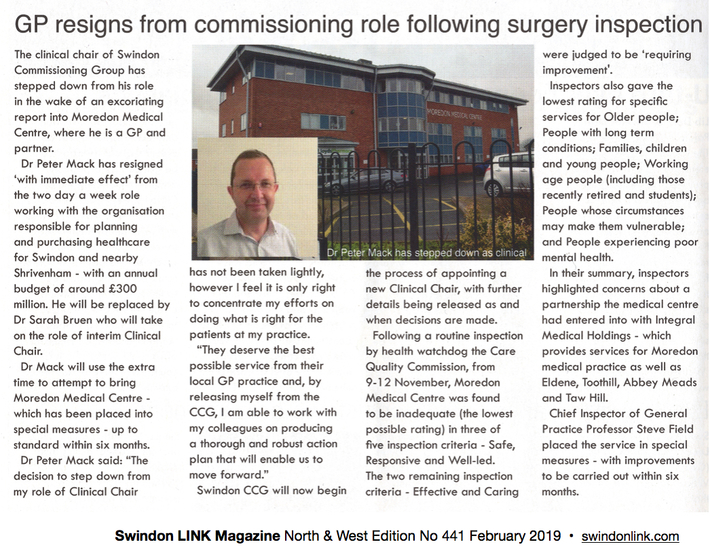 APPARENT that the SWINDON UNITARY AUTHORITY [IS]

[BE]ing utilised as the whipping boy, by the so-called

POWERS that BE in the Government of England • let alone

Wales, Scotland and Northern Ireland • who have adopted

their own version of the divine right of Kings, with

regard to the Medical Services for those who have been

encouraged to adopt Swindon as their home town over

the period of the last 30 years or so.

Tudor and Stuart monarchies of the 15th and 16th centuries. This may not

have been quite as bad as it sounds. The whipping boys weren't hapless

street urchins living a life of torment, but high-born companions to the

royal princes. They were educated with the princes and shared many of

the privileges of royalty. The downside was that, if the prince did wrong,

the whipping boy was punished. It was considered a form of punishment

to the prince that someone he cared about was made to suffer.

In the context of the signing of Magna Carta in 1215 however, and

the beheading for treason of King Charles I on January 30, 1649;

understand when put into further context. The Divine Right of Kings

answerable to God alone, in juxtaposition to the ever legitimate concept

of GOD HAVING NO RELIGION.

"The state of monarchy is the supremest thing upon earth; for kings

are  not only God's lieutenants upon earth, and sit upon God's throne,

but even by God himself they are called Gods."

£400,000 unit for intravenous treatments; that NHS staff have embraced

etc. the fact that several thousands of the residents in North Swindon, now

have NO ACCESS to the NHS services whatsoever, because they need a

because ALL ACCESS TO NHS secure online services state continuously

weeks, on a forward rolling basis.

Needless to say I am registered for NHS online access and THIS
IS THE TRUTH of THE REALITY of the situation which prevails.