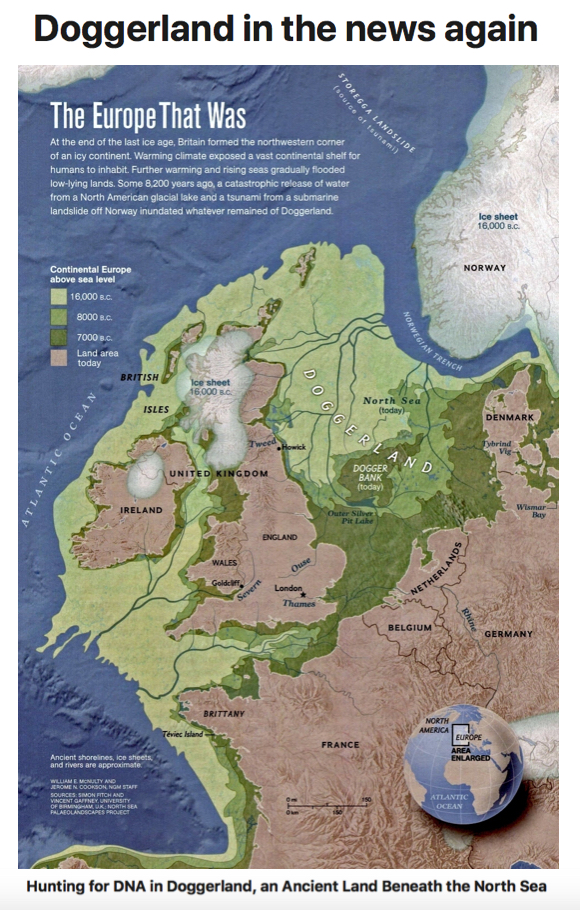 Over time, sea levels rose and Doggerland became increasingly submerged, eventually becoming cut off from land on both sides and forming an island. Around 6000 BC a devastating tsunami tore down through the North Sea and across the island of Doggerland, wiping out its population. The story of Doggerland tells us of our history as Europeans and also of our beginnings as an island race. After the submergence of Doggerland the residents in Britain became cut off from the European mainland and began to develop independently. The spread of agriculture, from the Fertile Crescent through Europe, stopped at the Channel and our island mentality began to form.

The Romans of course came and went, having subdued The Druids but nevertheless imbued the MINDSIGHT of Britain with so much of that which we take for granted these days • BUT the Normans came and NEVER LEFT.
Having eventually been prevented from crossing the Thames to the South East of London following their victory at the Battle of Hastings and being forced to march Westwards until they could cross the river at Wallingford, William and his army then proceeded Eastwards, before then approaching London from the North, whilst along the way replacing all of the Anglo Saxon Barons with their own Norman Elitist versions of same, in compensation for their efforts in defeating the English.
Thus began the process of turning London into a fortress based on the Tower from which CONTROL of ALL the PEOPLES of ALL THE ISLANDS would be eventually established, by way of a legion of Castles modelled on the Tower of London. IS THERE ANY WONDER NOW THEN that THE PEOPLES outside the M25 are seeking to somehow redress this situation, by getting rid of the EU's system of MIND CONTROL and thence bringing pressure to bare on the Parliamentary Voting System to serve THE process of DEMOCRACY  for, by and of ALL the PEOPLES of ALL THE ISLANDS, that lie off the North Western coastline of Eurasia.