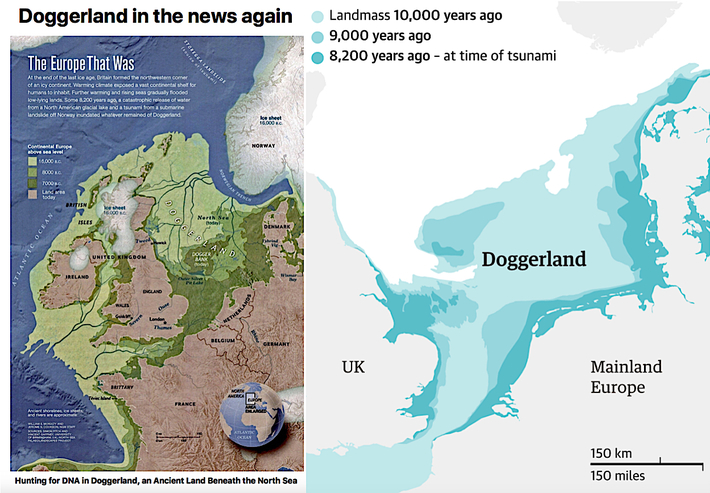 gives up its ancient secrets...

human life until it flooded. The idea of a “lost Atlantis” under the North Sea

connecting Britain by land to continental Europe had been imagined by

HG Wells in the late 19th century, with evidence of human inhabitation of

a lump of peat containing a spear point. But it is only now, after a decade of

pioneering research and the extraordinary finds of an army of amateur

archaeologists scouring the Dutch coastline for artefacts and fossils, that a

major exhibition is able to offer a window into Doggerland, a vast expanse

of territory submerged following a tsunami 8,000 years ago, cutting the

British Isles off from modern Belgium, the Netherlands and southern

The exhibition, Doggerland: Lost World in the North Sea, at the

southern Holland, includes more than 200 objects, ranging from a deer

bone in which an arrowhead is embedded, and fossils such as petrified

hyena droppings and mammoth molars, to a fragment of a skull of a young

male Neanderthal. Studies of the forehead bone, dredged up in 2001 off the

coast of Zeeland, suggests he was a big meat eater. A small cavity behind

that would have been visible as a lump above his eye. 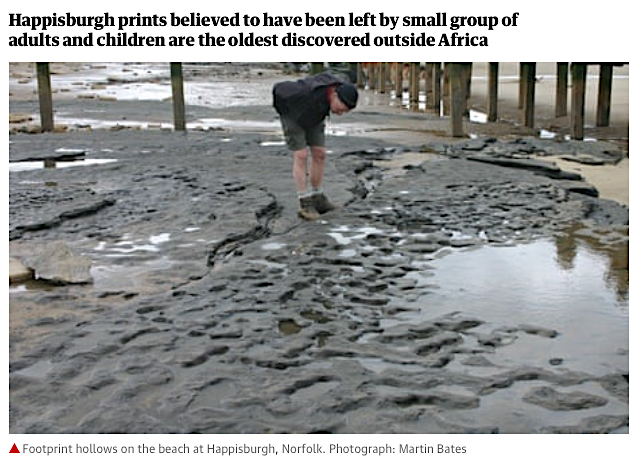 discovered on the storm-lashed beach at Happisburgh in Norfolk,

one of the fastest-eroding stretches of the British coast. Within a

fortnight, the sea tides that had exposed the prints last May

destroyed them, leaving only casts and 3D images made through

photogrammetry (stitching together hundreds of photographs) as

had passed that way.