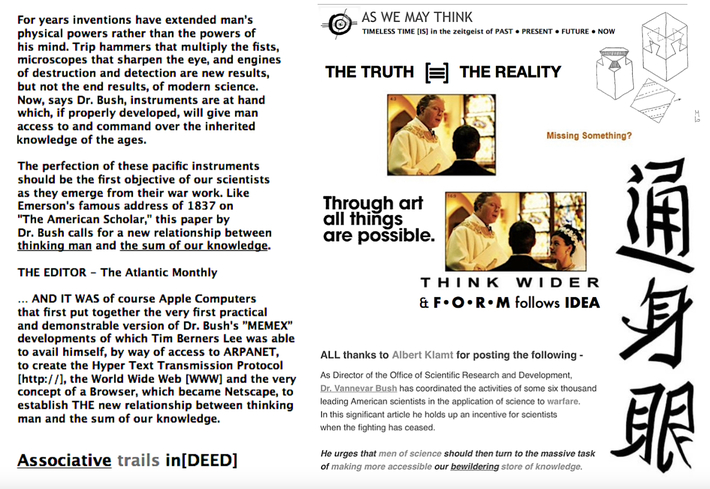 SO WHY one must ask [IS] the MAN who

My own role in LIFE here in cyberspace IS AS [IT] has
always been … BUT to share my own experience of
understanding of ALL of the interrelated perspectives of
the information [IN] formation of the REALLY BIG PICTURE;
with ALL who would listen and take cogniscence of what
has been said; and then to thrive on the feedback, as yet
another step on my journey up the mountain.
As I have intimated elsewhere there are few individual
scientists that have EVER absolutely understood the
REALLY BIG PICTURE. So here I AM today saying that
Tim Berners Lee [IS] in[DEED] the very exception to that
particular rule because he an his associates are in my own
speak about to SET THE WWW on FIRE.

"I’ve got a vision for an alternative world, in which that

data does exist, but it’s at the beck and call of the user

themselves. Where the apps are actually separated

from the data source. So when you use an app, it asks,

where do you want me to store the data? And you have

complete control over who gets access to it. It would be

a new world. We’re talking about a future in which

these programs work for you. They don’t work for

Amazon, they don’t work for Apple" and in response to

Perrigo's questions: "When you envisioned the world wide

web for the first time 30 years ago, did you have any sense

of the impact that it would have?" and "Did you predict the

Tim Berners Lee answered: "I didn’t. We didn’t even know

that it would work. To some extent, there are still

things that can go wrong with it, and we shouldn’t take

it for granted" and "Yes and no. Did we imagine that

people would do bad things on the web? Absolutely.

From very early on, we knew that if it’s a powerful

technology, then it’s going to be used for good and

initially our feeling philosophically was that the web

should be a neutral medium. It’s not for the web to try

to correct humanity. The web would hopefully lead to

maybe more sympathetic to itself — and therefore,

perhaps less conflict-ridden. That was our hope. But

in general, we expected day-to-day life on the web to

be like day-to-day life on the street, to have its rough

edges and its smooth edges".

AS WE MAY THINK in[DEED] 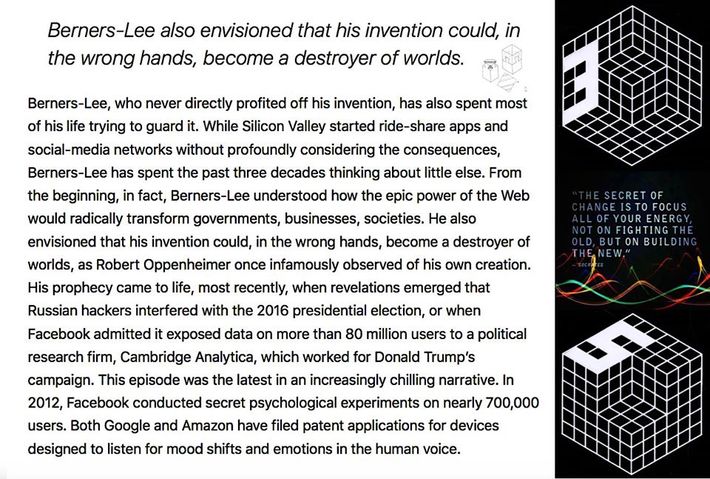 For the man who set all this in motion, the mushroom cloud was unfolding before his very eyes. “I was devastated,” Berners-Lee told me that morning in Washington, blocks from the White House. For a brief moment, as he recalled his reaction to the Web’s recent abuses, Berners-Lee quieted; he was virtually sorrowful. “Actually, physically—my mind and body were in a different state.” Then he went on to recount, at a staccato pace, and in elliptical passages, the pain in watching his creation so distorted. 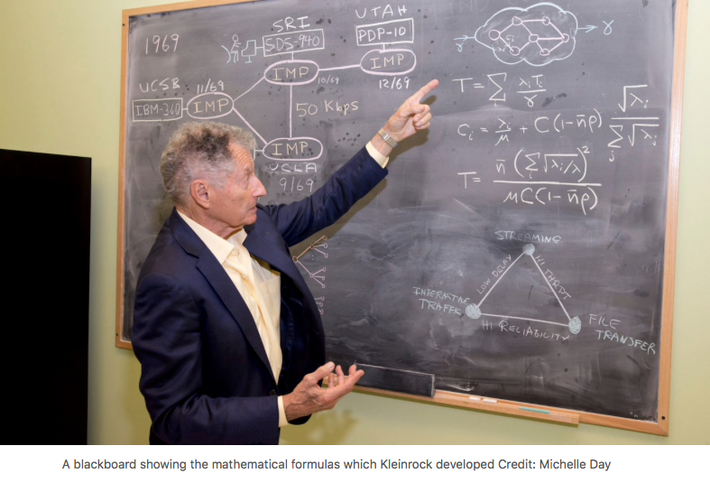 NEVER forgetting of course the intimate involvement of MIT in y[OUR] journey towards an extensively global interactive multimedia capability with regard to and respect for cyberspace communications, during the last 100 years and particularly with respect to the development of ARPA & ARPANET and the tools which Tim Berners Lee utilised to establish the World Wide Web as ME•WE know and understand [IT] today.