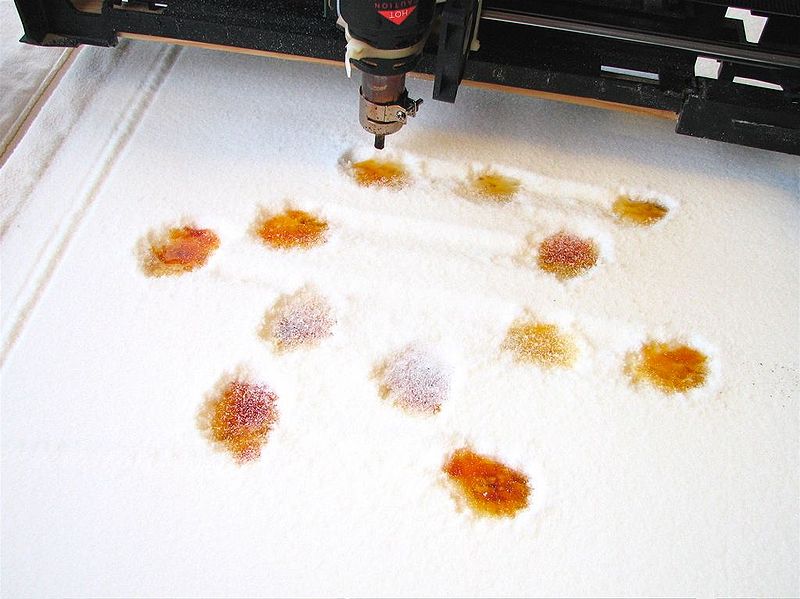 The CandyFab granular printing system uses heated air and granulated sugar to produce food-grade art objects - art as ever "showing the way" forward to the ever evolving process of science and technology.

As Allister Heath has stated in his recent Telegraph Viewpoint article -

wished, as long as it was black, but 3D printing will take customisation to

its logical conclusion. Choices will often be created or supervised by

consumers themselves; in extremis, micro-markets will consist of just one

There will also be an explosion in self-production and DIY manufacturing;

a social network. One can now buy a proper second-hand 3D printer for a

few thousand pounds and the price will keep on falling; eventually, they

could become as ubiquitous as microwave ovens.

suicide for any nation to ban the technology, or regulate it out of existence.

It would certainly be equally mad to downplay its risks, and its safe use will

require a major change in policing techniques, but the benefits from its

mass adoption will outweigh its costs.

Given that economies of scale will no longer be so essential, 3D printing

will drastically reduce the barriers to entry to start-ups. Anti-trust policy

will become obsolete. The influx of new competitors will shake up many

industries, just as old oligopolies built around intellectual property have

already been smashed. One interesting case study is Makielab, a

Shoreditch-based firm which allows users to design a truly be- spoke doll;

when a child or its parents are satisfied with the design, they can order a

providing cus- tomers with apps and websites. Some will succeed, many

will fail, fortunes will be made and lost in a great 3D bubble, but all will

Eventually, even governments will be threatened by the 3D printing

revolution. In a world of endless choice, who will put up with one size fits

all public services and flawed, bureaucratic decision making? If they want

to redeem themselves, the politicians will need to find a way of preventing

maniacs from abusing this marvellous technology, while allowing a

generation of visionary entrepreneurs to use it to engineer a new,

A British inventor has unveiled the ultimate Star Trek gadget -

a £650 handheld scanner that could be used to copy almost any item.

The Fuel3D scanner, originally developed at  Oxford University, can capture

everything from a flower’s petals to the contours of human skin. It is able

to capture images in seconds, and they can then be sent to a computer for

Everybody knows the works of Dutch graphic artist Maurits Cornelis Escher, those mathematically inspired woodcuts, lithographs, and mezzotints. Escher's work uses polyhedra and geometric distortions and that makes his drawing so fascinating.

Now one research group decided to make it possible to bring some of these "impossible" shapes to real life.

A 3D-printed implant was used to replace 75 percent

of a man's skull in a surgical procedure earlier this year.

Schools are the worst technophobes but universities have also failed to keep up - still mostly requiring students to study full time on location and pay increasingly unaffordable fees for the privilege of listening to often mediocre lectures.

The Future of 3D Printing

. . . and then JUST IMAGINE the D-Shape 3D printer making the 'cgi multi-shaped blocks' out of graphene and utilising them, using the processes of flight assembled architecture,

The 21st century revolution in building technology has a name. D-Shape.
The mega scale free-form printer of buildings.
What couldn't be done, now can be done.

D-Shape is a large 3-Dimensional printer that uses stereolithography, a layer by layer printing

process, to bind sand with an inorganic seawater and magnesium-based binder in order to create

stone-like objects. Invented by Enrico Dini, founder of Monolite UK Ltd, the first model of the

D-Shape printer used epoxy resin, commonly used as an adhesive in the construction of skis,

cars, and airplanes, as the binder. Dini patented this model in 2006. After experiencing problems

with the epoxy, Dini changed the binder to the current magnesium-based one and patented his

printer again in September 2008. In the future, Dini aims to use the printer to create full-scale

The installation, called "Flight Assembled Architecture", was conceived and built by teams led by

Fabio Gramazio & Matthias Kohler as well as Raffaello D'Andrea at the ETH Zurich. It illustrates a

radically new way of thinking about materializing architecture: Use a multitude of mobile flying

agents working in parallel and acting together as a scalable production means. As you can see in

the video, the quadrocopters are programmed to interact, lift, transport and assemble small

modules in order to erect a building.

The tower is actually a 1:100 model of a "vertical village" with a height of 600 meters and housing

have a look at http://www.idsc.ethz.ch/Research_DAnd...

My thanks to Michael for posting his MOON COLONY built by Robot 3D Printers and all of the comments for discussion made therein.

Inside a hip hotel room in Cupertino, California - just a short walk from Apple’s headquarters—the phone rings. I answer. A recorded voice tells me that my delivery has arrived. Just outside the door, I find a squat, white pillar of plastic and metal waiting expectantly.

The UK government is making a strong push into developing 3D printing's potential in aerospace, by investing £100m ($158m, €141m) into a new research centre in Coventry, as well as launching a competition, giving £10m funding to aerospace firms.

Small business minister Anna Soubry opened the £60m Aerospace Research Centre and National Centre for Net Shape and Additive Manufacturing in Coventry on 22 June, which is based at the existing Manufacturing Technology Centre (MTC).

The MTC is one of nine centres across the UK which is designed to help companies take technologies developed in academic research institutes and bring them to market, and the one in Coventry will now take a special interest in 3D printing.

Standing at 12 meters tall, ‘big delta’ is an undertaking to take 3D printing to a much larger scale.

their dream of a giant 3D printer that could contribute to the dramatic global issue of housing.

The united nations calculated that over the next 15 years, there will be a need for an average of

demand. supported by a sturdy frame a movable nozzle that acts as a mixer will layer mud and

at the microscale, possibly leading to more complex architectures and electronic devices.

It also has the ability to print objects in mid-air. By printing in mid-air, users can create

freeform objects and patterns that were not possible using traditional 3D printers.

... according to a recent press release,

... and Siemens is building an army of robot spiders called SiSpis that are equipped with artificial

intelligence and 3D printing nozzles. This allows them to autonomously and collaboratively build

wherever they are, a new system the inventors are referring to as "mobile manufacturing."

Morphogenesis and mechanostabilization of complex natural and 3D printed shapes

related to their functions. Mechanostabilization of shape of biological structure via morphogenesis

has several beautiful examples. With the help of simple mechanics-based modeling and

experiments, we show an important causality between natural shape selection as evolutionary

outcome and the mechanostabilization of seashells. The effect of biological growth on the

mechanostabilization process is identified with examples of two natural shapes of seashells,

concentric localization of stresses. We demonstrate how the evolved shape enables predictable

protection of soft body parts of the species. The effect of bioavailability of natural material is

found to be a secondary factor compared to shape selectivity, where material microstructure

only acts as a constraint to evolutionary optimization.