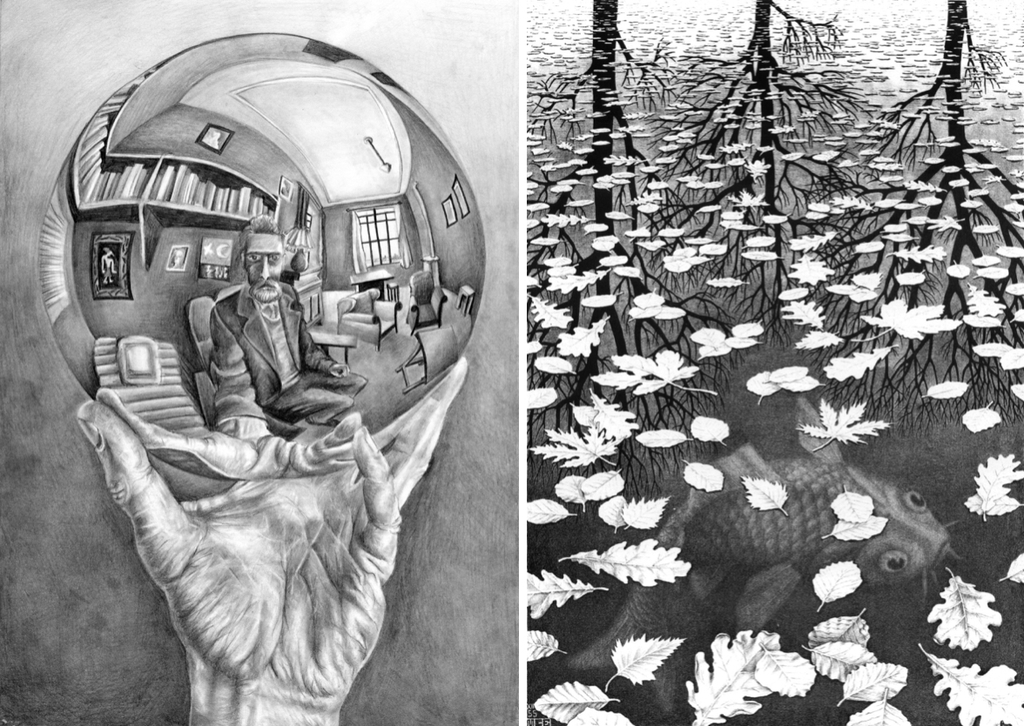 32cm x 21.5cm - lithograph - 1935 - M.C.Escher - RIP     36cm x 25cm Three Worlds - lithograph
A reflecting globe rests in the artist's hand. In this mirror he can have a much more complete view of his surroundings than by direct observation, for nearly the whole of the area around him - four walls, the floor & ceiling of his room - are compressed, albeit distorted, within this little disc. His head, or to be more precise, the point between his eyes, comes in the absolute centre.
Whichever way he remains at the centre.

The EGO is the unshakable core of his world 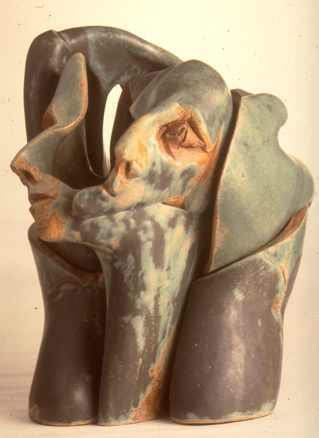 
MISSION ACCOMPLISHED or have YOU yet to complete YOUR MISSION 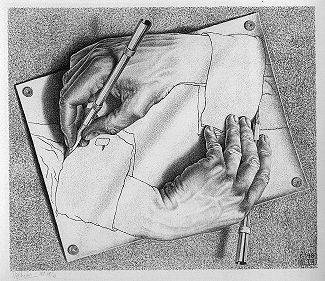 Anyone who applies himself, from his early youth, to the practice of graphic techniques may well reach a stage at which he begins to hold as his highest ideal the complete mastery of his craft. True enough there is tremendous satisfaction to be derived from the acquisition of artistic skill and the achievement of a thorough understanding of the properties of the material to hand, and in learning with true purposefulness and control to use tools which one has available - above all, one's own two hands!
I myself passed many years in this state of self delusion. But then there came a moment when it seemed as though scales fell from my eyes. I discovered that technical mastery was no longer my sole aim, for I became gripped by another desire, the existence of which I had never suspected.

Ideas came into my mind quite unrelated to graphic art, notions which so fascinated me that I longed to communicate them to other people - M.C. Escher

This could not be achieved through words, for these thoughts were not literary ones, but mental images of a kind that can only be made comprehensible to others by presenting them as visual images.
M.C. Escher
.
.
First posted by Michael Grove @zaadz on 13th March 2007 at 1300 GMT/BST
.

I like the idea of ego as a core, and indeed in the center of the globe's picture - yet, on the other hand, as there is neither subject nor object to be found except in imagination, it is beautiful to find that all this is actually waving and whiggling…

Only when you can hold both the strong and the weak in your awareness can the Whole of the dual come together - as Marc has so succinctly stated.

” Generally, our ego-selves are culturally conditioned. As a consequence, we not only act in accordance with our prevailing world-view and beliefs, but our identification is so powerful that we are literally unable to see what we cannot imagine.”
CosMos

Consciousness is not something that can be sucked out of being   to leave an awareness-free “ontology” lying around waiting to be known by some other sentient being; consciousness, rather, goes all the way down, and forms part of the intrinsic awareness and intrinsic creativity of each ontological being or holon.  Whitehead’s “ultimate category” - namely, “the creative advance into novelty”—is part of the prehension of each and every being in existence, and the creative-part cannot be ripped from the being‑part without severe violence.