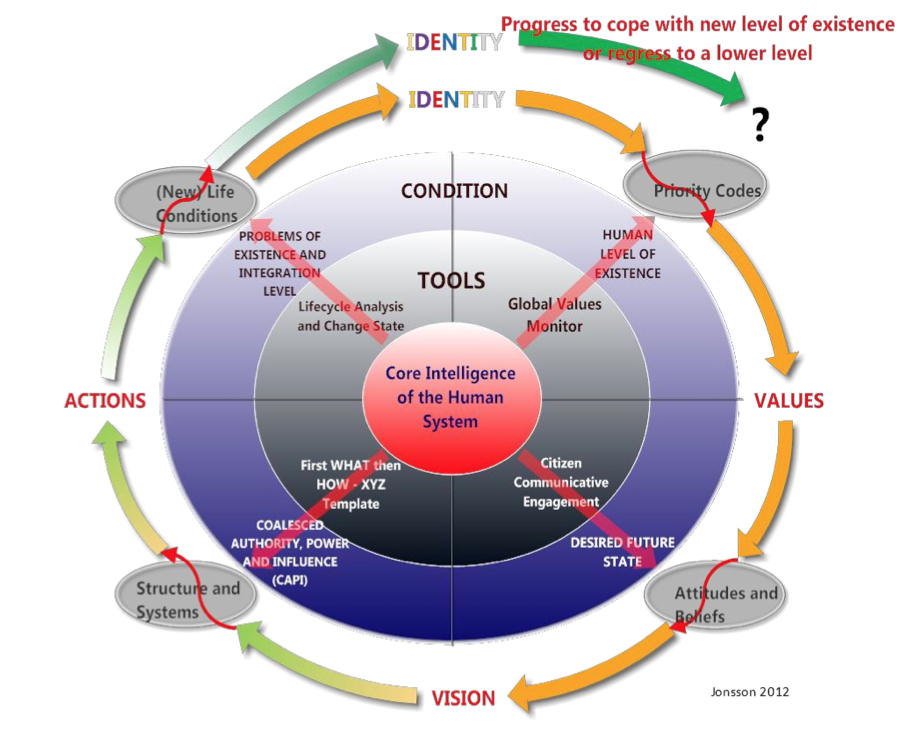 “The truth is not to be found in books, not even good books.

The truth IS to be found in people with good hearts.”

Iceland was devastated by the financial crisis of 2008, suffering a total

collapse of its national banking system. The following year, amid riots

unprecedented in the country’s long history, 1,200 citizens gathered to

engage in constructive dialogue and visioning for the restoration of their

homeland. This National Assembly was so successful that many similar

events were subsequently organized, including one called for by Iceland‘s

Parliament specifically to initiate the reformation of its National

Constitution. This paper explores the extent to which a structured dialogue

facilitate visioning for and natural development of that system, contributing

to its conscious evolution and natural design.

The methodology, structure, and outcome of this inquiry process are

examined, including how the patterns of dialogue emerge and their

systems. Potential policy implications are studied, as well as technological

developments that could open new dimensions for electronic collaboration

in the Assembly Process. It is argued that the process has wide area of

range of issues within various types of organizations and communities.

and further motivation to scholar practitioners to further research and

develop methodologies, tools, and techniques to engage those who are

subject to socioeconomic forces shape those very forces toward the greater

Laxness reflects well the basic philosophy behind this paper. This research

project has, to a great extent, evolved from a search for a truth; not the

truth, but a truth within a human system that finds itself in times of

trouble. Another anonymous source has it that the truth is not only that

of oneself, but must be sought in encounters with other people who have

their own truth, and must bear in mind three basic principles: acceptance,

respect, and understanding. These basic values have been the true pillars

of the dialogue events studied in this paper.

The question is, to what extent can such a citizens’ communicative

evolution”? The dialogue process has now been used for a wide variety of

issues ranging from specific organizational strategies to a visioning project

for a whole nation. The process is studied using theories on participative

action inquiry, dialogue, and public spheres. It has been argued that this

carefully structured and facilitated process has the potential to create an

environment of safety and creativity where every opinion counts.

It would be highly arrogant to maintain that Conscious Social Evolution

model has the capability of managing change within a human social

system. On the other hand, the objective of this paper is to contribute to

the understanding of the evolution of human social systems and the

significance of a constructive communicative engagement centered around

shared vision and superordinate goals. The argument of this thesis is that

healthy evolution from one level of existence to another.

The research behind this paper has been an emergent process; while

working on it, things have happened that have affected the project in

fundamental ways. Iceland’s financial collapse of 2008 was an invaluable

source for researching a large-scale human system; its dynamics and

responses to development are of grave consequence for the identity and

overall wellbeing of the system. The situation provided opportunities to

study the overall challenges of the society, its life conditions and ways of

thinking that, in many ways, led to the crisis.

The Conscious Social Evolution Model was created to study

the forces that shape human systems for better or for worse.