I AM REMINDED BY THIS PARTICULAR NEWS ... 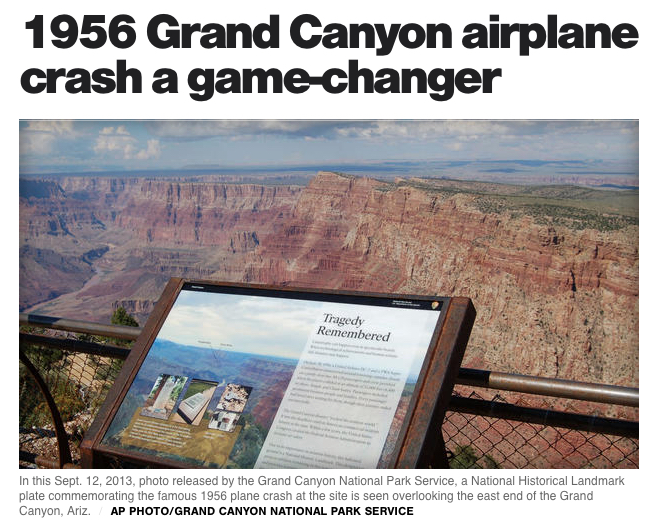 of the reference made by myself to this tragic accident, in a post

from Albert Klamt, around the time of his own post about the

control of complex systems. May the victims of this event and their

extended families, as well as ALL of those involved with the complex

systems rest in the peace of understanding the need for ACTION.

The CBS NEWS article opens with this ...

FLAGSTAFF, Ariz. - In the mid-1950s, air travel was a shadow of the highly advanced operation of checks and rules seen today. The skies were largely uncontrolled, and pilots outside major U.S. cities relied on sight to avoid catastrophes. Then, two commercial airplanes crashed over the Grand Canyon in June 1956, killing all 128 people aboard in the deadliest aviation disaster of the time and helping spur an overhaul to flight safety. A country already grappling with increasingly busy skies pressured Congress for major changes to improve air traffic control and radar systems and to create a federal agency to regulate it.

"It really did underscore for the general public, for the first time, that much of the air space in America was uncontrolled at that time," said Peter Goelz, former managing director for the National Transportation Safety Board. "Once you got up to 20,000 feet and beyond the terminal radars, it was see and be seen."

Grand Canyon National Park will mark the designation of the crash site Tuesday as a National Historic Landmark in a ceremony overlooking the gorge on the east end where the wreckage was scattered over 1.5 square miles. Some of the victim's remains never were identified, and most of those that were have been buried together in mass at cemeteries at the Grand Canyon and the northern Arizona city of Flagstaff.

THE most important products in development for NextGen Air Traffic

Management System are the definitional tools and documents that explain

what the system is, what its capabilities are, and how they all fit together.

scope. With that in mind, the JPDO is working with all of its government

partners and the private sector in developing the...

Concept of Operations and the Enterprise Architecture.

procedures, and the changes in the function that will be needed to make

the system a reality. The Enterprise Architecture is much like a set of

blue- prints. It defines the key capabilities of NextGen, how they fit

together, the timing of their implementation, and how they affect the

various members of the aviation community.

The Crash that Changed the Way we Fly; the story of the 1956 Grand Canyon mid-air collision that revealed that there was no en-route Air Traffic Control in place only Flight Information which was sparse if available at all.

This tragedy acted as the catalyst for major changes in the way commercial flying in the USA was conducted from the perspective of Safety First, Expedition Second, in the context of the fact that a Flight Information Controller Controls NOTHING. It led to the activation of an Air Traffic Control System which required that all flights above 18,000 ft be on an IFR flight plan and separated from each other, by way of Procedural or Radar Control.