HOW THE CULT OF THE LEADER THREATENS ... Democracy around the World
and as Gideon Rachman has so lucidly proposed: "Authoritarian leaders have become a central feature of global politics."

Gideon Rachman's details • in his The Age of the Strongman classic • of Putin's rise to power and his time spent in Dresden, have most certainly filled in the gaps for me so to speak, as to how and why Canon got the inside track to the potential opportunity of utilising my Interactive Multimedia Bureau System, in Eastern Germany after 'the wall' came down, so to speak. I say 'the wall' having experienced same in a visit to Coburg some decades before, to realise that in most places it was only a fence and not a wall.

How and why did this new style of strongman leadership arrive? How likely is it to lead to war or economic collapse? And what forces are in place not only to keep these strongmen in check but to reverse the trend?

Everywhere they go, these leaders encourage a cult of personality. They are nationalists and social conservatives, with little tolerance for minorities, dissent or the interests of foreigners. At home, they claim to stand up for ordinary people against globalist elites; abroad, they posture as the embodiments of their nations. And they are not just operating in authoritarian political systems but have begun to emerge in the heartlands of liberal democracy.

Never forgetting that meanwhile we seriously have to consider FREEDOM in [IT]s broadest sense and realise the deep down reality of the Human Condition, as has been best illustrated by cartoonist Michael Leunig, in  his 1988 piece entitled: "GARDENS OF THE HUMAN CONDITION" IN the early summer of 2017, a US coast guard lieutenant Christopher Hasson had an idea.

He had been trying to figure out an effective way of killing billions of people – “almost every last person on Earth” – but found himself coming up against the daunting logistics of such a task.

He suspected “a plague would be most successful”, but didn’t know how to get his hands on enough Spanish flu, botulism or anthrax. His idea, he wrote in a draft email from 2 June of that year, would be to “start with biological attacks followed by attack on food supply”. He acknowledged the plan needed more research.

While horrifying in their ambition, Hasson’s plans, gleaned from email drafts, are scatterbrained and bear the hallmarks of a person still trying to figure things out. His tentative plans, outlined mostly in emails to himself, were thwarted when he was arrested last month on firearms and drugs charges and investigators discovered his inner life as a neo-Nazi and his plans for mass murder – along with a huge cache of weapons and a hit list of prominent Democrats and media figures. 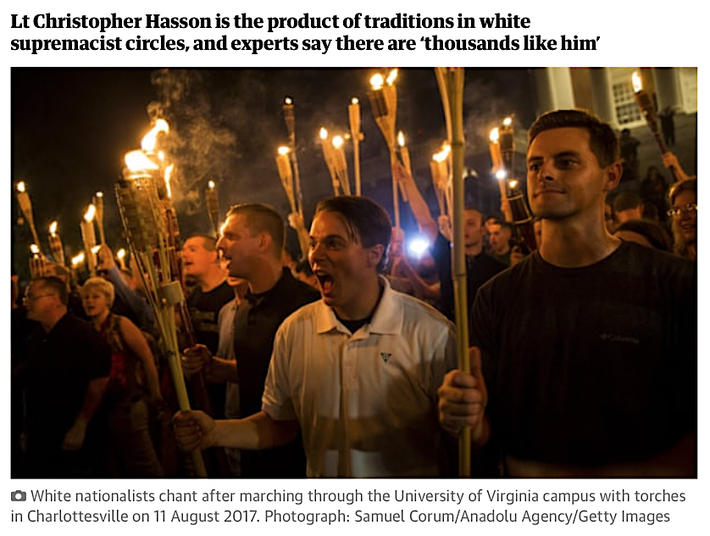 PUTIN's APOCALYPTIC VISION • The golden billion “divides the world into first- and second-class people and is therefore essentially racist and neocolonial,” Putin continued Wednesday, adding that “the underlying globalist and pseudo-liberal ideology is becoming increasingly more like totalitarianism and is restraining creative endeavor and free historical creation.” 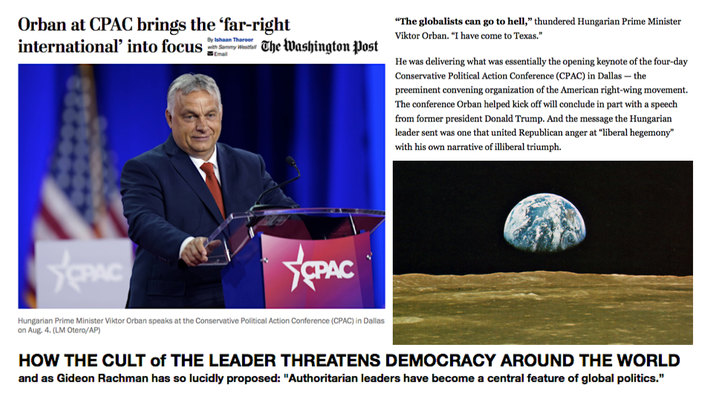 "HELLO, DICTATOR" is an unusual greeting to

extend to the head of an EU member state •

but those were the words used by the President

of the European Commission Jean-Claude Junker,

as he welcomed Hungary's prime minister to an

smooth over a deeply uncomfortable situation,

because the EU is meant to be a community of