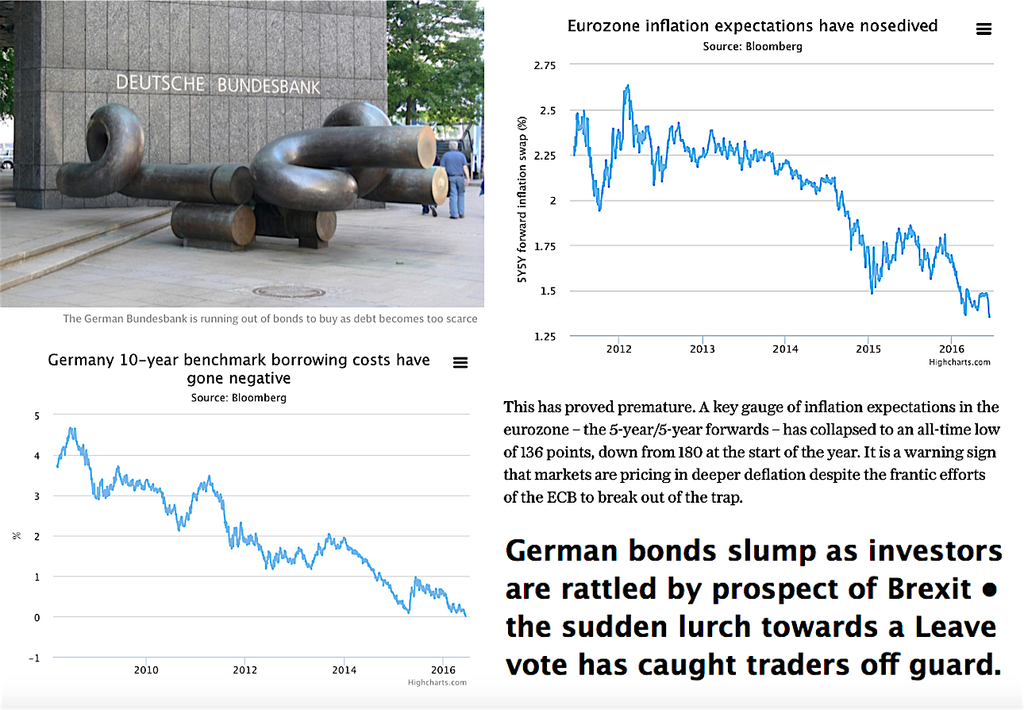 ... have fallen below zero for the time in history as Brexit fears send

investors scurrying into safe-havens, and Europe slides deeper into the

psychological trap of deflation. The eurozone is rapidly running out of

mops up the debt market under its quantitative easing programme, leaving

liabilities. Yields tumbled across the eurozone’s core states and the Nordic

bloc, briefly touching minus 0.006pc in Germany.  Two thirds of the entire

The pattern is all too familiar to economists in Japan, where bond yields

have been sliding for a quarter of a century and are still falling, reaching

-0.19pc on ten-year maturities this week. The proverbial graveyard is

full of traders that tried to bet against this trend, misjudging the

have been among the biggest buyers of Bunds and core-EMU bonds.

“When nobody else was long, they were buying by the bucket load,”

said one trader. Ominously, the yields of high-debt states on the eurozone

periphery have ratcheting up over recent days, as have Polish and Balkan

yields, a warning sign of where stress may lies if Britain votes to leave the

Polls showing the Leave campaign pulling ahead have astonished investors

overseas, and even in the City of London where the financial subculture is

like a foreign country. “It is Brexit that has lit a fire under this,” said

“There has been this deep-seated complacency among investors –

almost arrogance – that the British would come to their senses, see

reason, and go along with the status quo. Now they realise that it is

on a knife-edge. The question they are asking is whether Brexit is the

end of the European Union. They fear that it could be a Black Swan

event for financial markets” he said.

with a large short position on the bond market, many taking out complex

“There is a big short-squeeze going on. They just didn’t think yields

could fall any further,” said Marc Ostwald, a bond veteran at ADM.