THE FLOW OF ORIGINAL THINKING 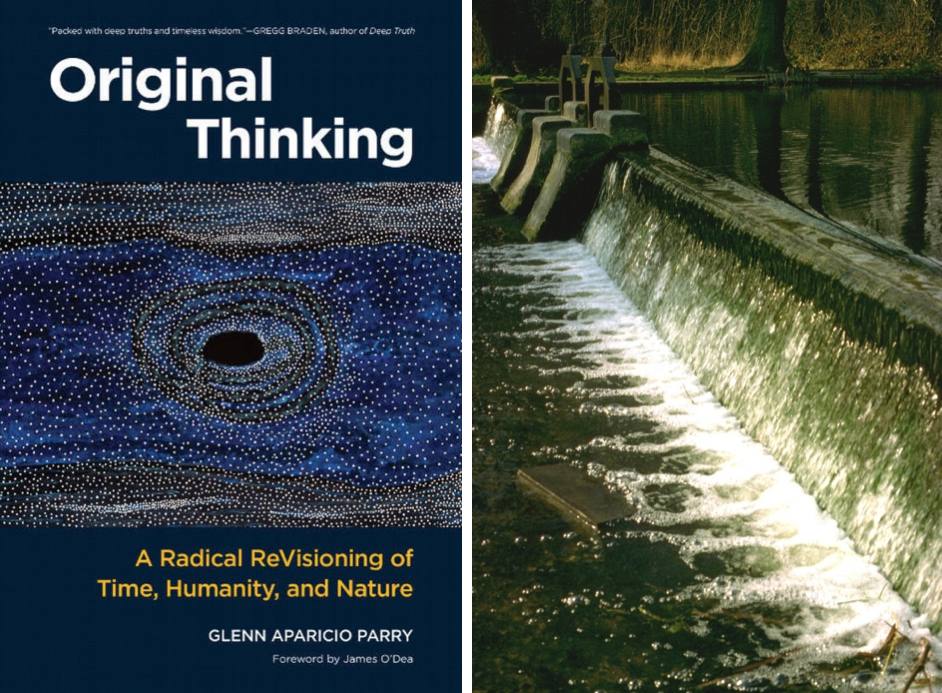 watersheds and rivers above all else, because nothing else could be more

important. ONLY 3% of the water on the planet is of the fresh water

category and of that, less than three-tenths of 1% is free flowing (the

that free-flowing water is polluted. The restoration of a river can often be

accomplished by simply removing dams. Damming rivers is damaging to

everything: to the river, to the fish, to the trees and ecosystems around

the river, and to human beings too. THE NATURE of WATER is to FLOW.

This article was adapted from Original Thinking: A Radical ReVisioning

of Time, Humanity, and Nature by Glenn Aparicio Parry, and is reprinted

with the permission of North Atlantic Books © 2015.

notebooks with observations. He found that, amongst other things,

[water] percolates through all porous bodies. Against its fury no human defence avails, or if it should avail it is not for long. In its rapid course it often serves as a support to things heavier than itself. It can lift itself up by movement or bound as far as it sinks down. It submerges with itself in headlong course things lighter than itself. The mastery of its course is sometimes on the surface, sometimes in the centre, sometimes at the bottom. One portion rises over the transverse course of another, and but for this the surfaces of the running waters would be without undulations. Every small obstacle whether on its bank or in its bed will be the cause of the falling away of the bank or bed opposite to it.

When water does all these things in a seemingly effortless way, is it merely a mechanical

reaction to circumstances, or is it a form of intelligence that thinks and makes fluid

decisions that embody an active balancing process? I would opt for the latter. I believe

water is as alive and conscious as you or I. If this seems hard to accept, why is water

outside the human body it is considered inert or dead? It would be absurd to say that

water within us is not alive, because we are made up of 70% water. But what exactly is

the difference between the water inside and the water outside the body? If there is none,

why is only the water within us considered to be alive? The same could be said for air or

any of the other elements.

WHY do we separate our inner body and outer world in this manner?

All the elements act in similar ways whether they are inside or outside the human body,

which is, in part, why human beings are considered the microcosm of the macrocosm.

This is something Leonardo da Vinci also realised. In his notebooks, he wrote:

Man has been called by the ancients a lesser world, and indeed the term is rightly applied, seeing that if man is compounded of earth, water, air and fire, this body of the earth is the same; and as man has within himself bones as a stay and framework for the flesh, so the world has the rocks which are the supports of the earth; as man has within him a pool of blood wherein the lungs as he breathes expand and contract, so the body of the earth has its ocean, which also rises and falls every six hours with the breathing of the world; as from the said pool of blood proceed the veins which spread their branches through the human body, in just the same manner the ocean fills the body of the earth with an infinite number of veins of water.

I love poring through the notebooks of da Vinci, particularly when he speaks about water.

Water is life, water is us, and until we realise this we will never change our ways, the ways

that are threatening to destroy us. For if we do not realise that water is life, and we

than the water inside our bodies, we will continue to disrespect the bodies of water on

Earth, and we will continue to pollute the water, which only ends up harming ourselves

because we are the water that we are polluting.

WATER is our CLOSEST RELATIVE; we can no longer pretend to distance ourselves from

her or to degrade her into a mere utilitarian resource – an abstract other. Water has the

right to be; she has the right to exist in the way Nature intended, serving all of life.

wastes, we are pursuing our short-term cash flow at the expense of the life force on

Earth for the longer term. We do not own the water, the land, the air, the fire. These

are simply not ours to own, because they are the essence of all life, not just [y]ours.