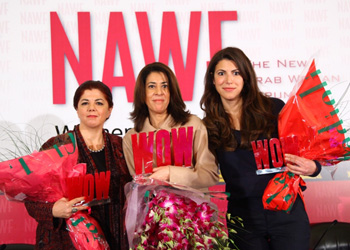 A new Arab woman is emerging from decades of under representation in all walks of life. A more empowered, educated, engaged, and capable Arab woman is making her presence felt across the whole, political, economic, social and cultural spectrum. In the last few years, Arab women have been gaining more power and influence and achieving more success in advancing their agenda. And many believe that a new era is in the making where Arab women are forging ahead in their endeavor to erase the existing deficit they suffer from in politics, business and public administration - and society. The rise of women in Arab societies is expected to be a major factor in determining whether Arab countries can move up the ladder of economic development and become economically more competitive in science and technology on a global scale.

To capture the transformation taking place in the world of Arab women, to identify emerging trends and to provide a conducive platform to debate major aspects of the lives of Arab women, The New Arab Woman Forum will be held on 22-23 October 2007 in Dubai.

The Forum is organized by "Al-Iktissad Wal-Aamal Group", the leading conference organizers in the Arab countries, and "Al Hasnaa" magazine, in cooperation with the League of Arab States, the United Nations, the Economic and Social Commission for Western Asia (ESCWA), Dubai Establishment for Women Development, the Arab International Women's Forum and V-Day Karama. It will bring together more than 500 high profile delegates including ruling families' members, first ladies, women ministers, parliamentary members and corporate executives, renowned actors and artists, journalists and NGOs' leaders.

This new conference, hosted in Dubai, shows again how the emergence of new arab Women is an absolutely crucial factor for the next evolutionary steps in Arab World. Its great that again Dubai fullfils its responsibility to open windows for arab World and facilitates innovative processes of all kind.

The Forum is organized by Al-Iktissad Group, in cooperation with the General Secretariat of the Arab League, ESCWA, V-Day Karama, Diplomatic Ladies Association - Dubai and North Emirates and media partner MBC1.

The forum emphasizes the fundamental role of the Arab woman and her various powers and abilities in
leadership, management, politics, business, education, media, beauty, and the problems she encounters.
The New Arab Women Forum


The New Arab Woman will bring together more than 500 high profile
delegates and speakers from 30 Arab and foreign countries. Invitees
include women government ministers and parliamentarians, NGO heads, and
renowned actresses, artists and journalists, as well as businessmen and
other specialists. The forum promises to be one of the major events on
the 2007 conference agenda, combining relevance, caliber, advantage,
placement power and excellent organization.

Also among the participants will be Lebanese singer Nancy Ajram, and Egyptian actor Hussein Fahmi.

“The role of Arab women is no longer limited only to building a family.
She now plays a vital role in steering the change to become an
effective member in facing current and future challenges,” said Mazen
Hayek, MBC Group Director of Marketing, Public Relations and commercial.

“MBC Group has always been a pioneer in encouraging Arab women to
innovate and play a leading role in society,” added Hayek. “Our values
of integrity, trust, responsibility, transparency and innovation, are
reflected in our belief in Arab women’s capabilities and commitment,
and the positive role they play in developing society. As a group, MBC
has been the motivating force behind the rise of many women who have
now become icons in the “who’s who” of Arab influencers. Women who have
succeeded in reaching people and promoting change through the small
screen.”

Faysal Abou Zaki, deputy general manager of Al-Iktissad Wal-Aamal Group, said: “The subject of the Arab woman and
her present and future role in Arab society and economic life is
undoubtedly one of the major and most important topics that should be
discussed in depth in our region today. And there is no question that
an expanding role for women is vital for the future of Arab societies
and economies, as well as their ability to grow and develop, especially
in terms of education and health care and the level of women’s
participation in the jobs market.

“Al-Iktissad Wal-Aamal Group has chosen to participate in the organization of the New Arab Woman
Forum not only because Al-Hasnaa magazine is member of the group’s
family of publications, but also because part of the group’s mission is
to bring new ideas to the fore and to encourage the debate of issues of
the hour at a time when the Arab world is going through significant
political, economic and social changes that coincide with the
accelerated march of globalization.”

Nadine Abou Zaki, editor-in-chief of Al Hasnaa and executive chair of The New Arab Woman
Forum, said: “We made sure the topics discussed in the forum are vital
and important issues for Arab women, and the approach to dealing with
them and the challenges that they face in developing its role and
developing Arab societies. A duty remains upon the Arab woman, however,
and this is to know how to develop and act accordingly”.

The subjects of the forum revolve around basic topics that spotlight the
role of Arab women in different economic, social and political areas.
The sessions will focus on the role of women in business, maternity,
women and education, investment in social development, woman and the
public, women and media, and women and beauty.

its great to see now that this post has with over 8400 views the strongest viewer resonance at my blog on Zaadz/Gaia since 2006.

I consider Arab Women emergence as one of the strongest drivers of Arab growth now and in future. This such agreat force that its stragne it has not found more attention in global media and public
awareness.

I know its a force to reckon with!

“… Arab WomenThis is another new integral initiative for the Middle East. We invited one of the founders of the Human Potential movement, Jean Houston, to Dubai in November to
offer her “Social Artistry for the Middle East, a new Kind of
Leadership.” Jean addressed Arab women in a letter I took with me in
April to Dubai saying:

This is the most important time in human history, and one in which Arab women have the opportunity to play a
critical role in keeping with their culture, and yet will enhance the
life and empowerment of women everywhere. We must remember however,
that for a new world to be born we have to bring a new mind to bear.
Critical to this is the rich mind style of women that has been
gestating in the womb of preparatory time, lo these many millennia.

Jean’s social artistry has been used by the United Nations Development
programs to train leaders for the complexities of the 21st century. We
feel that this will begin to seed the consciousness of Arab women in
the possibilities of their critical contribution to Arab emergence.
Although it may remain largely hidden to western eyes, many Arab women
are already initiating change with individual programs.
My integral vision for the feminine in the Arab world is to fuse together
these fragmented efforts into a coherent whole, bringing the
process-oriented, intuitive, feminine into the realm of Arab emergence.
Such emergence will be circular, empathic and narrative added to the
linear, sequential, and objective nature of the masculine, activating
the holonic vision for the whole society.”

Shulamit Aloni passed away at age 85. A brilliant, beautiful and brave woman. An early founder

and leader of the civil rights and peace movements in Israel, for many years she was the leader

of the Meretz party that Meir Margalit represented in the Jerusalem City Council.

same policy, that one cannot be sustained without the other, that the continued Israeli

converting Israel into an apartheid state, and that this process is a grave and sad betrayal of

as DESTRUCTIVE and that any CONSTRUCTIVE CRITICISM is therefore INVALID & UNACCEPTABLE.

May her memory be a blessing.