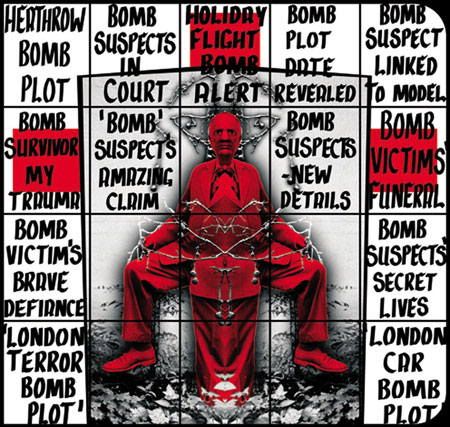 In line with the Gilbert and George tradition, the black, white and red images feature the artists themselves. The pair said: 'Six Bomb Pictures are the most chilling pictures we have created to date. 'We believe that as artists we were able to bring something special in thoughts and feelings to this subject, something the media, religious leaders and politicians find difficult to do.' All contain sandwich board posters with headlines from London's Evening Standard newspaper containing the words bomber, bombs, bombing, bomb and terror. One of the pieces, Bomb, is a 14-metre triptych that features the London plane tree, with the seeds of the tree referring to regeneration and hope.

Yet in the current context of the struggle in Iraq and the pervasive terror threat that is the fallout of September 11, where are the great works of contemporary art that respond to it? Theatre has risen to the challenge with prolific, even exhausting enthusiasm, David Hare's The Vertical Hour being the latest example. Filmmakers have brought us the sobering United 93 and World Trade Center. A recent survey of 2007's upcoming novels noted one dominant theme: war. But the offerings of the art world have been underwhelming.

Leading artists are starting to engage with the subject, but the shift has been slow. Today a new work by Yinka Shonibare (MBE, and previous Turner nominee) will be unfurled at Jubilee Garden: a flag commissioned by the Hayward Gallery.

of the First World War.

But what will that great commemoration of the Great War be like ? Buckminster Fuller's own CRITICAL PATH to the application of

"rite of passage to 4D", requires THE SWITCH from Gregorian

universal natural processes, that will enable Human[KIND] to

re-connect with the 4D[TIME] heart-beat of NATURE, to then

maximise access to the collective abundance of energy that is

potentially available - which will subsequently address the

essential dilemma of [our]TIME and provide THE mechanism of

action, for responsible citiZENs, whereby they can rise to meet

this ultimate challenge to our future of [NOW] - for the mutual

benefit of ALL LIFE as [ONE].