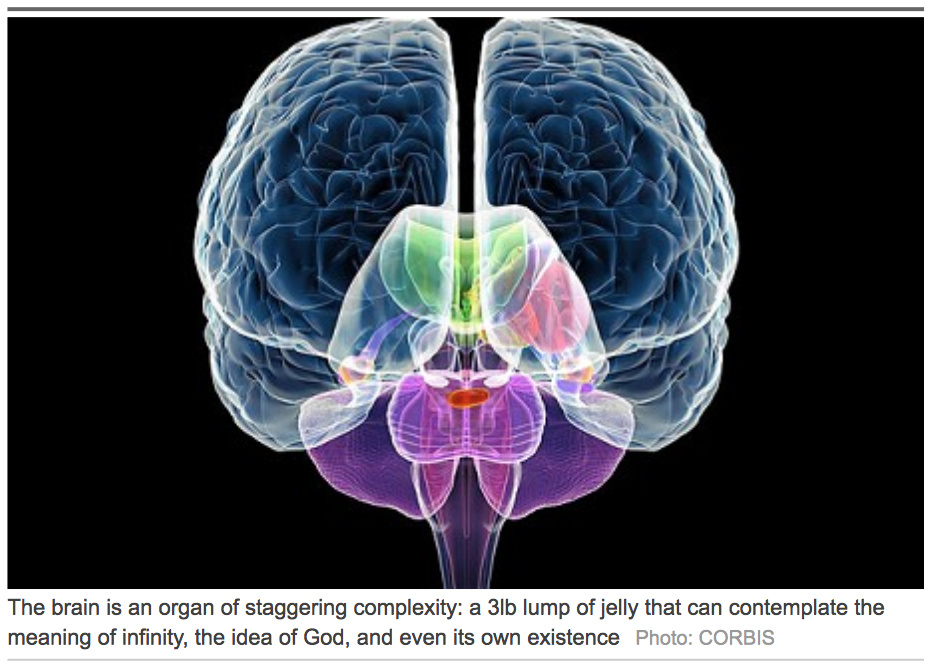 life-long urge to have his left arm amputated below the elbow. He has the

arm removed and feels much better. Another man loses his arm in a car

accident, but still feel its ghostly presence; this phantom limb is clenched

in a painfully awkward position. A third man, a student of mine, makes a

remarkable recovery from a coma, only to become convinced that his

mother and father are impostors.

All three case studies are fascinating. Yet as I argue in my new book,

The Tell-Tale Brain, they can also teach us a great deal about how the

brain does its near-miraculous work. This is an organ of staggering

complexity: a 3lb lump of jelly that can contemplate the meaning of

infinity, the idea of GOD, and even its own existence.

is surely one of the last great mysteries in science. Yet, by studying the

brain, whether from injury, stroke, or malfunctioning genes, you can pin

down the functions that this small region governs, and begin to figure out

how it works and how it interacts with other regions. What this means is

that strange neurological symptoms have the potential to take our

understanding in a new direction.

with a patient whose initials were "HM". She found that damage to the

form new memories. So instead of asking vague questions such as,

"How is memory stored in the brain?" she could pin the process down to

the hippocampus. Other scientists were then able to use this to explore

the cellular and molecular mechanisms of memory formation.

One principle that often crops up is the importance of evolution, especially

hijacked for another. As the great biologist Theodosius Dobzhansky said,

"Nothing in biology makes any sense except in the light of evolution."

classic case of apotemnophilia [a neurological disorder in which a sane

and rational individual wants a healthy limb or limbs to be amputated].

Many far-fetched Freudian ideas have been proposed to explain this

condition (including the idea that the amputation stump would resemble

a large penis). But the real answer is genetic. It turns out that the right

hemisphere of the brain contains a complete representation of your

Our brain-imaging experiments showed that with this particular patient,

from the arm had nowhere to go to, and the patient experienced it as

"over-present". Similar changes in body images might even explain the

desire that transsexuals have to have their penis amputated. Phantom

limbs [the limb has been removed, but the patient feels its presence] are

more common – and in some cases, the ghostly arm is paralysed, and

fixed in a very painful position. Often, this can be solved surprisingly

simply: propping up a mirror in front of the patient enabled us to use the

limb had been resurrected and was obeying the brain's command.

In many cases, this relieves the pain. Astonishingly, even real pain in a

paralysed arm – after a stroke, for example – can be relieved by techniques

such as visual feedback, demonstrating the brain's ability to reorganise

itself. In the case of the patient who failed to recognise his parents –

anatomical: the fibres that connected his amygdala [an area of the brain

linked to mental and emotional state] to his fusiform gyrus, part of the

temporal lobe where faces are first identified from visual input, had been

partially damaged. He still recognised his mother – but link between

emotion and visual perception had been severed. Failing to feel the

expected warmth, his brain had concluded that she had to be an impostor.

Put her on the phone, and he recognised her immediately.

Or consider a fourth condition: synaesthesia, when otherwise normal

people get their senses muddled up, seeing vivid colours when looking

at printed numbers or listening to musical tones. The condition runs in

families and is seven or eight times more common among artists, poets,

novelists and other creative people. But why? Well, it turns out that the

colour area and the number area in the brain are very close to each other;

we found that synaesthetes get "cross-wires". The explanation is that the

brain of a foetus contains a florid excess of connections, which are pruned

to create the architecture of the adult brain. If these "pruning genes" fail,

it leaves excess connections, which cause cross-activation between number

and colour. If the same genes are diffusely expressed, the result is excess

connectivity throughout the brain – even between far–flung regions.

Assuming that high-level concepts are represented in different parts of

the brain, such excess connections would create an opportunity for linking

seemingly unrelated ideas. This would explain the sevenfold higher

also the wide prevalence of the apparently useless synaesthesia gene,

given the creativity it stirs up in outlying members of the population.

Another of the many areas in which anatomy, evolution and genetics collide

is the issue of "mirror neurons". When you reach for a chocolate bar or pull

for and orchestrate this semi-skilled movement. But some of these cells –

same action; allowing the neuron to perform a sort of virtual reality

simulation of the action: "The same neuron is firing in my brain as would

fire if I myself were to reach for a peanut."

In order for us to empathise with each other – visually and, I would argue,

metaphorically – such neurons play a crucial role. In particular, they are a

prerequisite for imitating another person's sequence of skilled actions,

something humans excel at. A polar bear might have taken a few hundred

thousand years to evolve a fur coat through natural selection, but a human

and skin it. He can then transmit the skill "vertically" (to his own offspring)

or "horizontally", to his peers. Indeed, it was this kind of sophisticated

imitation that accelerated the emergence of culture in early hominids.

This kind of research can help explain why the human brain is unique,

especially in its simultaneous capacity for grasp of self-awareness and

"other awareness". Apes, for example, have mirror neurons too, but they

may not be sophisticated enough or connected adequately to other brain

structures to permit the imitation of complex skills and accurately view

others (and oneself) as beings with minds and intentions.

Based on the cases I have seen, I would argue that there are anatomical

and supramarginal gyrus, which split off from the more ancient inferior

parietal lobule as it grew during our evolution. These two areas are

involved, respectively, in understanding and performing skills, such as

hafting an axe or opening a champagne bottle, and in human abilities

such as reading, writing, arithmetic and linguistic comprehension.

Given the state of the research, this is the most speculative theory I have

put forward. But even if it were to prove false, it should provide a starting

aspects of the human mind.

As Darwin said: "False views, if supported by some evidence, do little harm, for everyone takes a salutary pleasure in proving their falseness; and when this is done, one path towards error is closed and the road to truth is often at the same time opened ".

Prof Vilayanur S Ramachandran is the director of the
Center for the Brain at the University of California, San Diego.