The probably greatest political misconception of our time is that the

public is insurmountably divided over Brexit. How is this a misconception

when the two sides are constantly at each other’s throats? Because when

both sides are fighting for the same things: international trade, political

moderation and an intact democracy.

at delivering what everyone wants. The EU side is bound to eventually lose

this perception battle because all political Megaprojects – the EU included –

rely more on mythological promises than on substance. In the end realities

on the ground will decide how voters see things. However, due to the

massive establishment powers of interpretation, myths can be sustained

for quite some time. What we are experiencing now is a transition period

marked by – as such periods always are – myth busting. This is when the

establishment movers and shakers cling to power by telling voters that

disaster will follow if abandoning the old power structure.

Which is precisely how right-wingers, during the 1920s, managed to

obstruct left-wingers from gaining real influence even after the democratic

breakthrough. With roles reversed the 1970s turned into another decade

when an establishment used scaremongering to impede excess backtracking.

When the establishment finally had to yield powers it benefitted, on both

occasions, just about everyone.

but also most establishment apologists (Remainers). Meaning that the best

Seven such myths are arguably particularly deadly. How so? Because all of them are so seductive that they in a big way help to sustain the highly polarising EU edifice. 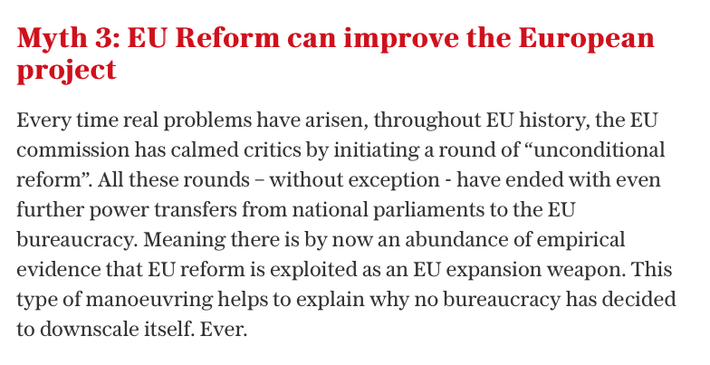 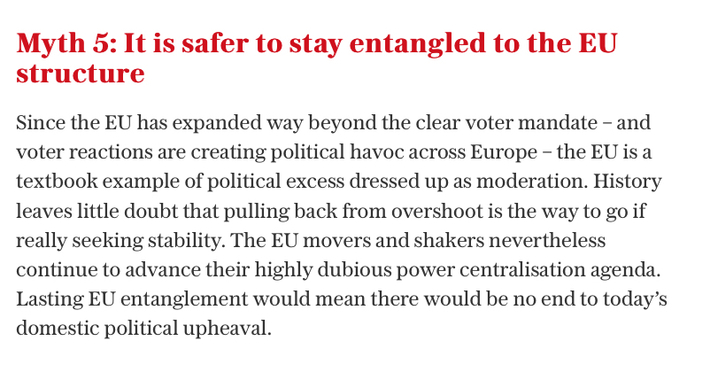