OH HOW THE DEPRAVITY of HUMAN KIND ... 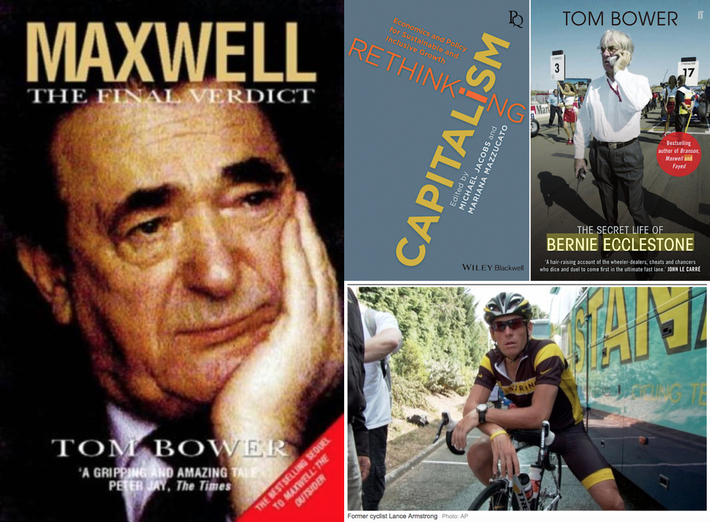 into self-doubt rather than face his own demons"

Having watched both of the Lance Armstrong television documentaries,

life characters, who bullied their way to supposed success, without one jot

or tittle of consideration of the consequences of their actions, let alone the

equipment, that Computer Integrated Solutions and I were approached by

John Bloom on behalf of Bernie Ecclestone, with a proposal for utilising the

system for Formula One.

of POLITICS, which supposedly represents the interests of the 7.5 billion

individuals of [y]our species, homo sapiens sapiens, by way of a model of

representative democracy • which IS IN DENIAL of those 7.5 billion

individuals, 'connessione' with NATURE • have resulted in an awakening

of 200 million or more 'cultural creatives', during this last renaissance of

[y]our species, to the fact that EVERY ASPECT of the OLD ORDER MINDSET

IS in[DEED] DEAD in the WATER, to the point of understanding the need

to implement a NEW SYSTEM of ECONOMICS which democratically [RE]flects

our 'connessione' with NATURE. 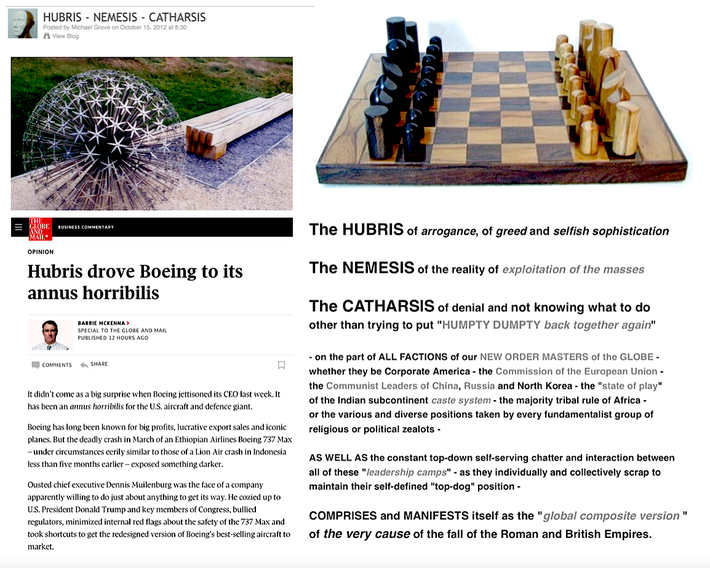 When the world’s major air safety regulators grounded the plane earlier this year, Boeing kept building more, wrongly assuming that the Trump administration would clear it to fly. Through it all, the company repeatedly assured anxious airlines that certification was imminent.

Hubris is finally catching up to Boeing. The crisis has already cost the company US$8-billion in lost revenue. Production of the 737 Max has been suspended to prevent a further cash drain. It’s still unclear when the plane will fly again.

Boeing’s behaviour – before and after the crash – suggests a company more focused on changing the rules of the game than improving its own game. Its corporate instinct is to throw its weight around instead of simply doing the right thing. Quality control and investment in R&D took a back seat to political donations and lobbying.

As recently as mid-December, Mr. Muilenburg was still putting pressure on U.S. Federal Aviation Administration (FAA) officials to approve deliveries of the grounded 737 Max – even though Boeing has not completed fixes to the model’s flight-control software, The New York Times reported last week.

Boeing’s bad year is a cautionary tale for companies that stake their futures on the vagaries of politics. Excessive dependence on governments – for contracts, financial help or political favours – is a high-stakes game. It causes companies to look for the easy way out rather than fessing up to mistakes and focusing on business fundamentals.

And, for a while, life was good. The Trump tax cuts handed Boeing a US$1.1-billion windfall in 2017. A year later, Congress passed legislation that limited the role of the FAA in approving the design of new airplanes. In 2017 alone, Boeing won more than US$20-billion in U.S. government contracts, including a US$4-billion order for two new Air Force One presidential jets. And Mr. Trump appointed Patrick Shanahan, a long-time Boeing executive, as his deputy defence secretary. For part of this year, Mr. Shanahan was elevated to acting defence secretary, overseeing the massive Pentagon budget.

In 2018, Boeing’s sales broke the US$100-billion mark for the first time, on the strength of record aircraft deliveries.

It was a symbiotic relationship. Mr. Trump repeatedly used Boeing plants as a backdrop to brag about how well his tax and trade policies were working.

“God bless you, may God bless the United States of America, and God bless Boeing,” Mr. Trump said in 2017 at one of the company’s plants near Charleston, S.C.

But the relationship has soured. Boeing's struggles reflect badly on Mr. Trump, who has championed deregulation and trade protections for U.S. manufacturers.

As it bid farewell to Mr. Muilenburg, Boeing pledged to “chart a new direction.” But it offered few specifics.

Like Mr. Trump, the company has repeatedly overpromised and underdelivered. As the 737 Max crisis worsened, Boeing alienated the very people it needed, including politicians, regulators, investors and major customers such as Air Canada and WestJet Airlines. Most troubling Boeing has lost the confidence of the travelling public. Company polls show that 40 per cent of frequent fliers around the world say they would not fly on a 737 Max.

Clearly, Boeing still has a lot of work to do if it wants to put 2019 behind it. 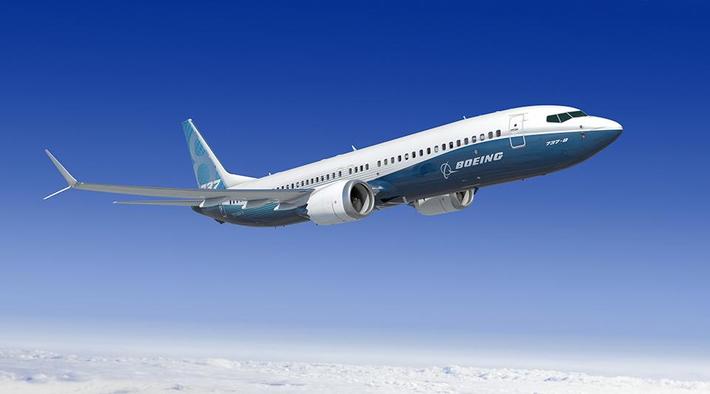 Boeing needs to focus on engineering

Industry experts place much of the blame for Boeing's current problems on a culture focused on maximizing cash flow through aggressive cost cutting and conservative capital allocation. After the "moonshot" 787 Dreamliner program came in late and way over budget, Boeing opted to replace the aging 737 NG and 777 aircraft families with updated derivatives rather than all-new designs.

Pivoting away from a relentless focus on efficiency won't be easy. Boeing generated an incredible $13.6 billion of free cash flow in 2018. Before the 737 MAX grounding, it appeared to be on pace for further cash flow growth in 2019 and 2020, and Boeing stock's valuation still implies that investors expect cash flow to reach new highs within the foreseeable future.

However, if Boeing were to ramp up R&D spending and replace its aircraft platforms more frequently (increasing CapEx and the incremental costs of starting up production of new aircraft types), free cash flow might never recover to the 2018 high. Sooner or later, that would probably lead to a backlash from disappointed investors.

Thus, future Boeing CEOs will have to choose carefully when to support increased investment and a faster cycle of technology upgrades and when it is appropriate to focus on maximizing cash flow. It will be an extremely difficult role to fill. Indeed, the ultimate goal of continuing to grow cash flow while also making necessary investments in new technology may prove unattainable in the long run. As we rapidly approach the end of the first whole year of the Boeing 737 MAX saga and I reflect on my years of *zBLOGing conversational warnings about the Consequences of Consequences of Complex Systems, I would offer this singularly most important independent source of Aviation News to those who would wish to follow related events as they unfold into the next decade particularly in regard to Raf S's comment that...

"I recognize the importance of Boeing in the economy and aviation and the many contributions to the aeronautical trades. I wish Boeing the best. BUT, after the MAX “accidents” appearing to be a consequence from bad management and bad product design – Boeing needs to clean up their act."