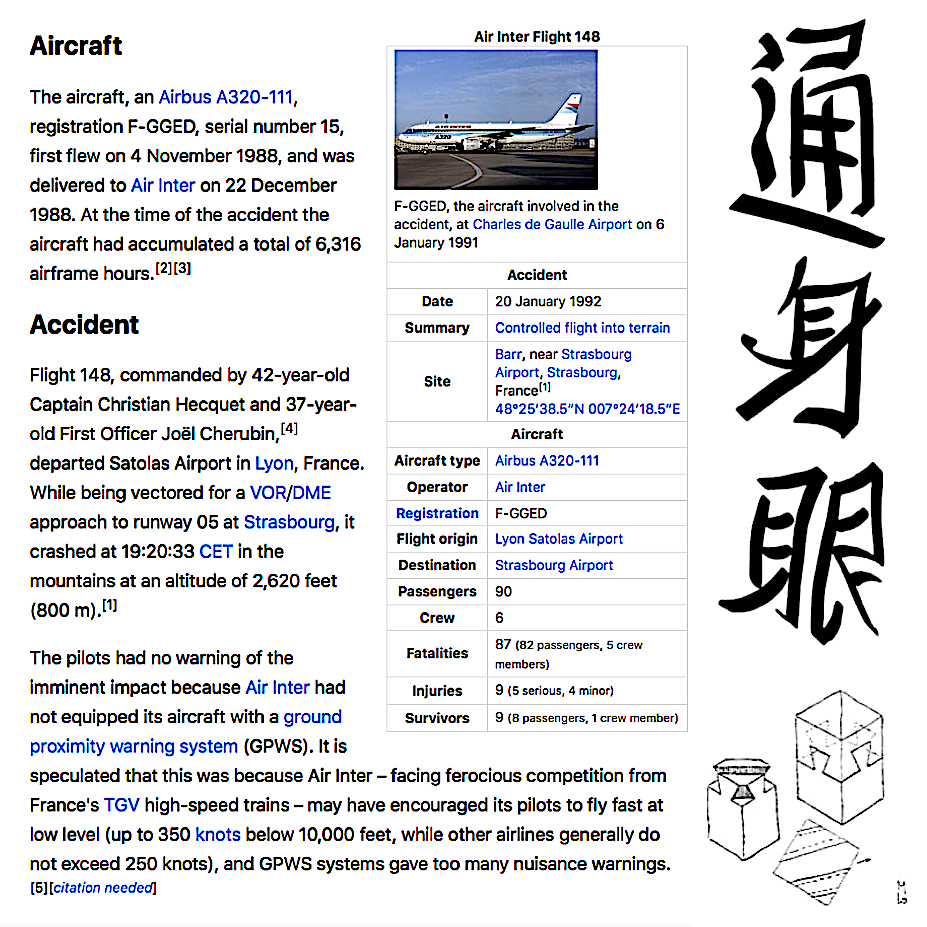 Passenger flight from Lyon Satolas Airport to Strasbourg Airport in France. On 20 January 1992, the aircraft operating the flight, an Airbus A320, crashed in the Vosges Mountains, France, near Mont Sainte-Odile, while circling to land at Strasbourg Airport. 87 of the 96 people on board were killed, while the remaining nine were all injured.

Accident investigators subsequently determined that there was no single cause of the accident, but rather multiple factors that contributed to the crash. On the approach to the airport Air Traffic Control incorrectly warned the crew that they were to the "right" of the runway, causing the flight crew to experience high workload. When investigators input the descent rate, which had been set into a flight simulator, the aircraft initially did not crash. Further investigation revealed, however, that when a small amount of turbulence was introduced, a safety feature of the autopilot further increased the descent rate, adding to the chain of events that led to the crash.[5]

... THIS was of course one of the first of several major accidents which henceforth led to a deeper understanding of Cockpit Resource Management [CRM] and the consequences of badly designed front-end instrumentation and the computerised systems that drove those displays, in the context of Pilot's Human Interface Experience.

Accident investigators recommended 35 changes in their report. Airbus modified the interface of the autopilot so that a vertical speed setting would be displayed as a four-digit number, preventing confusion with the Flight Path Angle mode.[7][8] The flight data recorder was upgraded so that it was able to withstand higher temperatures and for longer.[5]

The report also recommended that pilot training for the A320 should be enhanced and that GPWS systems should be installed on them.

The British Airline Pilots' Association (BALPA), which represents over 10,000 UK pilots, warned politicians that lethargy affecting captains and first officers presented the single biggest threat to plane passenger safety. The union said it wants airlines to use computer programmes to estimate pilots' fatigue levels based on their flight rosters, which are created weeks in advance of their duties.

Long working hours and regularly crossing different time zones are said to contribute towards severe tiredness inside plane cockpits. Under rules set by the European Aviation Standards Agency, which regulates working hours, pilots who declare they are too tired to safely lead a journey are not compelled to fly.

However, it is claimed aviators are still operating flight controls over fears they could be penalised or even lose their jobs if they report being too fatigued to work.