WHEN OUR THOUGHTS & EMOTIONS ARE ... 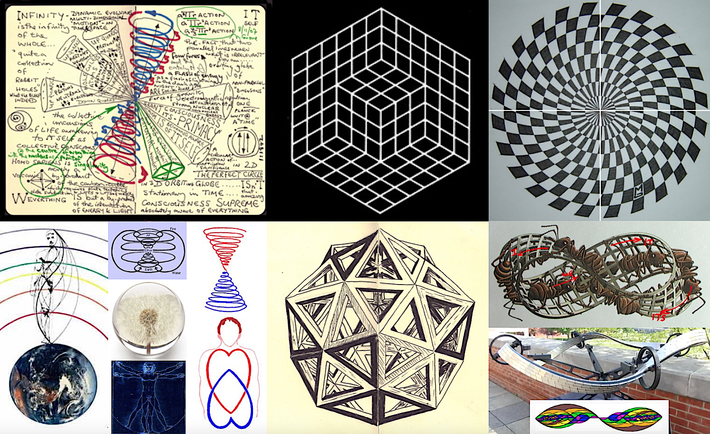 attuned to LOVE, a cascade of a Fibonacci series of harmonics is created that links the energy of the heart and mind to our own DNA. So emotion is really

energy, it is energy in motion, e-motion. Emotion is like a roller coaster

our very own DNA. The energy of our emotions moves between these scales

of long waves to short waves and is finally delivered to our DNA.

when all the waves are added up it creates a flat wave of zero Hertz, perfect

The Unified consciousness field is perfect stillness and unimaginable abundant

activity at the same time! They are two sides of the same coin, it’s like a snake

biting its own tail. It would explain how the universal consciousness was

accessed by so many geniuses like the greatest philosophers, scientist, artists

and musicians that have inspired us throughout the Ages.

that creates the material world! This universal consciousness that focuses

the waves into the zero point and keeps it spinning, it can be compared

with the GOD force.

Light in a straight line is energy, loving light bended around a focal point

of the world, like the Bible has always told us; we can now appreciate it

from a scientific perspective.

THERE ARE ONLY TWO RULES -
the journey begins & the journey continues
.
My grateful thanks to Anna Sclar's reference
to WE ARE ONE's Golden Ratio 'piece'.

Comment by Michael Grove on July 30, 2020 at 10:20
SO - can the question called THE HOLY GRAIL in physics- namely what geometry connects electric charge to gravity - ALSO be the scientific answer to what is the HOLY GRAIL (including gravity making measured) IN BLOOD?? ~ to which I would first suggest a reading of ...
THE SPARK in the MACHINE by D. Daniel Keown.
Dan Winter has in[DEED] proposed a radical + dramatically exciting answer which [IS] right now rattling the cage of physics around the world. A whole stable of physicists have joined him to explore the unified physics of Golden Ratio - testing his original hypothesis    that GOLDEN RATIO based SELF SIMILARITY is the ELECTRICAL  CAUSE OF GRAVITY!.
.