WHAT WENT WRONG INSIDE THE BOEING'S COCKPIT? "IF anybody ever tells you anything about an aeroplane

which is so bloody complicated you can't understand

was responsible for the design and development of the

range of Supermarine Flying Boats, which although in

itself, an important contribution to the realm of British

for his prowess in the world of high-speed flight and

particularly his involvement in the Schneider Trophy air

races, which ultimately culminated in the success of the

S5 programme, as a result of Mitchell having been granted

Royal Aircraft Establishment in Farnborough and the

and finally the S6, which was designed around a 2000bhp

Rolls Royce engine, all of which led to Mitchell's IDEA for

the Supermarine Spitfire. Oh how matters of safety

taking priority over expedition and profit have been

despatched into the annals of history and yet NO THING

has actually changed with regard to the Political and

Commercial influences over the lives of the PEOPLES of

Planet Earth, when it comes to the flying public.

There was nothing more the pilots could have done.

As alarms sounded in their cockpit, the captain and first officer struggled   to regain control of their stricken aircraft.

They were far too close to the ground, and needed to gain altitude. Yet when Capt Yared Getachew tried to guide the nose of the Boeing 737 upwards, an electronic system forced it down again.

Simply pulling back on his control column wasn’t enough. So he used a thumb switch as well, to adjust the aerodynamic balance of the plane, and encourage it to climb. But a few seconds later, those adjustments were automatically reversed.

The column was shaking in his hands, a mechanical warning that the aircraft was in danger of stalling and falling out of the sky. A harsh robotic voice called out “don’t sink” three times, indicating that the plane was losing height.

Together, he and First Officer Ahmednur Mohammed Omar worked quickly to find a solution. They flicked switches on the centre console to disable part of the electronics, and began using manual controls instead, in an attempt to make the plane fly normally.

Regaining control was difficult. By now the aircraft was gathering speed, and aerodynamic forces were building rapidly; it’s likely they had simply become too great for the pilots to fight against using manual controls.

Whatever the reason, they turned the electronics back on and Capt Getachew tried once more to raise the nose of the aircraft, using the thumb switch on his controls. With power assistance restored, the aircraft responded. Briefly it began to climb.

But then, inexorably, the process was reversed as the computers intervened yet again. Another alarm was now chirping urgently, warning that the speed of the plane had become dangerously high, as it began to dive towards the ground.

In desperation, Capt Getachew called on his co-pilot for help. Together, they hauled back on their control columns, using their combined strength, in a last-ditch effort to overcome the forces arrayed against them with sheer muscle power.

The dive became steeper and steeper, and the aircraft fell faster and faster, until it slammed into the ground at more than 500mph, just six minutes after taking off.

One hundred and fifty seven people from 35 different countries died.

From Canada, there were three generations of one family.

Kosha Vaidya and her husband Prerit Dixit were travelling with their two teenage daughters, Ashka and Anushka, as well as Kosha’s parents, Pannagesh and Hansini.

All had boarded the plane for an early morning flight from the Ethiopian capital Addis Ababa to Nairobi, in Kenya.

The weather was good, and the visibility was clear. The aircraft, a Boeing 737 Max 8, was new.

Just five months beforehand, a near identical Boeing 737 Max 8, operated by Indonesian carrier Lion Air, had set out on another routine journey from the Indonesian capital, Jakarta.

The flight to the western city of Pangkal Pinang was meant to last little more than an hour. But moments after taking off, the pilots found themselves in serious trouble.

They were fighting for control, mystified as the aircraft seemed to take on a mind of its own, trying to descend when it was supposed to be climbing.

They had no idea what was going on. Each time they tried to bring the nose up, their actions would be reversed a few seconds later as automatic systems forced it down again.

This happened more than 20 times, with the aircraft bucking erratically through the sky. Air traffic controllers became worried when they noticed on their radar screens that it was descending. On the radio, one of the pilots told them he had a “flight control problem”.

As the crew tried to work out what had gone wrong, they became even more confused, because their instruments were indicating different altitudes. They didn’t know how high the plane was, or how fast it was going.

Eventually, they lost control altogether. The aeroplane went into a steep dive that couldn’t be recovered, and crashed at high speed into the Java Sea.

One hundred and eighty nine people lost their lives.

Two remarkably similar accidents, just five months apart, involving the same brand new aircraft design. Within days of the second crash, investigators had noted “clear similarities” between them. So was there a common cause? 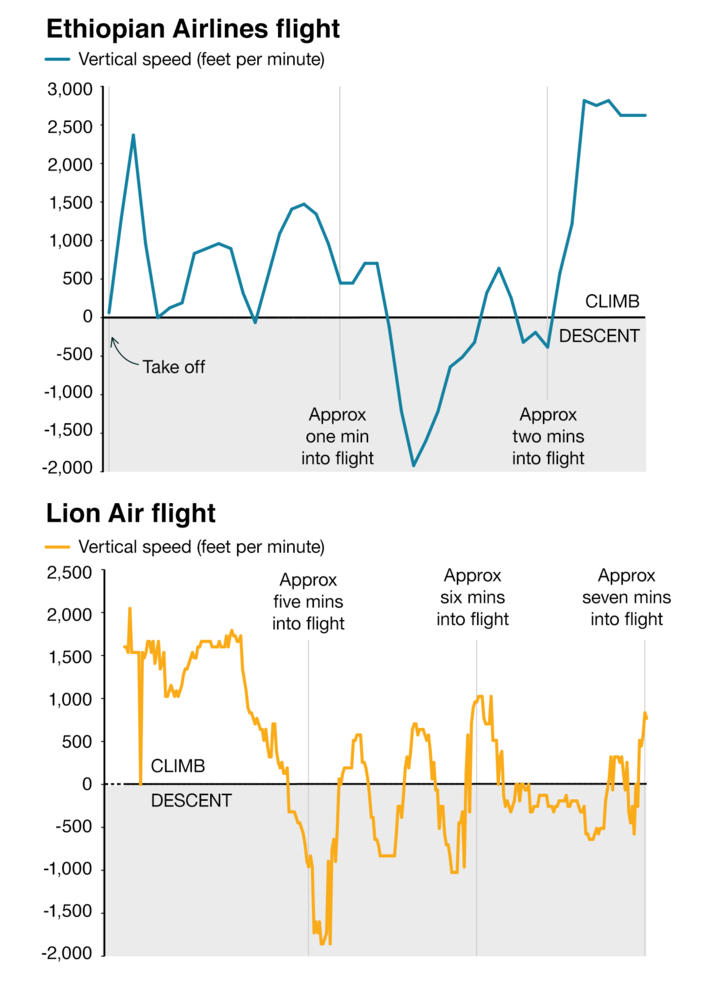 When an aircraft crashes, an investigation has to start quickly.

Relatives want answers. Airlines and manufacturers need to know if the same thing could happen again.

What investigators really want to find is the flight data recorder.

In the case of the Lion Air jet, this was recovered from the sea floor within days. It provided a wealth of detail about the doomed flight.

Suspicion quickly focused on a piece of flight control software designed to operate in the background, without the pilot even being aware of it.

It was meant to make the plane easier and more familiar to fly for pilots who were already used to the previous generation of Boeing 737. It was designed to curb a tendency for the 737 Max’s nose to rise too much, when it was already pitched up at a steep angle.

But it appeared to have been activated at the wrong time and to have forced the nose of the aircraft down when it was supposed to be climbing.

The stabilisers - small wings on either side of the tail - were being moved into the wrong position by the flight computer. When the crew tried to correct them, they simply moved back.

Boeing insisted its aircraft was safe, but issued a bulletin to airlines explaining what could happen, and what to do.

In their everyday work, pilots rely heavily on printed checklists, which set out step by step precisely how different operations should be carried out. When something goes wrong in the air, there are further checklists they can draw on, to help them diagnose and solve a range of different problems.

In this case, pilots were told to follow steps set out in an existing checklist which they are required to memorise, designed to help them deal with an abnormal situation affecting the stabilisers.

It told them to turn off power to the automatic control system, by flipping two cut-off switches. They could then operate the stabilisers manually, using a crank handle in the cockpit.

Boeing was confident that if pilots followed these instructions the plane could be flown safely. Nevertheless, it began developing new software to eradicate the problem.

This was still being worked on when Ethiopian Airlines flight 302 set out on its final journey.

The cause of the two accidents, we now know, was very probably the same.

And according to an interim report, the Ethiopian Airlines pilots reacted to the emergency as the manufacturer had told them to. But it didn’t save their lives, or those of their passengers.

Now, Boeing is facing serious questions - about whether it was right to assume the aircraft was safe, or whether it should have taken more radical steps after the Lion Air crash.

The 737 Max has been grounded.

The way in which pilots around the world are trained to deal with the increasingly high-tech systems aboard modern airliners is also being thrown into sharp relief.

And the close relationship between the aerospace giant and the US body that is meant to regulate the industry, the Federal Aviation Administration, has come under scrutiny as never before.

Families of the victims of Lion Air flight 610, visit an operations centre to look for personal items of their relatives. Jakarta, Indonesia.