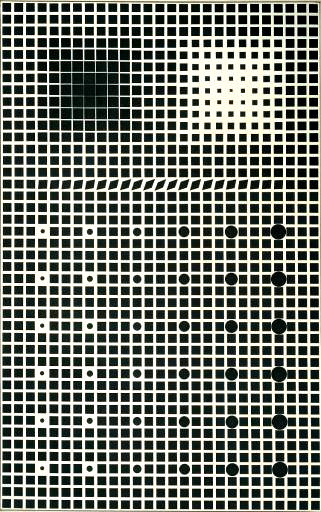 French painter of Hungarian descent (1906 - 1997). Victor Vasarely defined one of the most remarkable moments in the history of 20th century art. Vasarely was born in Pécs, Hungary, in 1906. He left Hungary and settled in Paris in 1930.

Vasarely wanted to create designs that were universal. A socialist, his goal was to produce an art that could be mass produced and affordable for everyone. He became fascinated with an art of pure visual perception without traditional themes and representational qualities.

"The expression "sense illusion" proves that we are not yet fully conscious,  or at least have not yet deemed necessary to incorporate the fact into our ordinary language, that the senses represent things neither wrongly nor correctly. All that can be truly said of the sense-organs is, that, under different circumstances they produce different sensations and perceptions. As these 'circumstances' now, are extremely various in character, being partly external (inherent in the objects), partly internal (inherent in the sensory organs), and partly interior (having their activity in the central organs), it can sometimes appear when we only notice the external circumstances as if the organ acted differently under the same conditions. And it is customary to call the unusual effects deceptions or illusions."

As Vasarely asked, "isn't optics, even if illusion, a part of kinetics?"

In March 15, 1997, he died at the age of 91, leaving behind a plastic legacy unrivaled within the domain of abstract geometrical kinetic art. 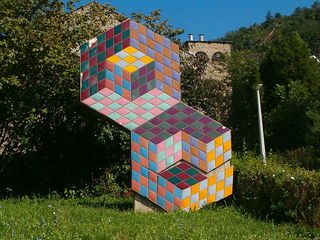 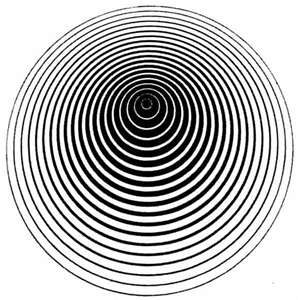 By 1947 Vasarely had changed his style completely and came to regard his first three years of painting as a false start. From then on Vasarely's work was abstract and increasingly based on geometry. He was working to devise a new pictorial language for the masses. He repeatedly studied the landscapes of the Breton island of Belle Isle, radically simplifying scenes to transform nature into geometric shapes.

Vasarely increasingly found his subject matter in the sciences—such as physics, biochemistry, and magnetic fields—and described his abstract art as "…poetic creations with palpable qualities capable of triggering emotional and imaginative processes in others." His art gave sensory forms to unperceivable phenomena. 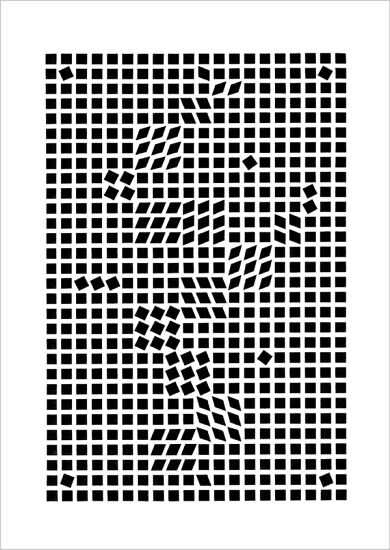 In the mid-1950s Vasarely began integrating architecture into his art and producing kinetic works, films and writings. The Denise René Gallery in 1955 had a pioneering show of kinetic art, "Le Movement." Among those represented were Vasarely, whose works employed the principle of optical movement.

Vasarely's concern with optical perception had lead him to explore the effects of motion, not of the art object but of the viewer in relation to it. His works were composed of several overlapped sheets of Plexiglas on which black designs had been painted. The slightest motion of the viewer made the design seem to change and move as well. In conjunction with the show Vasarely issued his Yellow Manifesto, in which he discussed his theories of color and perception.

In Vasarely's black-white period of 1951-1963, he used compositions of stripes, checks, circles, or lines to explore the illusionistic effects he could achieve by modifying his patterns to give the impression of surface movement or of concave or convex forms, as in Andromeda (1955-1958). At the same time he developed the idea of eliminating the premise of the figure-ground relation, the image or central motif set against a ground plane or an environment, by filling the entire surface with uniform optical stimulation. In conjunction with this he often reversed a composition by inverting the black-white or color relationships.

In 1965, he participated in the "Responsive Eye" exhibit at the New York Museum of Modern Art, dedicated exclusively to "Optical Art". This pictorial movement attached itself to the concept of suggesting motion without ever actually performing it. It instituted a new relationship between artist and spectator, where the observer cannot remain passive, he is free to interpret the image in as many visual scenarios ha can conceive. Received with great acclaim, the press and the public hailed Vasarely as the inventor and creator of "Op-Art". 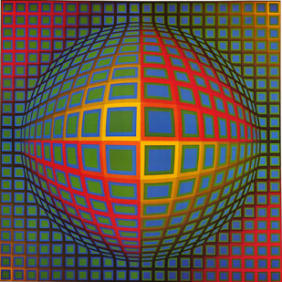 Vasarely felt that the uniqueness of a work of art and the artist's personal involvement in its execution were bourgeois notions. He worked in a manner that lent itself to mass production by modern technical processes. Limiting himself to flat lines, simple geometric shapes, and unmodulated color, Vasarely viewed himself as a "creator" of designs which could be inexpensively produced in the same, enlarged, or reduced scales.

This was reflected in his method of conception. Working on graph paper, Vasarely made notations of letters (for the shape to appear in a given graphed square) and numbers (one through 16 to indicate the shade or value of a particular hue or color). By using simple geometric shapes and hues that were modified by his established scale of shades, he or others could produce copies of a design. In this way he produced art which he believed could benefit all of society by being available and affordable. 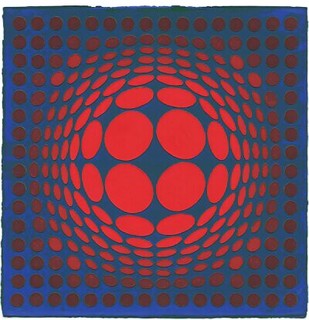 This claim for significance beyond personal aggrandizement found justification in the 1960s as Vasarely influenced groups of younger artists and his designs were widely reproduced in posters, fabrics and other images in mass circulation. While Op Art (Optical Art) had its zenith in the 1960s, Vasarely was recognized as its pioneer and greatest master. He continued to work in the Op Art style with an undiminished reputation into the 1980s and was widely honored. He established the Center for Architectonic Research and the Vasarely Foundation in Aix-en-Provence. In 1976 the Vasarely Museum was opened in the house in which the artist was born in Pécs, Hungary. To permanently house his works, the Vasarely Center was opened in New York City in 1978 and the Centre Vasarely opened in Oslo, Norway, in 1982. Vasarely's work in film and architectural design as well as his more famous art and graphic design earned him a prominent place in the history of modern art.

Peripheral drift and ot her types of illusions are often presented purely for amusement or as psychedelic art. However, optical illusions are also used to study how the human brain interprets visual data. From studying how these patterns create perceived motion, we can

better understand how the brain interprets motion. We can also gain knowledge about how a damaged brain fails to guide an individual's movement when they have difficulties perceiving motion in their environment. Motion illusions can be used in virtual reality (VR) as well as augmented reality (AR) applications, to properly guide individuals with problems tracking movement. Various types of optical illusions are used for a number of effects in VR and AR.