through The Great Matrix of Big History

For while there is no Great Chain of Being, as the medievals understood

it, there is most definitely a Great Matrix to which all beings belong.

universe is, but it is perhaps more instructive to pay attention to how

small entities can be. The known universe is as many orders of magnitude

smaller than us as it is larger. As physicist Richard Feynman famously

“there is a lot of room at the bottom.”

A MATRIX is a structure, medium, or environment in which something

develops. The Great Matrix is the warp and woof of the universe upon

which complexity  is woven. The universe is a web of a hundred billion

galaxies held together in a dynamic gravitational embrace. The tendency

galaxies spanning billions of light-years, but we should also remember

how enormous we are when compared with cells, molecules, atoms, and

centimeters, meters, and kilometers, which turns out to be about halfway

between the very small and the very large. The human scale is also the

blocks of atoms and molecules. The particle accelerator at CERN recreates

of matter. The sought-after “Grand Unified Theory” of fundamental physics

(“GUT” in the image) would unite the four fundamental forces - gravity,

electromagnetism, and the strong and weak atomic forces—connecting the

subatomic and the cosmic dimensions, much as Uroboros swallows its tail.

Ingenuity is simply information that does something creative, innovative, useful, and intelligent. The Latin root of the word “ingenuity” means “inborn,” as in “inborn genius.” Indeed, the natural world is full of inborn genius. The inborn intelligibility-intelligence of nature is the precondition for scientific discovery and human technologies. We are surrounded by what philosopher Daniel Dennett refers to as “competence without comprehension.” [11]

Most of our biological functions, including mental functions, occur without comprehension. Human consciousness is a recent development in evolutionary history. Human comprehension is a rapidly evolving flood of new knowledge in the many domains. We have only recently begun to comprehend our true place in the universe.

The ten dimensions of the great matrix give us ten ways to measure reality by time, size, matter, energetics, electromagnetism, sound, information-ingenuity, sentience-consciousness, culture, and the end product, emergent complexity. Some of these are inductive scales that cannot be measured in numeric units. We might measure information, as bits for instance, but we cannot enumerate the ingenuity embedded in the code. We don’t have a consciousness meter that we can put on your head. And beyond the crude measure of energy-density-flow, we don’t have a scale for emergent complexity. It is a triumph in intellectual history that we have come to understand the scales of time, size, matter, and the varieties energetics. These are reliably real and profoundly practical insights about how our universe and our economy function.

All phenomena, all academic disciplines, and all economic activity can be located in reference to these hierarchical scales. It is this great matrix of bottom-up and top-down causality that allows complexity to grow.

Humans are not at the top of the scales of size and time, but somewhere in the middle. On the energetics, information-ingenuity, sentience-consciousness, and emergent complexity scales, however, humans are off the chart. The human niche is particularly favored in the matrix for the time being—each of us a nexus of causal relationships (physical, biological, social, economic, psychological, mental), realizing extraordinary flows of energy and ingenuity, intensities of subjective experience, and accelerating transformations in the modern period.

In our drive toward specialization and division of labors, we rarely reflect on these natural hierarchies and what they might mean for our understanding of science, self, and society.

“The ongoing fragmentation of knowledge and resulting chaos are not reflections of the real world but artifacts of scholarship,” writes Harvard biologists E.O. Wilson in his book, Consilience: The Unity of Knowledge.[14]

The fundamental problem underlying the disjointed curriculum is the fragmentation of knowledge itself. Higher education has atomized knowledge by dividing it into disciplines, subdisciplines, and sub-subdisciplines—breaking it up into smaller and smaller unconnected fragments of academic specialization, even as the world looks to colleges for help in integrating and synthesizing the exponential increases in information brought about by technological advances. The trend has serious ramifications. Understanding the nature of knowledge, its unity, its varieties, its limitations, and its uses and abuses is necessary for the success of democracy… We must reform higher education to reconstruct the unity and value of knowledge.[15]

This is not a problem isolated in the ivy towers of universities. It is an acute problem also for all of us, who have personbyte and firmbyte limits, but who also need to understand a world that is rapidly changing due to science, technology, and globalization.

The bio-social-physical you and me are never outside the matrix, but in this scientific and philosophical exercise we seem to stand away, looking down on the matrix from above. So far as we know, no other entity in the universe has achieved this capacity, and it is in this domain that humans are no longer middling creatures of the matrix. Our self-transcendence, realized especially through the progress in science and economics, art and culture, is a super and completely natural emergent phenomena. We come to understand the matrix from the inside out, though the matrix knows nothing of us. 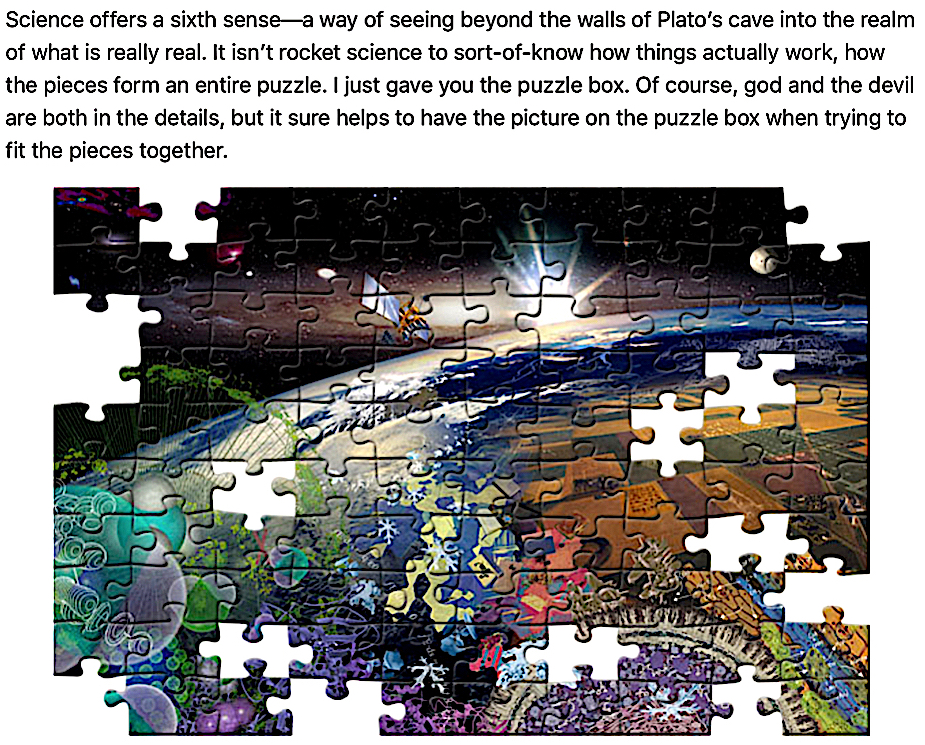