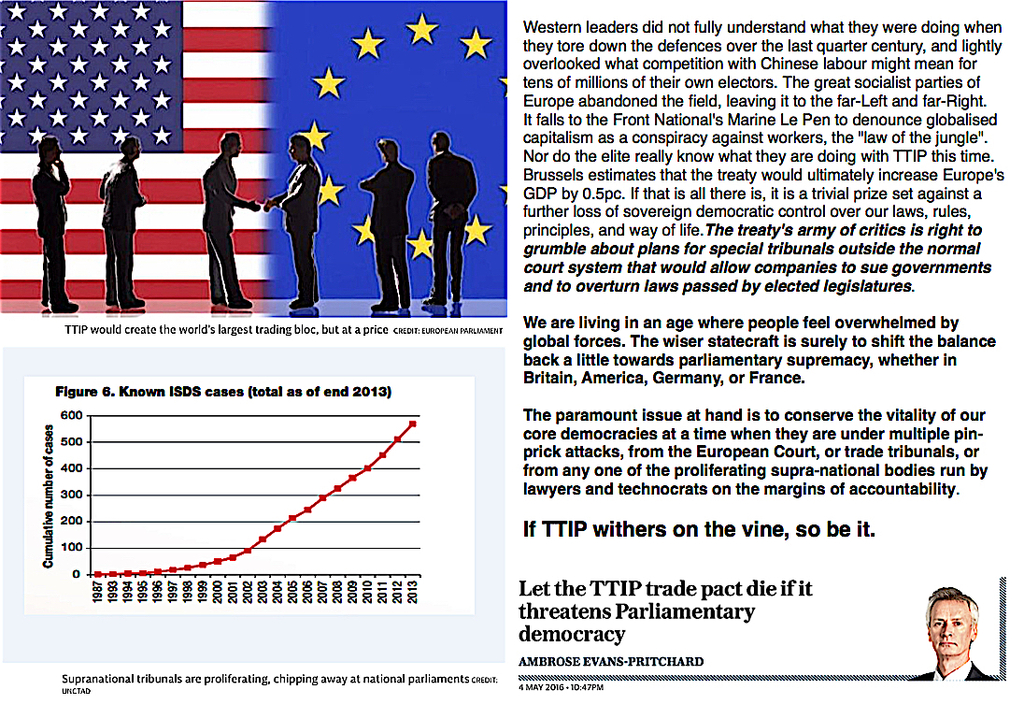 twixt the EU and the USA is dying a slow death.

to question the premises of free trade, but this tissue rejection of

the TTIP project in Europe may be a blessing in disguise.

You can push societies too far.

The European Commission's Spring forecast this week has an eye-opening

section on the rise of inequality. Without succumbing to the fallacy of

'post hoc, propter hoc', it is an inescapable fact that the pauperisation of

Europe's blue collar classes corresponds exactly with the advent of

globalisation. The report admits that "offshoring" by manufacturers may

have played a role, meaning of course that Western multinationals have

been able to play off workers at home against cheap labour in China,

emerging Asia, or Eastern Europe. This game is limited only by cost of

shipping goods, or by worries about the rule of law. It is why the profit

share of GDP has been rising relentlessly. The owners of capital have never

had it so good.

Yes, other factors are at work. A shift in technology has raised the premium

on skills. Reliance on QE instead of fiscal stimulus has inflated the price of

assets held largely by the rich. The eurozone's austerity regime has made

matters even worse, hitting the poor hardest. Even today the youth jobless

France.  The report shows that those with incomes below 40pc of the

This is not just a political failure: the inequality itself perpetuates the

depression, for the poor spend and the rich save, and the core problem in

the world economy is excess savings. The imbalances that led to the

globalisation, whether it has been unchecked capital flows or the rise of

China. Perhaps great shock of globalisation is a one-off effect, already past

economy off manic over-investment, or at least talks about doing so. But

right now China is still adding excess capacity across a swathe of industries,

matters to a head, either because President Xi Jinping devalues the yuan to

buy political time or because capital flight forces his hand. Either way we

would face a deflationary tsunami.