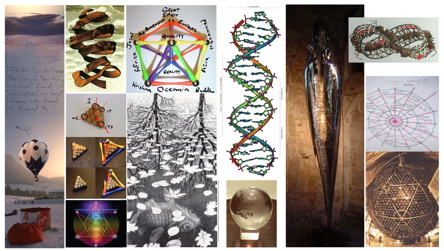 for every individual member of our species, begins the moment we leave

our mother’s womb and continues until we leave this “mortal coil”.

The coil is, of course, spiral shaped as IS the case with ALL the processes of LIFE and that stage of the journey has now arrived when - 'Crises & Crisis Management' IS itself in CRISIS - and as Albert has put into context  and stated elsewhere, IT IS necessary to proclaim a NEW AXIS AGE.

The old order solution design responsible for the in-balance and dis-harmony of our Eco-System will continue to perpetuate, until such time that the simple majority of surviving members of our species on earth have “transcended the MIND-SET switch” and opened their eyes to the “other side perspective” of our mobius-strip-like journey of existence.

Integral with the Planet

In order that Homo Sapiens should transform rather than continue to translate their old order solution design experiences, those that have already “transcended the switch” and already opened their eyes to the “other side perspective”, must cooperate and collaborate on the new order balanced eco-system solution design for a new order environment which will ensure the survival of LIFE on EARTH.

In no different way than zaadzsters_et_al@gaia have ... already demonstrated their potential to DO SO.

The other information revolution, IS now established as a result of an infrastructure which has become the machine which IS US and using US to potentially establish the most appropriate new order environment, based as it is on the gift
of the world wide web to the people, to provide a diverse multiplicity of stories of experience of cooperation and collaboration of the people, for the mutual benefit of the peoples.

As has always happened throughout history, however, those that control the infrastructure of our inter-network of networks want to make more profits from that infrastructure as a result of implementing their own translation of the old order model based on the infranet initiative. So be it. BUT this time around the very people who are about to start funding those increased profits, have the opportunity to establish from the outset, a promise from their masters that a proportion of the profits be directed to the new order environmentally sustainable future of their children and their children’s children, NOT just in line with the TAX SLAVE STATUS which the old order model requires of them.

Although Hillary Clinton has said that America cannot solve the world’s crises and that the world cannot solve its crises without America, WE the people must provide collective leadership BY the people, OF the people, FOR the people, as an example to  ALL of the LEADERS, which we now look upon to facilitate the solution designs of a NEW AXIS AGE. Arianna Huffington's “fourth instinct,” which she calls “the desire for transcendence,” that has driven political and social change throughout history ...

IS a manifestation of the desire on the part of the people 2 DO SO.

“the better angels of our nature.”

THE process by which this will happen must initiate the transformation

from a predominantly patriarchal OLD ORDER MIND-SET to a NEW

ORDER MIND-SET which will establish the NEW ORDER ENVIRONMENT

of mutual benefit to ALL souls on earth, which could truly exemplify a


views (309)
Tagged with: change, new axis age, lead the leadership by example, mind-set switch, transform, transformation, solution design, the machine is us and using us, zaadz

Andrew Cohen has asked in his latest EnlightenNext Editorial …

Who is an Evolutionary ?

Our level of consciousness—the sphere of our awareness and concern—has the capacity to be global, extending to all corners of the planet.

I posted often this year useful insights from Steve McIntosh:

First statement from his blog about upcoming meeting of evolutionaries

Question: How could this collective coming together of leaders be most instrumental in bringing public awareness to the great shift that is occurring?Answer:
First, we could demythologize the idea of “the great shift”,
recognizing that there is not just one shift, there are actually many
shifts in consciousness going on simultaneously in the world—a shift
from pre-traditional to traditional in Africa, a shift from traditional
to modern in Asia, and in America, and ongoing shift from modern to
postmodern, as well as the beginning of a shift from postmodern to
integral. We could also be more discerning about the nature and
behavior of cultural evolution, and recognize the fallaciousness of the
wishful thinking that expects that the world is going to “wake up” and
suddenly become “cultural creative” in a miraculous transformation.

Second one after the event:

Travels in CaliforniaTuesday, August 19, 2008 3:11 PM For the past few weeks I’ve been traveling in California in connection with my Integral Philosophy work. My trip
included an invitational event at Deepak Chopra’s center in Carlsbad, a
talk at the new Santa Monica Center for Integral Living, a talk in
Berkley at Bay Area Integral, and a variety of presentations at the
Integral Theory Conference at John F. Kennedy University. I finished
the trip with a weekend at Esalen on the Big Sur coast where I gave a
workshop on Integral Consciousness. This post includes brief comments
on the highlights.Evolutionary Leaders at the Chopra CenterThis event
was attended by some of progressive spiritual culture’s most prominent
thinkers and activists (named in my last blog post). As you can
imagine, it was difficult to accomplish concrete outcomes with forty
outspoken postmodernists in a room together, but we did agree to work
on a “declaration of conscious evolution” document, which is still
being circulated by email prior to finalization. For me, the best part
of the event was the personal connections I made with Jean Houston,
Marianne Williamson, Peter Russell, Bruce Lipton, and Deepak himself.
Although the integral perspective was well received, there was a
clearly discernable difference between the participants who were “exit
green” and those who remained embedded within the postmodern worldview.
I did make the point that the best way for progressive spiritual
culture to persuade modernists to adopt postmodern values and concerns
is for postmodernists themselves to “become the change” and demonstrate
their own evolution by adopting the integral worldview. I emphasized
how the often anti-modern sentiments of postmodernism represent a
hindrance to the important project of moving America’s center of
gravity forward in history. Overall, I think that there were good
integral seeds planted at this weekend event and I look forward to
working with this group into the future.

I C that you R having the same editing problems that I have experienced this morning. I have already advised Siona that this kind of “CHANGE”
IS hardly conducive to “continued motivation” to post blog comments in
support of the ONE SUPERMIND
which IS itself composed of the collective minds of our species ALL
divided by the various perspectives of the “GROUPS’ to which you refer
Albert …

but that SIMPLE MAJORITY requirement still needs a MIND-SET switch of the masses.

but that SIMPLE MAJORITY requirement still needs a MIND-SET switch of the masses.

At ILR and elsewhere this challenge is known.

I have engaged in Gaia and other spaces for three years nonstop to create nexus, momentum, speed and impact for real mainstream .

Thanks Michael for ongoing collaboration here!

All hail to Albert and his determination, perseverance and SPIRAL mastership.

THE SEASON’S GREETINGS and MERRY CHRISTMAS to YOU and YOURS Albert.