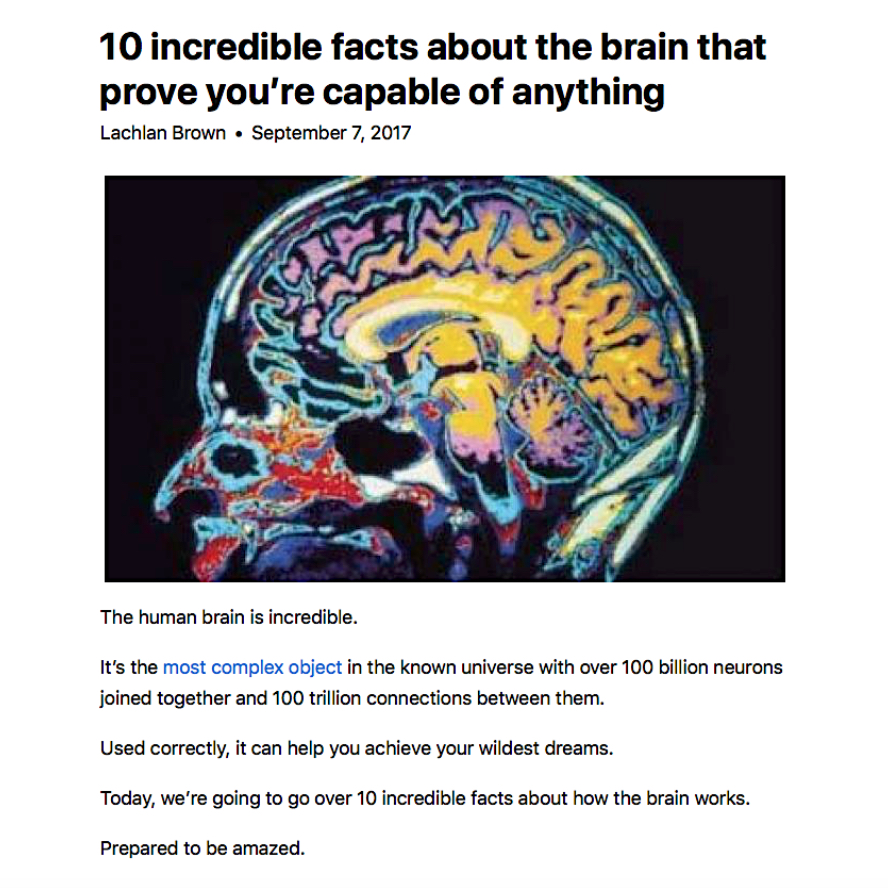 THE CENTRE of the human nervous system and IS a highly complex organ. [IT] has the same general structure as the brains of other mammals, but is over five times as large as the "average brain" of a mammal with the same body size. Most of the expansion comes from the cerebral cortex, a convoluted layer of neural tissue that covers the surface of the forebrain. Especially expanded are the frontal lobes, which are involved in executive functions such as self-control, planning, reasoning, and abstract thought. The portion of the brain devoted to vision is also greatly enlarged in humans.

Brain evolution, from the earliest shrewlike mammals through primates to hominids, is marked by a steady increase in encephalization, or the ratio of brain to body size. THE human brain has been estimated to contain 50100 billion neurons, of which about 10 billion are cortical pyramidal cells. • cells which pass signals to each other via around 100 trillion synaptic connections • such that [IT] IS hardwired not only to ask the questions about y[OUR] multiverse of parallel universes, but also TO KNOW THE ANSWERS.

In spite of the fact that it is protected by the thick bones of the skull, suspended in cerebrospinal fluid, and isolated from the bloodstream by the blood-brain barrier, the delicate nature of the human brain makes it susceptible to many types of damage and disease. The most common forms of physical damage are closed head injuries such as a blow to the head, a stroke, or poisoning by a wide variety of chemicals that can act as neurotoxins. Infection of the brain is rare because of the barriers that protect it, but is very serious when it occurs. More common are genetically based diseases[citation needed], such as Parkinson's disease, multiple sclerosis, and many others. A number of psychiatric conditions, such as schizophrenia and depression, are widely thought to be caused at least partially by brain dysfunctions, although the nature of the brain anomalies is not very well understood.

... NOW [IT] IS TIME for those 10 incredible facts - from Lachlan Brown

the editor-in-chief of Ideapod and also the founder of Hack Spirit.

1) For our brain, there’s no difference between reality and imagination

Did you know that the brain cannot tell a fact from fantasy? Yep, when you’re having a dream, it feels just as real as if you were doing it in real life.

When you believe a placebo medication will work, it does.

The brain cannot tell fact from fantasy and this gives us a huge opportunity to see the world however we want.

Some people literally do see the world with rose colored glasses.

You’d think that the brain would fatigue if you use it more, just like a muscle. But you’re wrong.

The real reason for the ‘feeling’ of brain fatigue occurs because of our emotions.

The truth is, the level of blood flowing through the brain remains unchanged, whether you’re working or not.

However, for someone who works outside using their muscles, the blood from the veins changes significantly.

Most thoughts you have today are what you had yesterday. The brain works automatically and almost behaves predictably.

This is why it can be difficult to change someone’s mindset. If you’re a natural pessimist, you literally have to consciously think positive thoughts for days on end to see any noticeable change.

4) We see what we’re thinking about

Your thoughts can turn into reality. This is called confirmation bias. If you have a dream about traveling to Paris, the next day you’ll see reminders of the dream you had.

If you consciously think about white horses, you’ll be more likely throughout the day to see things that remind you of white horses.

Perception really is reality. So put on those rose colored glasses!

Just like our muscles need training to become stronger, our mind is no different. Brain games such as tetris have been found to have benefits to the brain under some circumstances.

It helps us use our mind muscles to think differently and constructively.

Also, getting a good night’s sleep and exercise also provide considerable benefits to the brain.

Yep, even when we’re sleeping, our brain is still working. In fact, its activity is even higher when we sleep!

7) Shutting down from time to time is vital

While the brain is always active, it can still get drowned in thousands of negative thoughts. In order to give our immune system a rest, it’s essential to take time off and relax.

Rest and relaxation is incredibly useful for our stress levels and mindset.

Yep, to “save” new memories, our brains need to get rid of old ones. While we can’t always choose what to remember and what to forget, forgetting is useful for the brain to not be so drowned in useless information.

Making connections in the brain keeps it fresh and on fire.

9) Our brain is insensitive to pain

While the brain is essential in our body reacting to pain, the brain doesn’t actually feel it. It doesn’t have the necessary receptors. However, the nerves and tissues surrounding the brain does feel pain.

10) We can change our brain

The most liberating fact of all. Neuroscience has found that our brains are constantly changing, in a process called “neuroplasticity.”

Any kind of brain activity generates new connections in the brain.

If we constantly think that we’re not good enough to achieve a certain goal,

that thought will become stronger in the brain. Vice versa, if we think we are

good enough, that thought will become cemented in our brain overtime.

We all have the ability to achieve whatever we put our mind to.

We just have to believe it and work at it.