The COP 21 conference in Paris last year settled the

UN Paris Agreement, which thence became a hybrid of

a combination the Kyoto Protocol and the Copenhagen 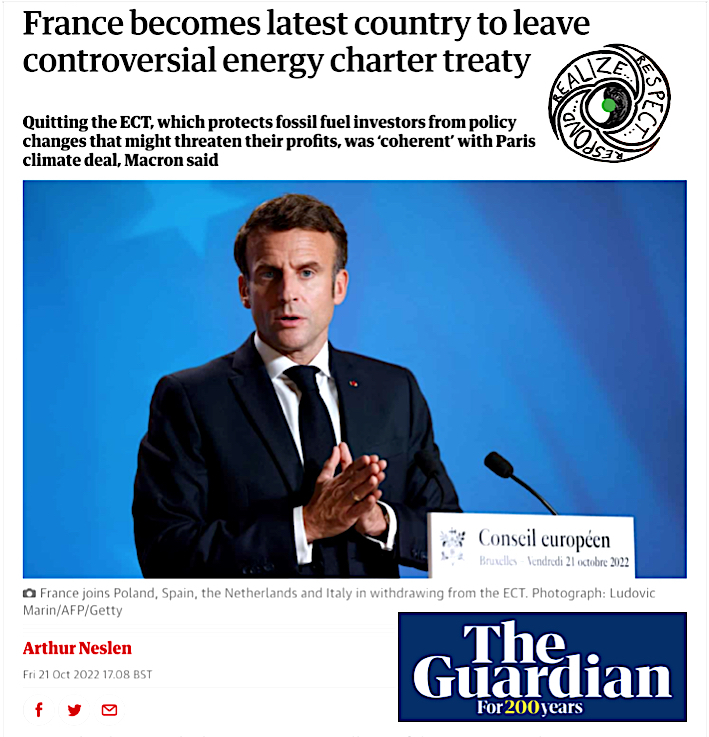 Speaking after an EU summit in Brussels on Friday, French president, Emmanuel Macron, said: “France has decided to withdraw from the energy charter treaty.” Quitting the ECT was “coherent” with the Paris climate deal, he added.

The French withdrawal will take about a year to be completed, and in that time, discussion in Paris will likely move on to ways of neutralising or reducing the duration of a “sunset clause” in the ECT that allows retrospective lawsuits. Progress on that issue is thought possible by sources close to ongoing legal negotiations on the issue.

The energy charter treaty was set up in 1994 to protect western energy firms working in former Soviet countries. It allows investors to sue governments which enact policies that could undermine their expected financial returns.

However, critics have estimated that the final cost in compensation to fossil fuel companies could rise to more than a trillion dollars. In August, the UK oil firm Rockhopper received a £210m award as compensation for an Italian offshore drilling ban.  Italy has also withdrawn from the treaty.