MANKIND [BE]ing DRIVEN to HELL in A HANDCART 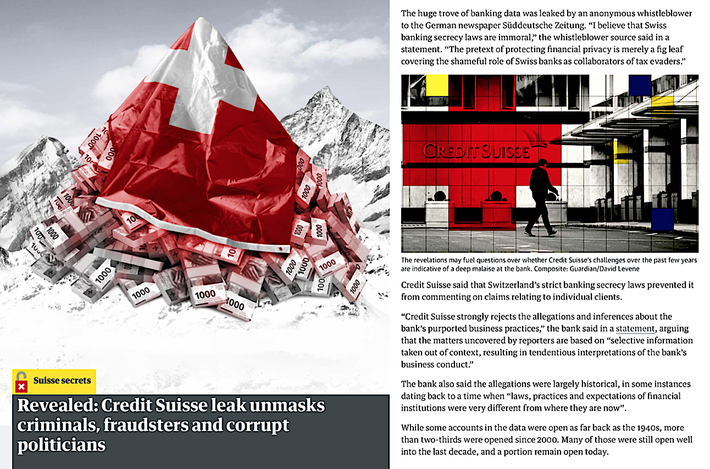 A massive leak from one of the world’s biggest private banks, Credit Suisse, has exposed the hidden wealth of clients involved in torture, drug trafficking, money laundering, corruption and other serious crimes.

Details of accounts linked to 30,000 Credit Suisse clients all over the world are contained in the leak, which unmasks the beneficiaries of more than 100bn Swiss francs (£80bn)* held in one of Switzerland’s best-known financial institutions. The leak points to widespread failures of due diligence by Credit Suisse, despite repeated pledges over decades to weed out dubious clients and illicit funds. The Guardian is part of a consortium of media outlets given exclusive access to the data. We can reveal how Credit Suisse repeatedly either opened or maintained bank accounts for a panoramic array of high-risk clients across the world. They include a human trafficker in the Philippines, a Hong Kong stock exchange boss jailed for bribery, a billionaire who ordered the murder of his Lebanese pop star girlfriend and executives who looted Venezuela’s state oil company, as well as corrupt politicians from Egypt to Ukraine.

One Vatican-owned account in the data was used to spend €350m (£290m) in an allegedly fraudulent investment in London property that is at the centre of an ongoing criminal trial of several defendants, including a cardinal. The huge trove of banking data was leaked by an anonymous whistleblower to the German newspaper Süddeutsche Zeitung. “I believe that Swiss banking secrecy laws are immoral,” the whistleblower source said in a statement. “The pretext of protecting financial privacy is merely a fig leaf covering the shameful role of Swiss banks as collaborators of tax evaders.”

ALL of which reminds me of the story, which detailed all of the facts relating to Imelda Romualdez Marcos & her husband, Ferdinand Marcos who stole billions from the Filipino people and then transferred most of it into gold bullion, that was stored in a Swiss Bank Vault, which following their transfer of the keys of sole access so to speak, to an individual who has since died, IS in[DEED] still not accounted for and maybe remains in that Swiss Bank Vault, along no doubt with a lot of other mis-appropriately gained or stolen produce !!!??? 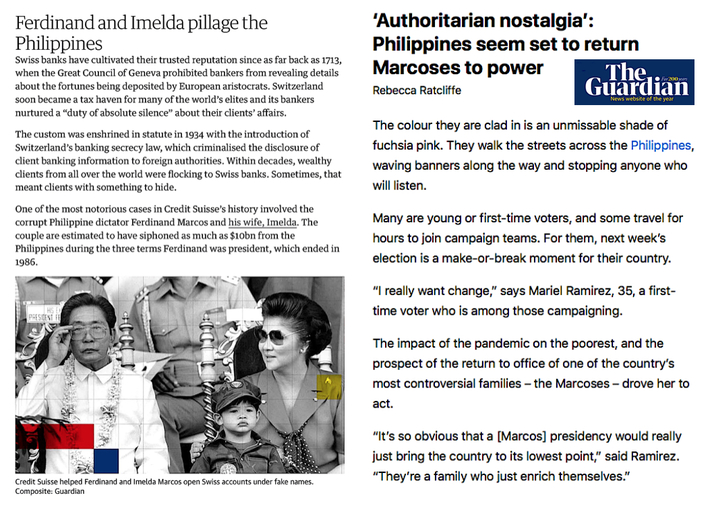 Ferdinand Marcos Jr, known as “Bongbong” or BBM and the son of the former dictator Ferdinand Marcos, is leading in opinion polls – despite his late father’s notorious history of corruption and rights abuses.

Leni Robredo and her army of nearly 2 million volunteers, known as Kakampinks (pink allies), are trying to stop Macros Jr.

Robredo, a human rights lawyer who has advocated for disadvantaged groups and is the current vice-president, is trailing second in the polls by a significant margin. In an election where online misinformation is rife, her supporters have launched a door-to-door effort that is unusual in its scale.

Rebecca Ratcliffe and Lorna Bayani in Manila - The Guardian