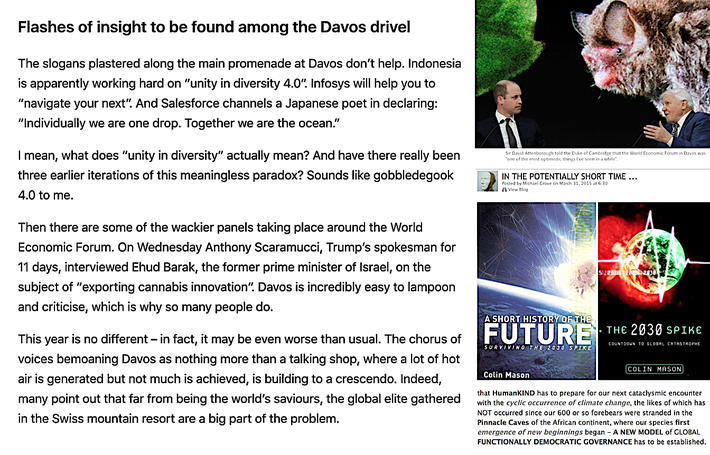 On Tuesday, the veteran broadcaster Sir David Attenborough, who was

being interviewed by the Duke of Cambridge on the main stage at Davos,

“This event is one of the most optimistic things I’ve seen in a while.”

it's outset, has ever addressed in any sustainable way the issues raised

so long ago by Colin Mason in his two books, or acknowledged in any

Axiom 1 - Useful change is likely to come only if it can provide as,

equal, obvious and general a benefit as possible.


DESPITE the fact that Sir David Attenborough said that the environmental

had to conquer the natural world and live in opposition to it. The truth,

he said, is the opposite. “Events like this show that fundamental, beautiful

fact is being realised. [The World Economic Forum] arguably has more

power than any other gathering. They recognise that fundamental truth

and can do something about it.”


Some hope however, THAT THE WEF WILL EVER ACT

on that fundamental truth and do anything about [IT]

in THE TIME that ME•WE have left to in[DEED] DO SO.