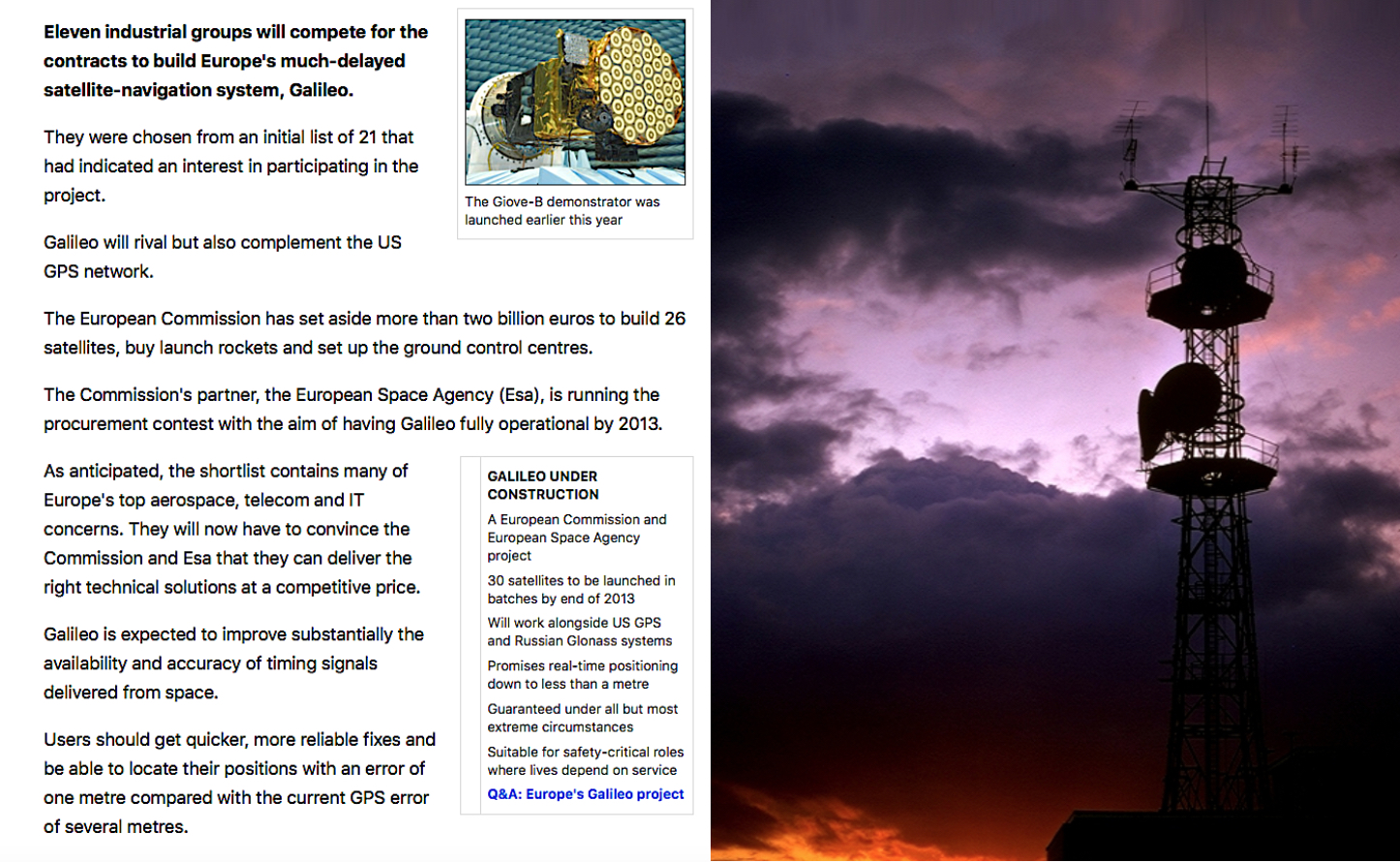 ... BUT the project has been hit by delays and cost overruns. The original procurement plan involving a partnership between the public and private sectors collapsed; and the Commission was forced to start again, turning Galileo into an initiative that will be wholly financed from the public purse. Nonetheless, many of the companies that were included in the original partnership are present in the shortlist of competing groups now hoping to win construction contracts.

The 11 pre-selected candidates are:

System Support (to bring all the elements of the project together): ThalesAleniaSpace (Italy); Logica (The Netherlands)

Launch Services (the rockets that will loft the network): Arianespace (France)

Some work on Galileo is already under way - four operational satellites and some ground control systems are in the process of being built. The "six work packages" now open to competition have strict rules governing how much work can go to each company and how much of that work must then be sub-contracted to partners.

This means a lot of the work will be spread around Europe; and if work segments are split to ensure speed, the spread could be wider still. This is quite likely to happen for the preparation of the satellites, for example.

In any event, it looks now as though the spacecraft will be a team effort between Germany and the UK, with the satellite payloads (their electronic brains) being prepared in Britain and the chassis construction and final integration being done in Germany.

This comes about through any division of the space segment - because Astrium Germany will use UK colleagues on the payload; and OHB will use its UK partner, SSTL in Guildford, for the same job.

"This is really great for UK industry," said Phil Davies from SSTL.
"It gives us a key role far into the future."

Timescales are tight. The first four constellation spacecraft are expected to be launched in 2010, with the remaining 26 put in orbit by the end of 2013.

In April this year, a test satellite dubbed Giove-B
was launched from Baikonur in Kazakhstan.

Giove-B contains key technologies - such as atomic clocks - which will eventually be built into the 30 operational platforms that form the Galileo network.

Europe has already spent 1.6bn euros ($2.5bn; £1.3bn) on the project and ministers and the European Parliament have warned that the additional 3.4bn euros ($5.3bn; £2.7bn) recently approved for all sat-nav investments will be the limit on expenditure. The competition, formerly known as the Galileo Masters, is run in a number of mostly European regions, and this year included Taiwan and Australia.

As well as winning the overall competition, garnering the title of Galileo Master, Sci-Tech's idea won the UK's national competition, called the UK SatNav Challenge, which is run by the Hertfordshire Business Incubation Centre (HBIC).

The Galileo Master prize includes 20,000 euros in cash and six months' business "incubation" at HBIC under the auspices of the GSA, the European regulatory agency for the new sat-nav technology.

It also won a new prize offered by the GSA for the most promising idea that will utilise the globally integrated sat-nav services provided by Galileo, GPS, and the Russian GLONASS system - a prize that allows a further 12 months of business incubation anywhere in Europe.

Sci-Tech's idea was born at a meeting of tech-minded yachtsmen in a bar, Sci-Tech co-director Peter Hall says, who wondered why a sat-nav-enabled system for people lost at sea wasn't on the market.

"There are a number of devices on the market that use RFID to say that someone has gone out of range - you know that they're there, and when they're not there you assume they've gone over the side," Mr Hall told the BBC.

"But none of them track where the person is in the water. You know where they were, but if you're in a strong-running tide they're not going to be there when you go back, they'll be somewhere else," he added.

Sci-Tech's approach is to use a device attached to a lifejacket that, when wet, taps into Galileo or other global satellite positioning networks. Upon acquiring a location, the coordinates are sent by radio broadcast to the boat or rescue vessels.

With the position of the person in the water, Mr Hall says, the on-board part of the system can guide the vessel back to the person by feeding data into existing, commercial maritime navigation systems.