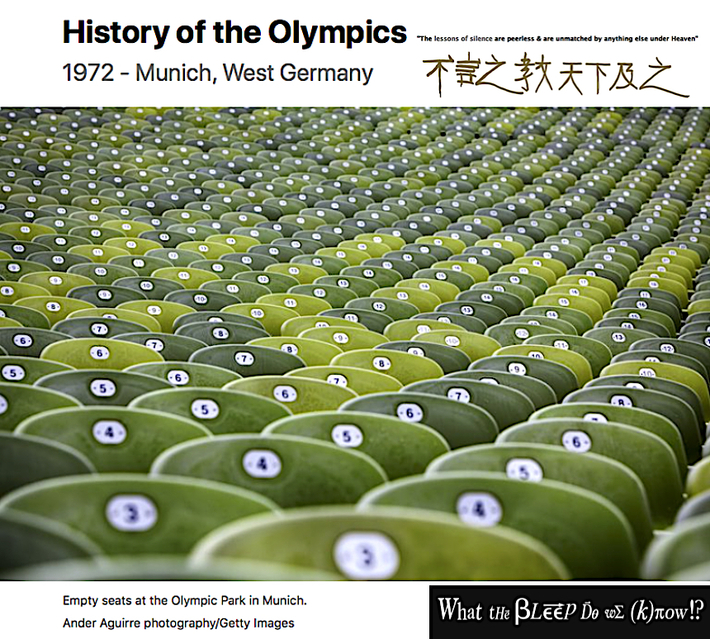 The 1972 Olympic Games will probably be best remembered for the murder of eleven Israeli Olympians.

On September 5, a day before the Games were to begin, eight Palestinian terrorists entered the Olympic Village and seized eleven members of the Israeli Olympic team. Two of the hostages were able to wound two of their captors before they were killed. The terrorists requested the release of 234 Palestinians that were being held in Israel. During a failed attempt at rescue, all of the remaining hostages and five of the terrorists were killed, and three terrorists were wounded.

The IOC decided that the Games should go on.

The following day there was a memorial service for the victims and the Olympic flags were flown at half staff. The opening of the Olympics was postponed one day. The decision of the IOC to continue the Games after such a horrific event was controversial.

THE LESSONS of SILENCE are in[DEED] PEERLESS

but what a taradiddle  [IT] transpired to be.

My soulmate Linnie & I were living in Sittard NL at the time, and all of this became a solemn reminder for her having actually watched Bob Beamon break the long jump distance record four years before, live on a Black & White TV that her dad had built for her to watch the olympics, whilst living in our first home together in High Wycombe. 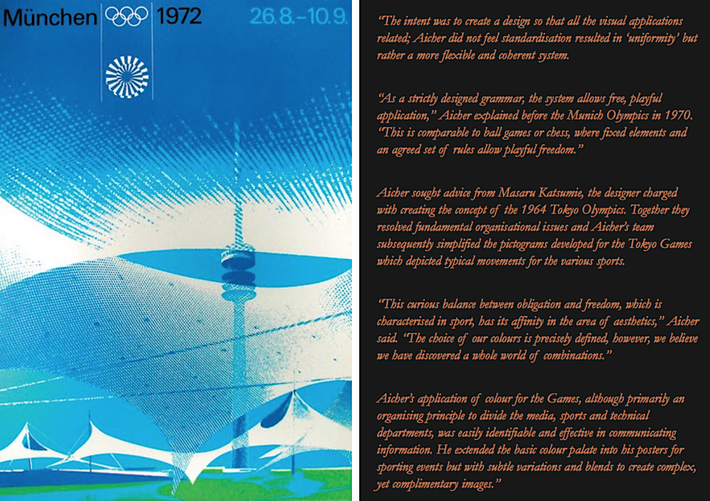 Otl Aicher served as chief graphic designer for the 1972 Munich Oly.... Faced with the task of creating thousands unique collateral pieces meant to to promote a variety of different events range of languages, Aicher and his team solved this problem by using a uniform color palette and a flexible grid capable of allowing the creation of different work, while maintaining a close family resemblance. They created a unique photo illustration process involving complex layering of color separations, which look surprisingly fresh 40 years later; though, at the time all of this work was done manually with mechanicals and over-lays as opposed to the photoshop we would use today. They were then printed using an average of 6, but as many as 12 spot colors in each piece including a special metallic silver. (This color palette was applied to everything from uniforms to buildings to vehicles and even dishes.)The type was set in Univers, which was consistently applied throughout.