Marcia Campos Muñoz phoned her father, brother, and oldest son, who rushed to the house. On the terrace, they found a grapefruit-size hole in the corrugated zinc roof and a smashed-up plastic table, last used for the quinceañera of Campos Muñoz’s daughter. The culprit was scattered on the floor, in pieces as black as coal. She picked up the biggest fragment, still warm to the touch. Already, her phone was chiming with WhatsApp messages from friends telling of blazing fireballs and rocks raining down on farms and fields. The family added its own viral messages to the mix: photos of Campos Muñoz and her son holding the big stone that crashed through her roof. Within hours, a local journalist visited the house and streamed videos of the damage on Facebook Live. [IT] was only the beginning. A space rock the size of a washing machine had broken up in the skies over the village, and the excitement was about to spread globally.

From the beginning, the inky Aguas Zarcas resembled a legendary carbonaceous chondrite that exploded in 1969 over Murchison, an Australian cattle town. Geology students helped collect about 100 kilograms of Murchison, and a local postmaster mailed pieces of it to labs across the world. To date, scientists have recognized nearly 100 different amino acids in it, many used by organisms on Earth and many others rare or nonexistent in known life. Hundreds more amino acids have been inferred but not yet identified.

Murchison also contained nucleobases, the building blocks of genetic molecules such as RNA, and in November 2019, researchers found a major component of RNA’s backbone: the sugar molecule ribose. This half-century parade of discoveries jump-started the now-flourishing field of astrobiology. “We’re not detecting life itself, but the components are all there,” says Daniel Glavin, an astrobiologist at NASA’s Goddard Space Flight Center. “I wouldn’t have a job without Murchison.”

The 30 kilograms of primordial leftovers from Aguas Zarcas hold similar promise. But these new pieces are 50 years fresher than Murchison, allowing scientists to apply modern techniques to preserve and probe what amounts to fragile lumps of unspeakably old clay. They could sniff out delicate organic compounds long evaporated from Murchison. They could hunt not just for amino acids and sugars, but also proteins, which have long been suspected but never confirmed in a meteorite. And if they were clean and careful, they could hedge against a perennial criticism of the Murchison finds by ensuring the molecules discovered inside were native, and not contamination from Earth’s own microbes. 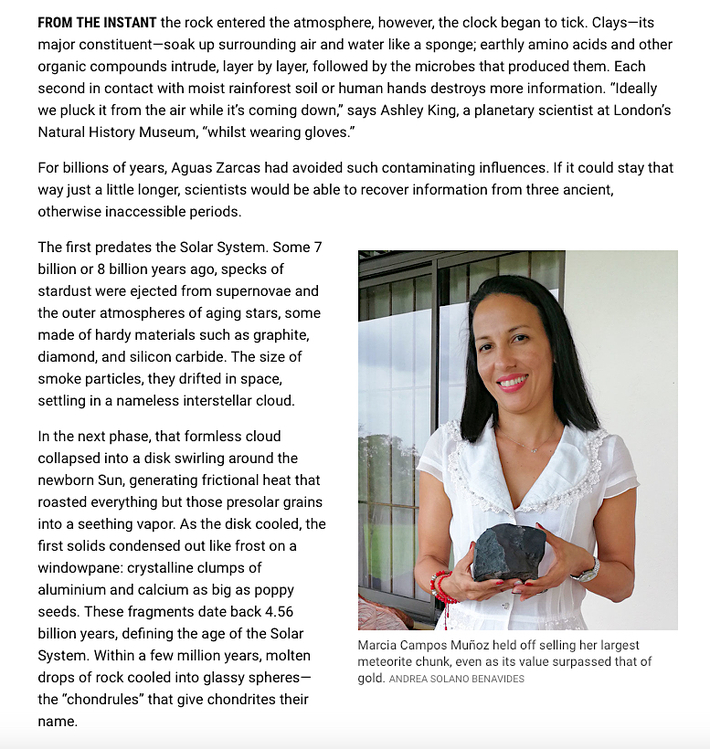 Then, in the third phase, these small particles started to stick together into boulders, among them the hodgepodge of rocks that would become Aguas Zarcas. Planets began to sweep them up, but the future meteorite avoided that fate, remaining part of a small asteroid in the cold void beyond Jupiter. In that early home, it avoided being melted by the Sun or in the hot interior of a planet.

Instead the asteroid grew modestly, amassing specks of ice and carbon, the latter already morphing as sunlight drove chemical reactions. In its interior, the presolar stardust, the first solid minerals, the glassy spheres, and the carbon compounds all crowded together. Heat from the radioactive aluminum melted the ices. Liquid water gushed out, kicking off another wave of chemistry that would go on for a few million years more. Simple compounds such as hydrogen cyanide and ammonia dissolved and were transformed into amino acids and other complex forms.

Many carbonaceous chondrites crashed into early Earth, perhaps delivering not just a sprinkling of organics, but also a portion of the planet’s inventory of water. Aguas Zarcas itself endured several billion more years of solitude, save for occasional smashups with other wayward space rocks. Based on its fiery trajectory through Earth’s atmosphere, caught on dashcams and volcano-monitoring cameras, researchers believe the unknown body ended up in the asteroid belt between Mars and Jupiter. Then one last collision splintered off a chunk, which spiraled in toward Earth, nearing the rotating globe just as Costa Rica spun into view on 23 April 2019.

Surviving its passage through the atmosphere was one test, but now another threat loomed: the country’s formidable rainy season, which could erode and contaminate much of that preserved history. The most important meteorite in half a century had landed on one of the last dry nights of the year. Nobody knew it then, but the first hard rain was 5 days away.