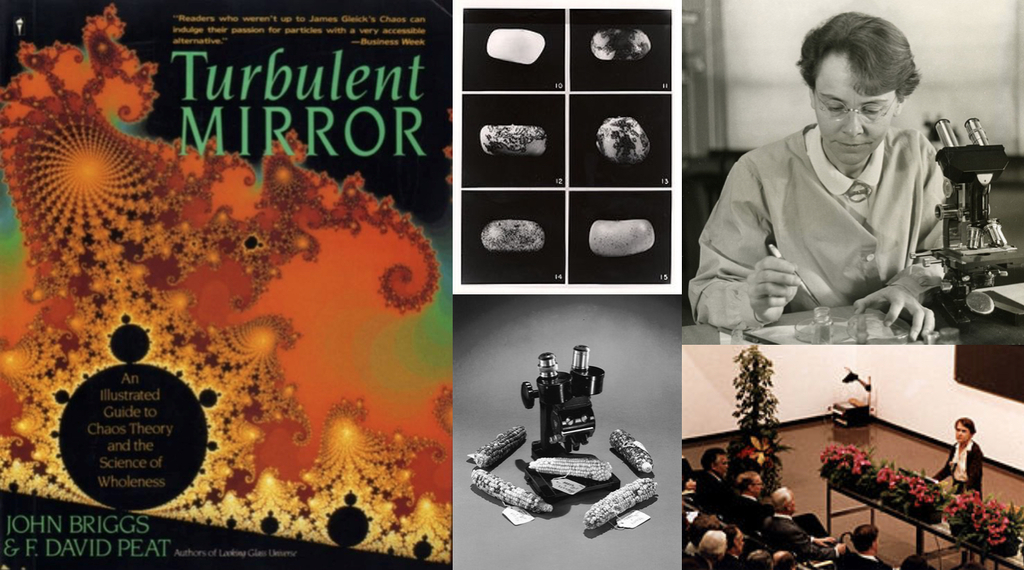 "creative possibilities" appear to signal a newfound awareness by

humanity of its own limitations, of its inability ever to grasp or

comprehend the truths of the universe. NOT SO. It is not humility

that animates the new cosmological jargon but bravado. When we

take a closer look, the new vocabulary suddenly takes on an entirely

new appearance, at once menacing and intoxicating. Perspectives,

ALL hail to THE SOUL of Jeremy Rifkin

architect, a designer. Humanity is abandoning the idea that the

universe operates by ironclad truths because it no longer feels the

need to be constrained by such fetters. Nature is being made anew,

this time by human being.

In that very same foreword John Briggs and David Peat pose the question ...

towards her work? "Basically," McClintock says, "every thing is one. There

is no way you draw a line between things. What we [normally] do is to

make these subdivisions, but they're NOT REAL." Though McClintock

chromosome) with an almost reductionist fervour, her approach is NOT

reductionist or "objective" in the traditional sense. "I found that the more

I worked with them the bigger and bigger [the chromosomes] got, and

when I was really working with them I wasn't outside, I was down

Yellow Emperor, McClintock's attitude is ironic: Both reductionist and

holist, she strives to get to the bottom of things which she is aware have

no bottom. In her sense of the whole, which she calls "a feeling for the

organism", she revels in the uncertainties - interrelationships, and

mutual dependencies that pervade nature. Her biographer describes her

"access to the profound connectivity of all biological forms - of the

cell, of the organism, of the ecosystem. The flip side of the coin is her

conviction that, without awareness of the oneness of things, science

can only give us nature in pieces; more often it gives us only pieces

of nature. In McClintock's view, too restricted a reliance on scientific

methodology invariably leads us into difficulty. 'We've been spoiling the

environment just dreadfully and thinking we were fine, because we were

using the techniques of science. Then it turns into technology, and it's

slapping us back because we didn't think it through. We were making

assumptions we had no right to make. From the point of view of how

the whole thing actually worked, we know how part of it worked ...

All these other things were happening and we didn't see it.' "

McClintock has evidently entered the turbulent mirror into a universe that is vaster, more complex, more fluid, less secure, and in a sense, more frightening than the one that has been portrayed by reductionist science. But in another sense, she seems to know that the turbulent universe is none of these things; it's a friendly place because we are all in it together.

During the 1940s and 1950s, McClintock discovered transposition and used it

to demonstrate that genes are responsible for turning physical characteristics

on and off. She developed theories to explain the suppression and expression of

genetic information from one generation of maize plants to the next. Due to

skepticism of her research and its implications, she stopped publishing her

Barbara McClintock discovered the first TEs in maize, Zea mays, at the Cold Spring Harbor Laboratory. McClintock was experimenting with maize plants that had broken chromosomes.

In the winter of 1944–1945 McClintock planted corn kernels that were self-pollinated, meaning that the flowers were pollinated by the silk of their own plant. These kernels came from a long line of plants that had been self-pollinated, causing broken arms on the end of their ninthchromosome. As the maize plants began to grow, McClintock noted unusual colour patterns on the leaves. For example, one leaf had two albino patches of almost identical size, located side by side on the leaf. McClintock hypothesized that during cell division certain cells lost genetic material, while others gained what they had lost. However, when comparing the chromosomes of the current generation of plants and their parent generation, she found certain parts of the chromosomes had switched positions on the chromosome.

She disproved the popular genetic theory of the time that genes were fixed in their position on a chromosome. McClintock found that genes could not only move, but they could also be turned on or off due to certain environmental conditions or during different stages of cell development. McClintock also showed that gene mutations could be reversed. McClintock presented her report on her findings in 1951, and published an article on her discoveries in Genetics in November 1953 entitled, ″Induction of Instability at Selected Loci in Maize.″

Her work would be largely dismissed and ignored until the late 1960s-1970s when it would be rediscovered after TEs were found in bacteria. She was awarded a Nobel Prize in Medicine or Physiology in 1983 for her discovery of TEs, more than thirty years after her research and initial discovery.

TEs are more common than usually thought. Approximately 90% of

maize genome is made up of TEs, and 50% in the human genome.

The fact that roughly half of the human genome is made up of TEs, with a significant portion of them being L1 and Alu retrotransposons, raises an important question: What do all these jumping genes do, besides jump? Much of what a transposon does depends on where it lands. Landing inside a gene can result in a mutation, as was discovered when insertions of L1 into the factor VIII gene caused hemophilia (Kazazian et al., 1988). Similarly, a few years later, researchers found L1 in the APC genes in colon cancer cells but not in the APC genes in healthy cells in the same individuals. This confirms that L1 transposes in somatic cells in mammals, and that this element might play a causal role in disease development (Miki et al., 1992).

Interestingly, an episode of the very latest series of Through the Wormhole, entitled Are Aliens Inside Us? suggests that ... Odds are pretty good that extraterrestrial life exists; new research shows we should look closer to home, possibly inside our bodies - which of course refers to the very latest scientific findings in support of Barbara McClintock's theories.