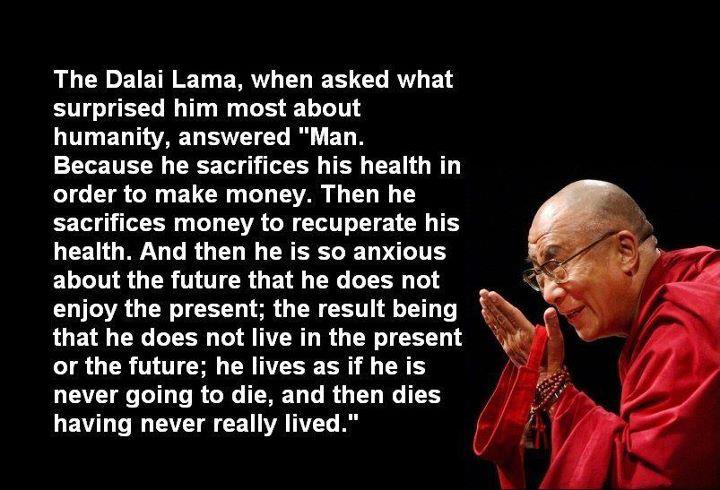 The key to a happy world is thinking of well-being at the global level.

well-being of others. He continues that when we think of well-being, we must think

of it as the well-being of the whole of humanity.

This video captures the essence of the Dalai Lama’s message: we are all the same

human being. Spoken by the Dalai Lama and presented by a diverse group of

36 Australians, the video shows that that we are mentally, emotionally and physically

the same, all 7 billion of us.

What does it mean to be human? That was the theme of San Francisco’s

aptly named “Being Human” conference, held at the Palace of Fine Arts the

last weekend in March. Convened by the Baumann Foundation, whose

mission is to foster greater clarity about the human condition through

dialogue between contemplatives and scientists, the conference was also

influenced by the California Institute of Integral Studies (the country’s

(a research institute investigating the human mind through both science

and contemplation). For those who are interested in the deeper dimensions

of the human experiment and curious what the expansion of scientific

knowledge tells us about how we might help move human culture forward,

Being Human was definitely the place to be in late March.

The New Frontier of Being Human

"This says to us that OUR world is geographically one. Now, we are faced with making

it spiritually one. Through our scientific genius we have made of the world a neighbourhood;

now through moral and spiritual genius, we must make it a brotherhood."