to drag someone into a cave, and show them something

unspeakable. Plenty of caves would do, but let’s take you

to the Cueva de la Pileta in Andalucia, Spain. There, we’ll

push you into one of its huge, damp, cool cathedral-halls

of fractured rock, where the darkness and the vastness of

empty space seem to press themselves tightly against your

skin, close and clawed and ancient.

We know that there were people here, some 20,000 years

ago. They left their millstones and their axe-heads; they

left walls blackened with soot from fires that went out eons

ago, leaving traces across a chasm of time that could

swallow up the entirety of recorded history four times

over. They left the bodies of their dead. And they left

marks on the walls. The people who lived in this cave

for us to even imagine, are still trying to talk to us.

Most people are aware of the fantastic animal paintings

that our stone age ancestors made - the herds of flowing

bison, the horses that rear up in shimmering patterns

across slabs of solid rock, the creatures overlapping each

other in fluid cacophonies without ground lines or settings

until they look less like representations of objects within

our world and more like the snorting stinking chaos of the

infinite. The Cueva de la Pileta has plenty of these; it’s

noted for its masterly depiction of a large, snub-nosed,

angry-looking fish. But I want to draw attention to

something else. Surrounding the fish, overlapping it at

points, are patterns. These patterns, and ones like them,

recur across the cave, and they’re echoed in other caves

across Europe and across the world. Lines, curves, hashes,

extended tooth, branching combs that can start to look

in the dark somewhere between abstraction and image.

Sam Kiss - What the caves are trying to tell US THIS [IS] a photograph of the entrance that my family

and I were faced with during the early 1980s and we

then had to ring a bell-push and await the caves

"guardian" to come and let us in for our visit.

This video provides a very modern updated tour of La Cueva and conveys much more than that which we were not able to see during the very magic of our own visit, in the early 1980s. So having watched it we can only be amazed by the art and carvings which have since been revealed and the ease of access which has now been created, such that very real timely comparisons can be made with such finds in France.

This recent 3D model of La Cueva de la Pileta provides an insightful perspective of and into the extensive workings of this cave. 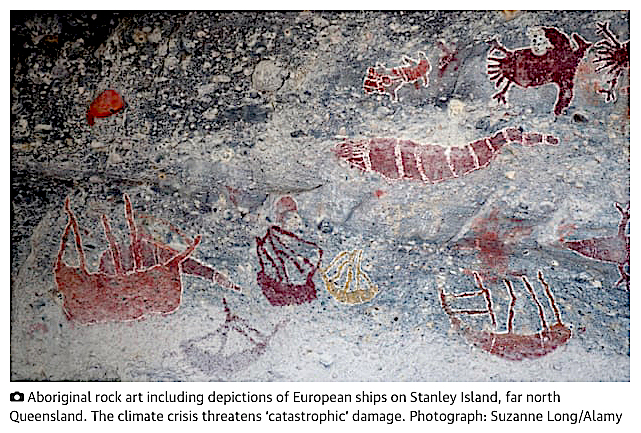 [IN] juxtaposition to the cave art here in Spain, all those years ago, here we are today in contemplation of the fact that Global Heating is [NOW] destroying rock art tens of thousands of years old, on the other side of Planet Earth. 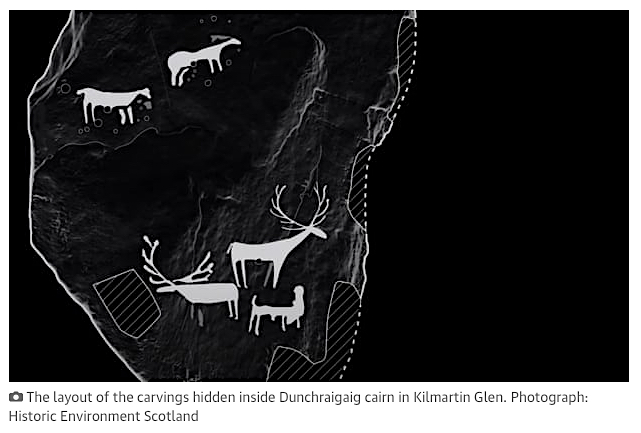 Nearer to home however • in an area of the British Isles where I spent a year or more of my Air Traffic Control training • Delicate prehistoric carvings of adult red deer, thought to be the oldest of their type in the UK, have been found in a tomb in one     of Scotland’s most famous neolithic sites.

The carvings, which depict two male red deer with full-grown antlers and several thought to be young deer, were discovered by chance in Kilmartin Glen in Argyll, home to one of the UK’s richest accumulations of neolithic and bronze age sites. 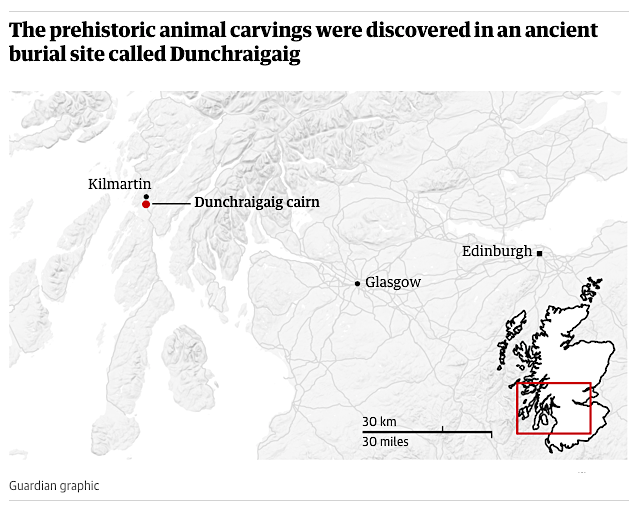 Archaeologists estimate the carvings are between 4,000 and 5,000 years old, a period which spans the neolithic and early bronze age, and are the first in the UK located alongside prehistoric cup and ring markings found throughout Kilmartin Glen.