WITHIN THE LAKE EYRE BASIN... 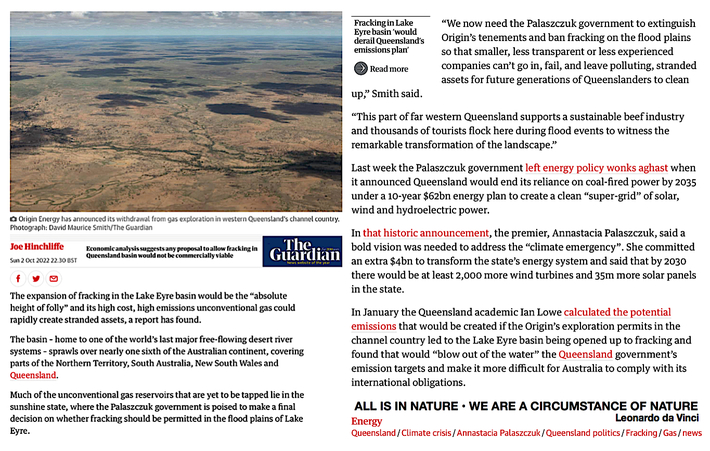 ... The Cooper basin is already home to a mature conventional gas industry and is considered highly prospective for unconventional gas, leading some fossil fuel companies to explore the possibility of fracking those reservoirs.

But economic analysis by Pegasus Economics’ Alistair Davey, released on Monday, contends carbon dioxide content from unconventional gas in the Cooper Basin averages about 30%, putting it at “a distinct competitive disadvantage” compared with other gas fields with much lower CO2 content of raw gas.

“Any requirement to offset emissions from the production of unconventional gas from the Cooper basin in the Lake Eyre basin will further erode its competitiveness given the high CO2 content of raw gas,” Davey states.

“Rather than pose the risk of becoming stranded assets, the commercial production of unconventional gas from the Lake Eyre Basin would be the absolute height of folly if it were ever to be commenced.”

Lock the Gate, which commissioned the independent analysis, said that aside from the social and environmental reasons to protect the Lake Eyre basin’s fragile flood plains, the report showed it was not commercially viable, making it “economically foolish to sacrifice” the basin to the fracking industry.

A spokesperson, Ellie Smith, said Origin Energy had probably arrived at similar conclusions when the company announced it was withdrawing from gas exploration in western Queensland’s channel country. She called on the Queensland government to prevent those permits being acquired by other companies.