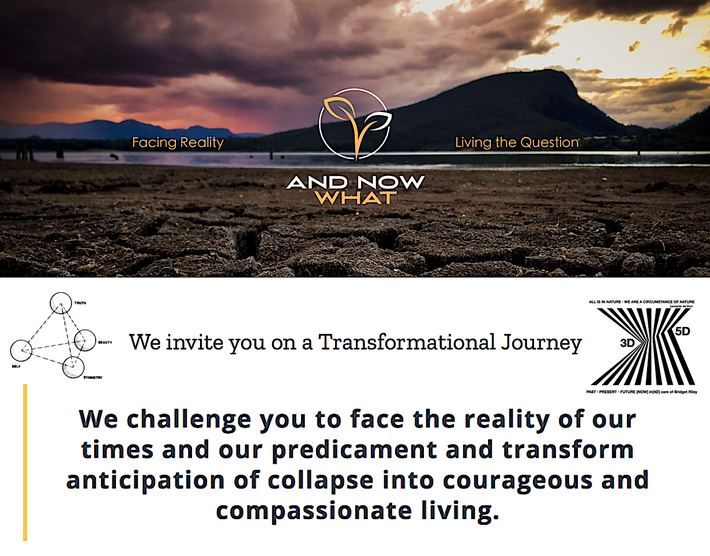 You will be challenged to face a reality so shocking
you might have difficulty accepting it.

While no one can predict exactly what the future will bring, we do know what time it is on the clock of the world: human systems are in global ecological overshoot and global climate disruption is locked-in. As a result the ecosystems we depend on for life and our complex human civilization are approaching imminent collapse. There are many signs this will not just happen to others, far-away, in some distant future, but that we are likely to experience it ourselves, in our lifetimes, at home, wherever we live.

Yes, this is heavy; and we make no apology – there is no gentle or easy way to say this! Collapse will bring massive suffering and death; it will mean the extinction of many forms of complex life on Earth – potentially including humans.

I would extend my most grateful thanks to Neil Davidson
for his comment here 2 FB, in which he drew attention to this most splendid initiative, in his comment that ...

The developed nations are locked to growth. They know collapse is coming; some even know collapse is here. Even Macron has spoken of 'the end of abundance'; yet none can act, especially alone. They are incapable of acting without losing political support (dumbed-down electorates, even in so-called 'educated democracies') and growth-oriented fascist and communist dictators in the rest. Too corrupt and in bed with corporations (limited corporate tax/ limited resource rent taxes etc) in virtually ALL governments, and where they do have a Sovereign Wealth Fund (Norway for example) they're still dependent on oil wealth and the vagaries of a complacent electorate... We are in collapse ... and need to start acting in accordance with reality.