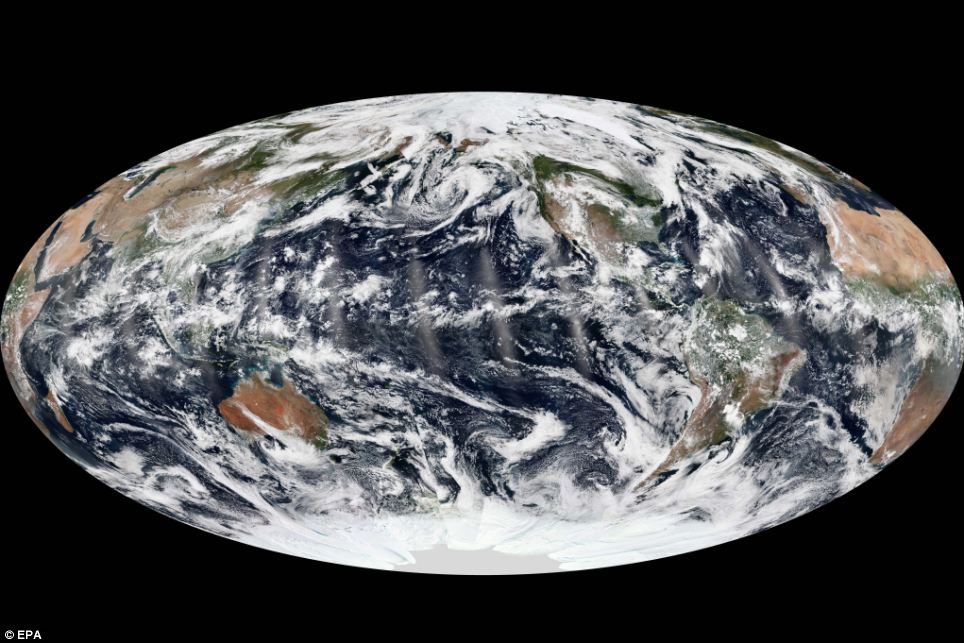 This image taken on September 8 - shows no hurricanes, cyclones, or

tropical storms in the Atlantic, Pacific, or Indian Ocean basin. A total of

14 polar satellite images, also known as swaths, were taken at midday and

stitched together to create the stunning view.

There was plenty of cloud cover, however, and smaller storm systems in view.

In the eastern Pacific, remnants of tropical storm Lorena were breaking up near

the Baja Peninsula.  In the eastern Atlantic, the pieces of a tropical depression

are seen starting to gather near the islands of Cape Verde.

By the next day, tropical storm Humberto would form.

The natural-colour images were acquired by the Visible Infrared Imaging

This, however, was an extremely rare day of calm on Earth.

charted the 11,967 tropical cyclones that have occurred on Earth since

records began. By colouring how many times any storm track overlapped

another, certain patterns arise in the density of storms affecting a given

area. Cyclone tracks overlapped the most in the western Pacific and Bay

The frequency of track overlaps is much lower in the Western Hemisphere. 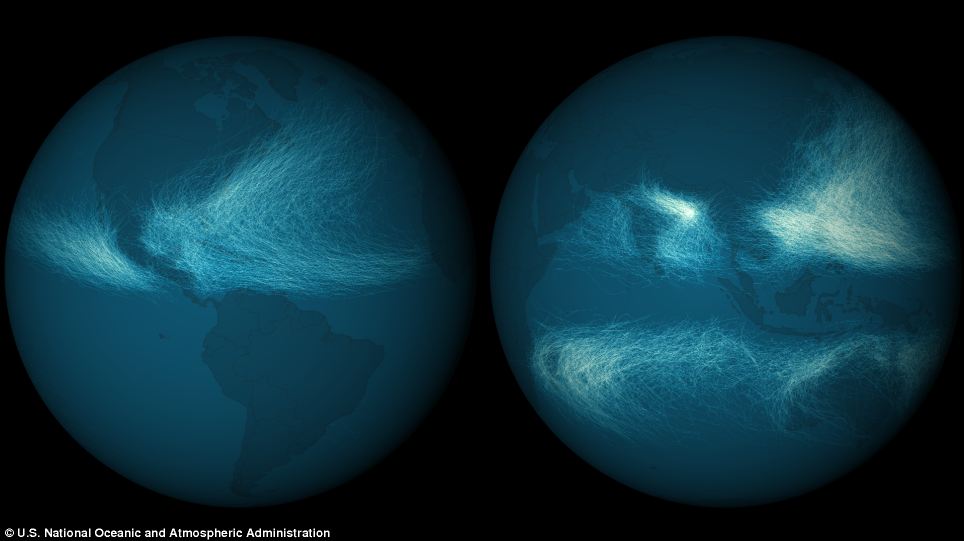 a second map showing storm intensity. In contrast to the first image of

frequency, the Northwestern Atlantic showed a much greater spread of

strong storms, whereas in the Pacific the strongest cyclones seem to group

In its May and August 2013 outlooks, the National Hurricane Center

forecasted a 70 per cent chance of a 'more active than normal' season,

Rising sea levels are already wreaking havoc on coastal communities, making them a target for

increased storm surges and coastal flooding. The most recent example of this trend is the tragic

toll of  Typhoon Haiyan in the Philippines, possibly the most powerful storm ever recorded.

5 out of 5 ***** for NOVA which continually delivers quality educational programming.

which he obtained through Amazon.com. He then made the following comment ...

NO this is not a copy cat of BBC's Planet Earth. This is a scientific program from years of

collecting data from satellites and researchers put their findings all together. You'd be amazed

how much detective work goes into it, such as how 1/5 of the planet's oxygen is seemingly

trapped in the Amazon forest, but travels out via method of rich sentiments dumped into the

ocean and then allowing plankton to regenerate the o2. Just watched 2 hours of this on PBS,

and thinking, if every nookie of earth still remains to be discovered, man's thirst and quest for

knowledge just never ends. You can view this program on PBS website before deciding if to buy.