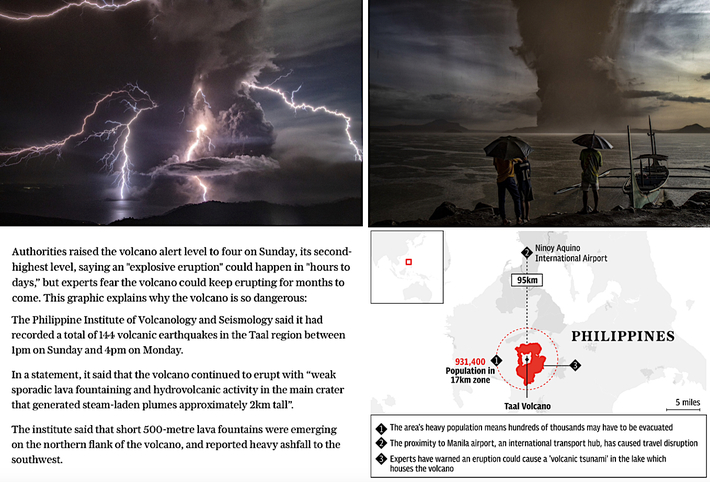 weeks" if such activity continues, Renato Solidum, chief of the Philippine

The local disaster office said it had evacuated over 2,000 residents living

on the volcanic island, which lies inside a bigger lake formed by previous

of people living on another island nearby if the situation worsens.

at Manila's international airport on Sunday.

"Flight operations at the Ninoy Aquino International Airport have been

temporarily suspended due to the volcanic ash from the eruption of

Earthquakes and volcanic activity are not uncommon in the Philippines

due to its position on the Pacific "Ring of Fire", where tectonic plates

collide deep below the Earth's surface. In January 2018, Mount Mayon

displaced tens of thousands of people after spewing millions of tonnes

of ash, rocks, and lava in the central Bicol region.

Agence France-Presse reporting in The Telegraph 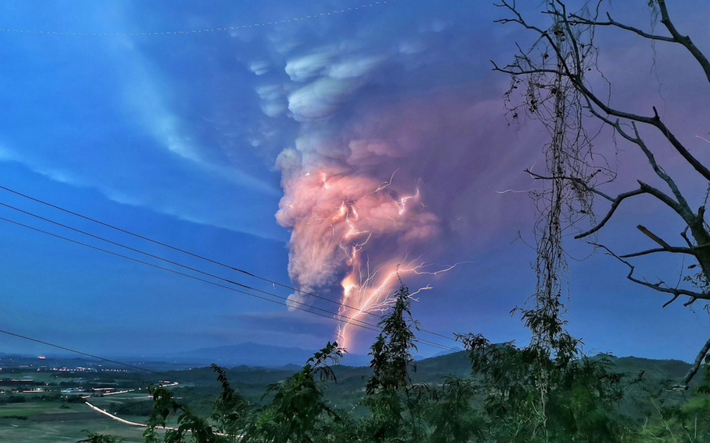 Rare volcanic lightning seen as huge numbers evacuated
over  fears of 'explosive eruption' in Philippines.
The Philippines is preparing to evacuate hundreds of thousands
of people in the path of an active volcano amid warnings of an
“explosive eruption” that could also trigger a deadly tsunami.
More than 24,000 people have already been forced to flee their
homes and take shelter in 75 evacuation centres since the Taal
volcano suddenly spewed a plume of ash from its crater half a
mile into the air on Sunday.
The volcano continued erupting throughout Monday as desperate
residents left their homes and possessions behind. Ash blew
across Manila, the capital city, closing down schools and offices as
traffic came to a halt and hundreds of flights were grounded at the
main international airport. 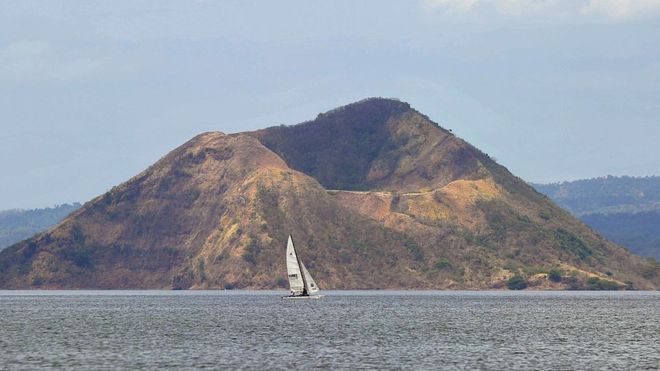 Taal is one of the Philippines' most active volcanoes. Over the past few days, it's begun spewing lava, triggering earthquakes and emitting huge plumes of ash that have spread across the island of Luzon and beyond. Scientists fear a bigger "hazardous eruption" is imminent. Taal is tiny, as volcanoes go, but it has been deadly before. And according to Renato Solidum, the head of the Philippines' Institute of Volcanology and Seismology (Philvolcs), it is "very small but a dangerous volcano".

So what is it about Taal that has got people so worried ?

[IT]'s a 'COMPLEX' VOLCANO - Taal is defined as such because - it doesn't have just one main vent or cone but several eruption points that have changed over time.