cathedral, according to French reports.

An initial fire alarm sounded at 6.20pm local time but after failing to find a blaze, security services at the landmark dubbed it a false alarm, according to sources cited by Le Parisien.

At 6.43pm,  almost 25 minutes later, a second alarm went off. Only when they returned to the upper area of the edifice did they call in firefighters, after coming across three-metre flames at the base of the spire.

According to Le Parisien, the computer glitch had caused the alarm to signal the wrong location. The reports came as the fund set up to help rebuild Notre-Dame passed one billion euros.  Emmanuel Macron has pledged to restore the fire-ravaged cathedral in five years.

Donations from worshippers and wealthy French billionaires and corporations have seen hundreds of millions of euros raised since the cathedral was engulfed by flames on Monday.

Contributors include Apple and magnates who own L'Oreal, Chanel and Dior, as well as Catholics and others from around France and the world.

Authorities consider the fire an accident.

Pope Francis today thanked Paris firefighters who risked their lives to save the Notre-Dame Cathedral on behalf of the Catholic Church.

During a weekly general audience in Saint Peter's Square, he said: "The gratitude of the whole Church goes to all those who did everything they could, even risking their lives, to save the Basilica." 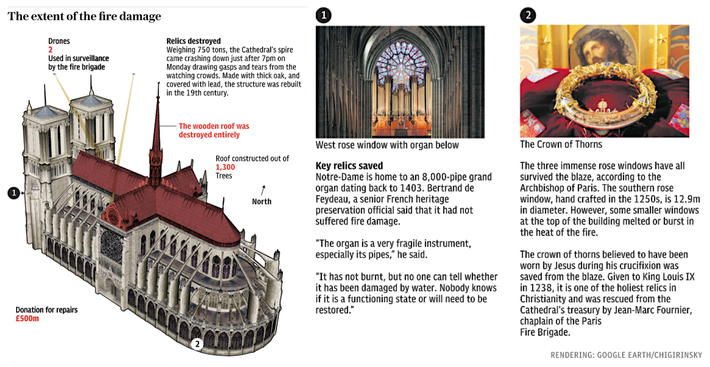