Neutrinos - The Spirit Particle? - The Fragrance

Werner Herzog ("Grizzly Man," "Rescue Dawn") confirms his standing as poet laureate of men in extreme situations with ENCOUNTERS AT THE END OF THE WORLD.

In this visually stunning exploration, Herzog travels to the Antarctic community of McMurdo Station, the hub of the US Antarctic Program and home to eleven hundred people during the austral spring and summer  (Oct-Feb). Over the course of his journey, Herzog examines human nature and Mother nature, juxtaposing breathtaking locations with the profound, surreal, and sometimes absurd experiences of the marine biologists, physicists, plumbers, and truck drivers who choose to form a society as far away from society as one can get.

"Dr. Peter Gorham, a physicist at the University of Hawaii who was then leading the neutrino detection project in Antarctica. Dr. Gorham said he  and his team are trying to be the "first scientific group to detect the   highest energy neutrinos in the universe."

This led to a brief exchange between Herzog and Dr. Gorham.

Herzog: Yeah, but Dr. Gorham, what exactly is a neutrino ?

Gorham: "The neutrino...is the most ridiculous particle you could imagine. A billion neutrinos went through my nose as we were talking. A trillion, a trillion of them went through my nose just now, and they did nothing to me. They pass through all of the matter around us continually, in a huge, huge blast of particles that does nothing at all. They're like...they almost exist in a separate universe, but we know, as physicists, we can measure them, we can make precision predictions and measurements. They exist, but we can't get our hands on them, because they seem to just exist in another place, and yet without neutrinos, the beginning of the universe would not have worked. We would not have the matter that we have today, because you couldn't create the elements without the neutrinos. In the very, very earliest few seconds of the big bang, the neutrinos were the dominant particle, and they actually determined much of the kinetics of the production of the elements we know. So, the universe can't exist the way it is without the neutrinos, but they seem to be in their own separate universe, and we're trying to actually make contact with that otherworldly universe of neutrinos. And as a physicist, even though I understand it mathematically and I understand it intellectually, it still hits me in the gut that there is something here around surrounding me almost like some kind of spirit or god that I can't touch, but I can measure it. I can make a measurement. It's like measuring the spirit world or something like that. You can go out and touch these things." 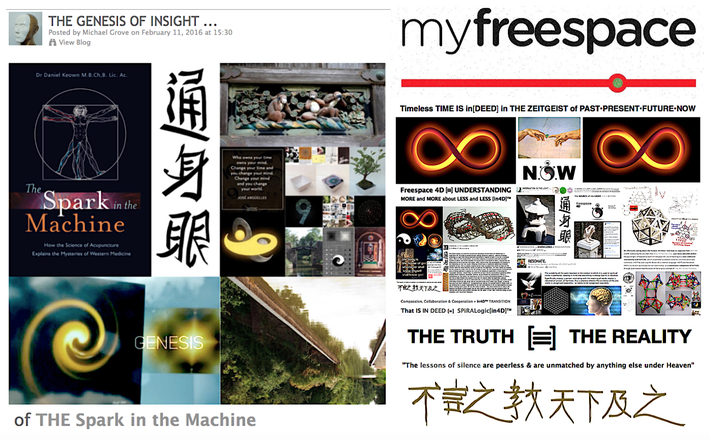 NEVER FORGETING that EVERY neutrino has an anti-neutrino,

which confirms that the very basic components of y[OUR]

UNIVERSE [RE]flect and confirm the findings of Dr. Daniel Keown's

concept of the YIN and YANG nature of the Spark in the Machine.

afford to ignore over 5000 years of Chinese medical tradition,

cannot be part of truly scientific medicine. With a radical new

approach which ties together Western medicine and the Chinese

energetic system, The Spark in the Machine will take you on a

journey over billions of years to the outer realms of medical

science to explain what the ancient Chinese always knew, but