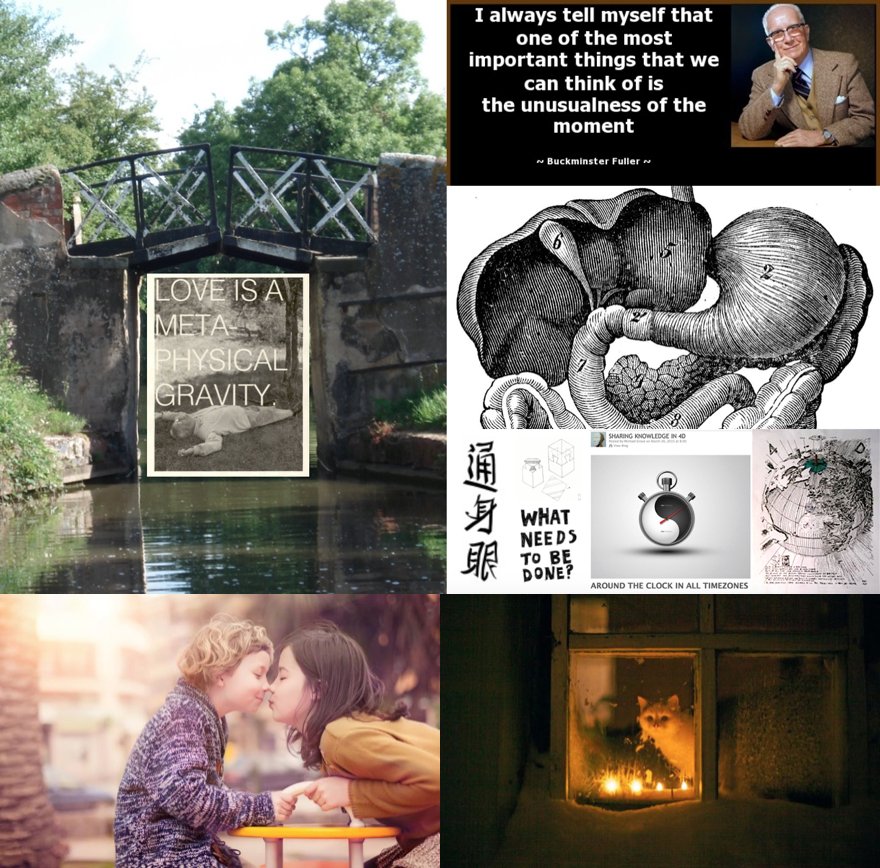 Radiation is plural and differential,

radiation is focusable, bearable, and self-sinuising,

is interruptible, separatist, and bias able -

Gravity is unit and undifferentiable

all of which characteristics of gravity

are also the characteristics of love.

As Lucy Cavendish has reported in this article for the Telegraph,

Being warm makes us feel happy and loved and content. If I think of lying in

the sun and letting the warmth creep over my body, I feel good. It equates

in me to a sensation of wellbeing and happiness. This is more than just

wellbeing caused by a boost in endorphins. Psychologist Elizabeth Lombardo,

author of A Happy You: Your Ultimate Prescription forHappiness, says

that being physically warm also releases these endorphins – as does eating

warming things such as chillis. But given that we are in January and warm

weather seems far away, how do you feel warm on the bleakest week of the

year? One way might be to do good deeds. We love it when we do something

kind for someone, however small that gesture might be.

Again, this is to do with the chemicals in our brains. According to Stephen

G Post, director of the Centre for Medical Humanities at New York’s Stony

Brook University, being nice to others triggers the release of the pleasure

chemical dopamine, as well as endorphins, which give a sense of euphoria,

and oxytocin, which is associated with tranquillity, serenity, or inner peace.

Oxytocin mediates the tend-mend response, the opposite of the

altruism as a concept is not very old. The word itself didn’t exist until 1851

when the French philosopher Auguste Comte coined it, based on the Latin

word alteri, “others”. But it’s always been known that doing a good deed

can make us feel better. It’s that warm and fuzzy feeling we get after doing

in the first place.

she’s done something good. We all love to feel that "warm glow". It’s similar

excited and contented at the same time. “That act of giving modulates the

brain system in the same way that receiving does,” says Scott Huettel,

professor of psychology and neuroscience at Duke University. “The brain

regions that deal with motivation show increases in activation when people

Last year, researchers from the University of Groningen in the Netherlands

warm feeling. Scientists found out that when volunteers thought they were

helping the environment their perception of temperature changed,

estimating the room temperature as warmer than it was. The report’s

concept, which is reflected in a literal warm glow."

the same endorphins that are released when you laugh. Researchers listed

behaviour that produced this effect: giving compliments, donating food to

a homeless person, laughing with someone, behaving courteously, giving

about their day and being genuinely interested and telling people when

you have received good service from them. So, we equate doing good

make us feel loved. Many believe our strongest moral principles are based

on wanting these warm, positive feelings. Love of country or community,

loyalty to a common cause. Love for animals, co-workers, children, friends

and family. All produce the same chemicals in our brains as being safe and

In other words, we don’t need just to love ourselves to feel good

in these dark weeks. It’s the love of others that really lights us up.

of gravity that Dr. Daniel Keown has proposed as ...

THE SPARK in the MACHINE