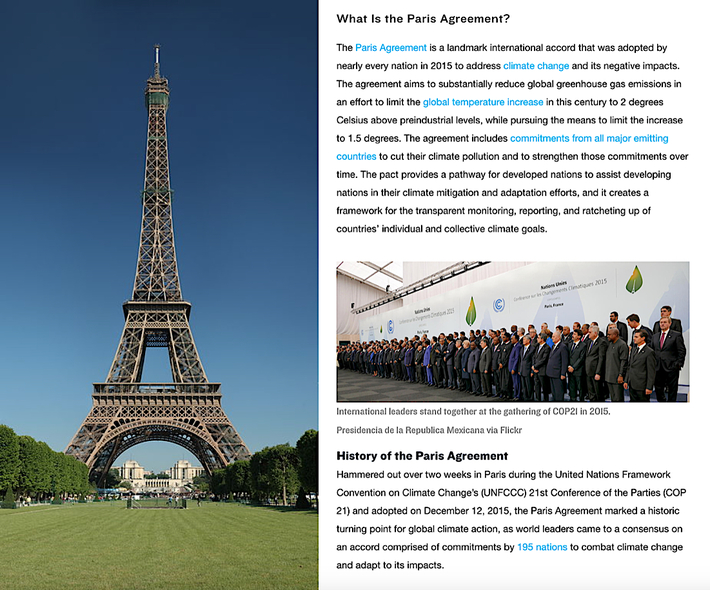 IT's 100th Anniversary. The tower was built to commemorate the 100th anniversary of the French Revolution and was the center-piece of the Exposition Universelle of 1889.

Construction began in January 1887 and was completed on 31 March 1889 - truly a testament to the convictions & professionalism of those who built it - in view of the fact that the temporary stucture  is still standing and likely to be in another 100 years.

Paris Climate Agreement: Everything You Need to Know

The Paris Agreement charted a new course in the effort to combat global climate change, requiring countries to make commitments and progressively strengthen them. Here’s what the accord seeks to achieve, and why our future may depend on its success   Melissa Denchak  -  February 19, 2021
.
.
First posted by Michael Grove on March 31, 1989 at 16:30 at which [TIME]
a senior U.N. environmental official was saying... “Entire nations could be
wiped off the face of the Earth by rising sea levels if the global warming
trend is NOT reversed by the year 2000.”
. The Paris Agreement and Trump • Following through on a   campaign promise, Trump—a climate denier who has claimed climate change is a “hoax”—announced in June 2017 his intent to withdraw the United States from the Paris Agreement and officially pulled the nation out on November 4, 2020—the earliest possible date under the agreement and a day after the presidential election. Thankfully, even a formal withdrawal can be reversed since a future president can rejoin.

How Many Countries Are in the Paris Agreement?

Since 2015, 197 countries—nearly every nation on earth, with the

Agreement. Of those, 190 have solidified their support with formal

approval. The major emitting countries that have yet to formally join

the agreement are Iran, Turkey, and Iraq.