Consequences of DISGRACEFUL LACK OF... APPROPRIATE ACTION on every aspect of

Most rain on the Iberian peninsula falls in winter as wet,

low-pressure systems blow in from the Atlantic. But a

high-pressure system off the coast, called the Azores high,

can block the wet weather fronts. The researchers found

increased dramatically from one winter in 10 before 1850

to one in four since 1980. These extremes also push the

said the more frequent large Azores highs could only have

been caused by the climate crisis, caused by humanity’s

“The number of extremely large Azores highs in the last

100 years is really unprecedented when you look at the

Woods Hole Oceanographic Institution in the US, and part

of the research team. “That has big implications because

conditions for the Iberian peninsula and the

Mediterranean,” she said. “We could also conclusively link

this increase to anthropogenic emissions.” The Iberian

peninsula has been hit by increasing heatwaves and

droughts in recent years and this year May was the hottest

on record in Spain. Forest fires that killed dozens of people

in the region in 2017 followed a heatwave made 10 times

more likely by the climate crisis, while the Tagus River, the

longest in the region, is at risk of drying up completely, 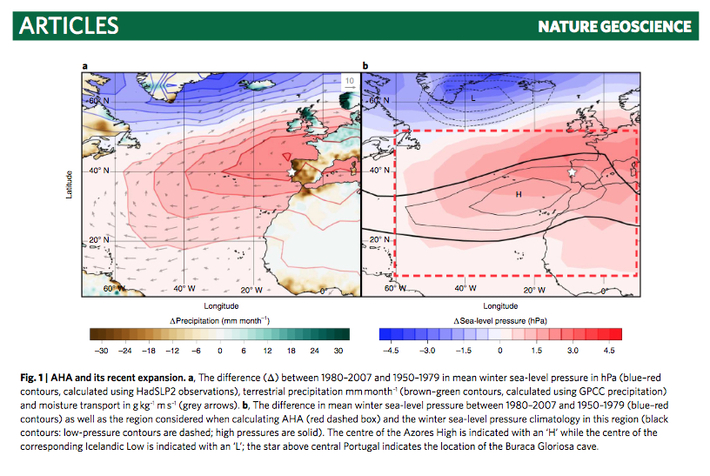 The new research, published in the journal Nature Geoscience, analysed weather data stretching back to 1850 and computer models replicating the climate back to AD850. It found that, before 1850 and the start of significant human greenhouse gas emissions, extremely large Azores highs occurred once every 10 years on average. From 1850 to 1980, the frequency was once every seven years, but after 1980 this rose to every four years. Data showed that extremely large Azores highs slash average monthly rainfall in winter by about a third. Further data from chemical analysis of stalagmites in caves in Portugal show that low rainfall correlates closely with large Azores highs.

The computer simulations of the climate of the past millennium cover a period up to 2005. But other studies covering later years are consistent with new findings and the Azores high is expected to continue to expand, further increasing drought on the Iberian peninsula, until global carbon emissions are cut to net zero. Sharma is the leading green voice in the cabinet, having won plaudits around the world for his skilful chairing of the fractious UN Cop26 climate summit last November. The UK retains presidency of the talks until Egypt takes over this November, at the next conference Cop27 in Sharm el-Sheikh, and until then the UK will play a vital role in convening nations to fulfil their Cop26 promise to limit global heating to 1.5C. Sharma was tipped to be the UN’s next climate chief, after the outgoing top official Patricia Espinosa, whose term ended this month, but said he had decided against applying, in order to stay on as Cop president until the end of the UK’s presidency.

So IS [IT] any surprise that the cabinet minister and Cop26 president could resign [IF] the new Tory leader fails to commit to a strong green agenda !!!???

“This is absolutely a leadership issue,” Sharma said, accusing some of the candidates of being “lukewarm” on net zero in the contest so far.

“Anyone aspiring to lead our country needs to demonstrate that they take this issue incredibly seriously, that they’re willing to continue to lead and take up the mantle that Boris Johnson started off. I want to see candidates very proactively set out their support for our net zero agenda for green growth.”

His comments came as the UK braced itself for record-breaking temperatures of 40C (104F) over the coming days, while fires raged across large parts of the continent.

In south-western France and Spain thousands of people had to be evacuated from their homes. More than 12,200 people had fled France’s Gironde region by Saturday morning as 1,000 firefighters battled to bring the flames under control.