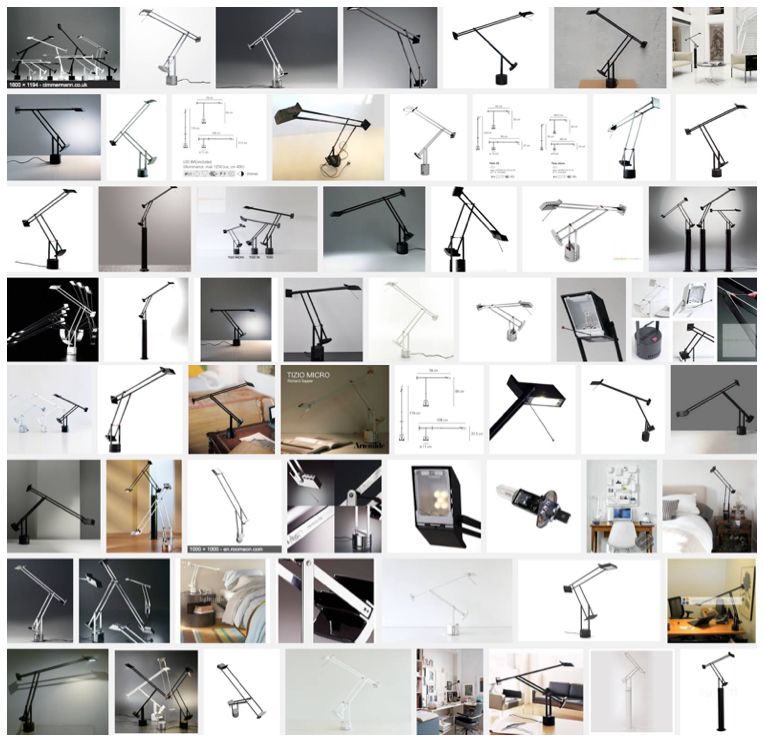 Tizio is a desk lamp created by Richard Sapper for Artemide in 1972.

He was born 1932 in Munich, and is a German industrial designer based

in Milan, Italy. He is considered one of the most important designers of

his generation, his products typically featuring a combination of technical

innovation, simplicity of form and an element of wit and surprise. His

Tizio desk lamp has been selected for the Compasso d'Oro industrial

design award in 1979. An item of the range is part of the collections of

the Metropolitan Museum of Art and of the Museum of Modern Art.

The position and the direction of the bulb can be adjusted; thanks to two

counterweights, moving it requires little effort. Two other features of this

the arms), and the halogen bulb, which was previously mainly used in the

The Tizio is available in a variety of sizes and colours; the original, and

most widely known, is the 50 (referring to the wattage of the bulb) in

black. The mid-sized model is the 35, and there's the bedside-sized Micro

(20 Watts). Other colours are white, and grey metallic; and, the occasional

limited edition in polished aluminium, or titanium-colour. There also is a

floorstanding version, the Terra, which consist of a 70-centimeter-high

pedestal with the same 11 cm diameter as the lamp's base, with the 50

added on top. The Terra-stand is also available in a 10 cm diameter,

of the full-sized model has been added; as has a version of the regular

50 with a horizontally rotatable head, the Plus. The LED version is

equipped with a dimmer; all other versions have a three-position switch,

allowing for off, full, and – approximately – half power.

added, a thin, wire handle was added to tilt the head as it becomes very

hot. My own original version does on occasion run hot, but although

looking a little worse for wear, since I purchased it in Geleen NL in 1972,

it still produces its own excellent light, and I see little need to replace the

unit for an LED version, although most of our other lighting is now