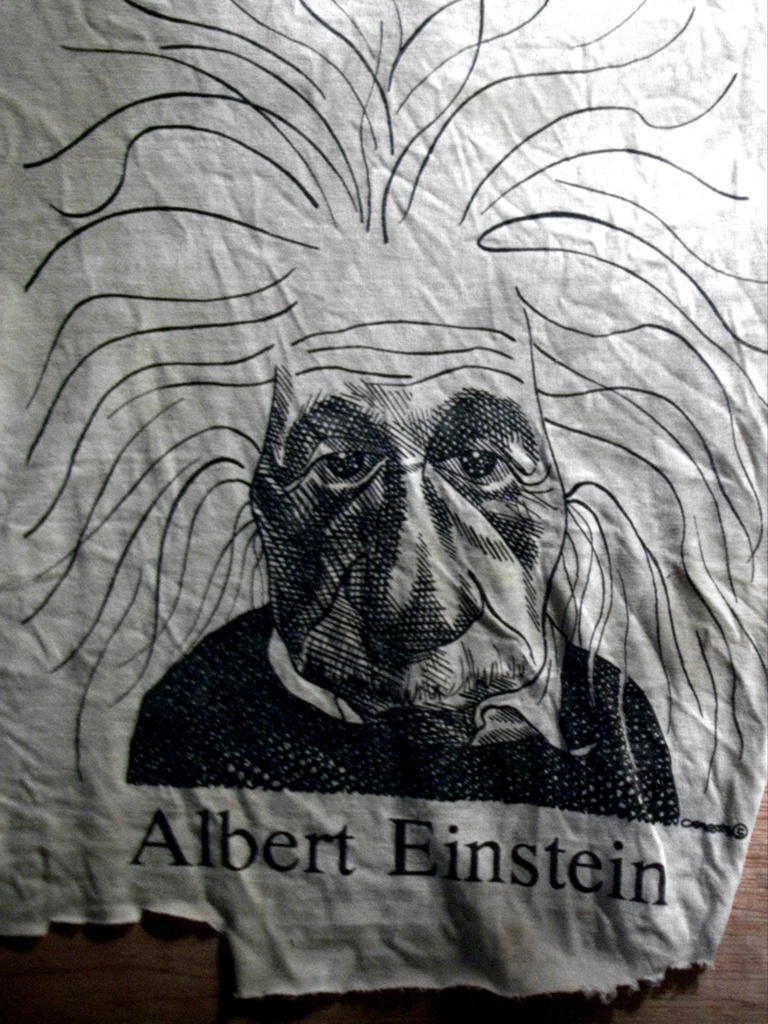 Peace cannot be achieved through violence, it can only be attained through understanding.

A human being is part of a whole, called by us the "Universe," a part limited in time and space. He experiences himself, his thoughts and feelings, as something separated from the rest - a kind of optical delusion of his consciousness. This delusion is a kind of prison for us, restricting us to our personal desires and to affection for a few persons nearest us. Our task must be to free ourselves from this prison by widening our circles of compassion to embrace all living creatures and the whole of nature in its beauty.

Albert Einstein (01)
Imagination is more important than knowledge, for knowledge is limited while imagination embraces the entire world, and all there ever will be to know and understand.

How strange is the lot of us mortals ! Each of us is here for a brief sojourn; for what purpose he knows not, though he senses it.
But without deeper reflection one knows from daily life that
ONE exists for other people.


Albert Einstein died on April 18th 1955 - but, arguably, as The New Scientist has subsequently proposed - he died as a scientist three decades earlier. For it was then that the genie he let out of the bottle in 1905 finally escaped from his control. The genie was the "photon" - the bullet-like particle that Einstein invented to explain how light was able to knock electrons from metals and which he claimed was spat out and swallowed by atoms. His self-proclaimed "reckless hypothesis" would eventually overturn everything he believed in.

In the context of his relativity & space / time concepts, however - the SPIRIT of Einstein would no doubt reflect on the fact that - his own power of knowledge at the time he propounded these ideas - however metered by humility - became manifest at the time & place they were due to do so as part of the ONE evolutionary process.

Early in 1944, Dr. Carl Gustav Jung fell and broke his foot. Following this, he had a heart attack. In a drugged state and close to death, he fell into an unconscious delerium and had an out-of-body
experience. Jung was disappointed and resented coming back to life. After his illness and near-death experience, Jung's principle works were written. During his seventies, that strange "something" called the SOUL was proving stronger than ever, and Jung was now prepared to give it voice.

At the age of 85, on the last evening of his life, Jung opened and drank one of the best wines in his cellar. He died peacefully the following day, 6th June 1961, in his house on the lake & a great storm broke over the lake in the hour following his death. The myth of Jung had only just begun.

OSHO - left his body - on January 19, 1990 - Just a few weeks before that time, he was asked what would happen to his work when he was gone. He said - My trust in existence is absolute. If there is any TRUTH in what I am saying, it will survive .... The people who remain interested in my work will simply be carrying the torch, but not imposing anything on anyone .... I will remain a source of inspiration to my people ... I want them to grow on their own - qualities like LOVE, around which no church can be created - like awareness, which is nobody's monopoly - like celebration, rejoicing, and remaining fresh, childlike eyes ... I want my people to know themselves, not to be according to someone else.
AND the way is IN
Einstein's famous words - as well as Jung's and OSHO's - required that SPIRIT -
with SOUL departed - should pass "the torch" - to the SPIRIT of other SOULs -
for the qualitative enhancement of the evolutionary process - in no different
a way than others have done before & still more will be destined to do so.
.
.
First posted by Michael Grove @zaadz on January 30, 2007 at 14:00

:)Michael….how I can I get this fantastic T shirt?

Alas long since produced - worn until it fell off my back - used to buff polish the body-work of so many family “modes-of-transport” - and yet still made of a material worthy of KINGS.

… perhaps someone out their could reproduce this for US all @zaadz ??

The child never dies in anyone. It is not that the child dies when you grow, the child remains. Everything that you have been is still within you, and will remain within you until your very last breath.

But society is always afraid of nonserious people. Nonserious people will not be ambitious for money, or political power; they would rather enjoy existence. But enjoying existence cannot bring you prestige, cannot make you powerful, cannot fulfill your ego; and the whole world of man revolves around the idea of the ego.

Playfulness is against your ego—you can try it and see. Just play with children, and you will find your ego is
disappearing, you will find that you have become a child again. It is not only true about you, it is true about everyone.

Because the child within you has been repressed, you will repress your children. Nobody allows their children to dance and to sing and to shout and to jump. For trivial reasons—perhaps something may get broken, perhaps they may get their clothes wet in the rain if they run out—for these small things a great spiritual quality, playfulness, is completely destroyed.

The obedient child is praised by his parents, by his teachers, by everybody; and the playful child is condemned. His playfulness may be absolutely harmless, but he is condemned because there is potentially a danger of rebellion. If the child goes on growing with full freedom to be playful, he will turn out to be a
rebel. He will not be easily enslaved; he will not be easily put into armies to destroy people, or to be destroyed himself.

The rebel is basically natural. The obedient child is almost dead; hence the parents are very happy, because he is always under control.

Man is strangely sick: he wants to control people—in controlling people your ego is fulfilled, you are somebody special—and he himself also wants to be controlled, because by being controlled you are no longer responsible. For all these reasons, playfulness is stifled, crushed from the very beginning, and then people become afraid of their own playfulness, afraid of “losing control.”

Michael: Thank you for leading me to this post from my blog. I want more people to realize that it's all about making the child a mentally healthy adult. You tell him he's stupid (I can't believe parents do that, but
they do!) and he will believe it. It tortures the soul, and no little kid deserves that.

Encouraging the weak and the faint; giving strength and courage to those who have faltered - KEEP up the good work MiMi - you have most certainly been passed the torch

great post! thanks for leading me to it. people like this are my heroes, anyone who realizes the wisdom of universal love and is able to live accordingly.

By the aid of speech different individuals can, to a certain extent,

compare their experiences. In this way it is shown that certain sense

perceptions of different individuals correspond to each other, while for

other sense perceptions no such correspondence can be established.

We are accustomed to regard as real those sense perceptions which

are common to different individuals, and which therefore are, in a

measure, impersonal. The natural sciences, and in particular, the most

fundamental of them, physics, deal with such sense perceptions.

The conception of physical bodies, in particular of rigid bodies, is a

relatively constant complex of such sense perceptions. A clock is also

a body, or a system, in the same sense, with the additional property

which can be regarded as equal.

they serve to represent the complex of our experiences; beyond this

they have no legitimacy. I am convinced that the philosophers have

had a harmful effect upon the progress of scientific thinking in

removing certain fundamental concepts from the domain of

empiricism, where they are under our control, to the intangible

heights of the a priori. For even if it should appear that the universe

of ideas cannot be deduced from experience by logical means, but is,

in a sense, a creation of the human mind, without which no science is

possible, nevertheless this universe of ideas is just as little independent

This is particularly true of our concepts of time and space, which