science - biological, physical and social. IN meteorology, it led to the

conclusion that [IT] may be fundamentally impossible to predict

weather beyond two or three weeks with a reasonable degree of

accuracy. Some scientists have since asserted that the 20th century will

"By showing that certain deterministic systems have formal

predictability limits, Ed put the last nail in the coffin of the

Cartesian universe and fomented what some have called the

third scientific revolution of the 20th century, following on

the heels of relativity and quantum physics,"

"He was also a perfect gentleman, and through his intelligence,

integrity and humility set a very high standard for his and

THE DYNAMISM of CHAOS within THE SERENITY OF ORDER 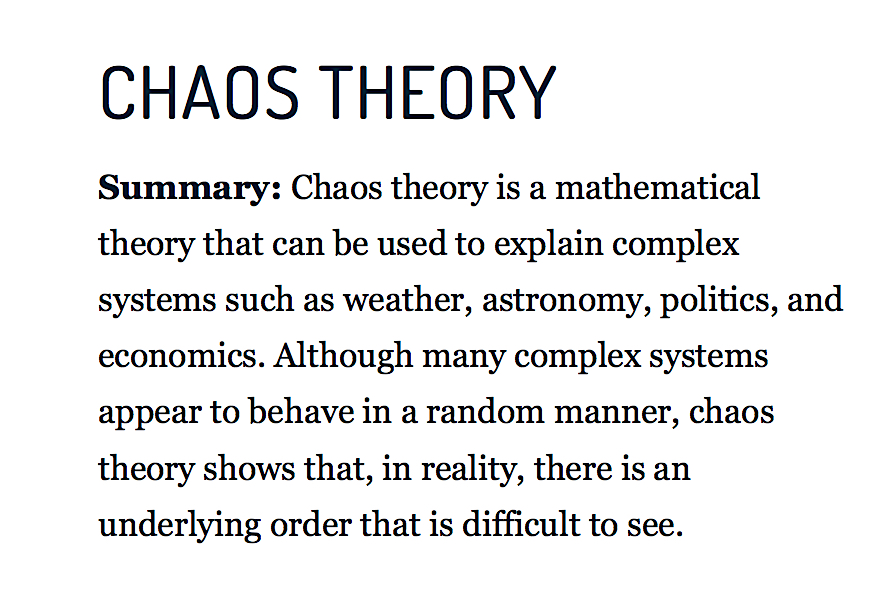 Many complex systems can be better understood through the

the groundwork for Chaos Theory.[i] He was the first to point

out that many deterministic systems display a “sensitive

concept in the following way: “It may happen that small

ones in the final phenomena. A small error in the former

will produce an enormous error in the latter. Prediction

that the apparent lack of order seen in many astronomical

systems was actually not random or chaotic. Instead,

astronomers were just not seeing the small changes in initial

conditions that were leading to humongous differences in

the final phenomena that were being observed.

Later, in the 1900s, Edward Lorenz officially coined the

predictions, he noticed that his calculations were

significantly impacted by the extent to which he rounded

his numbers. The end result of the calculation was

significantly different when he used a number rounded to

three digits as compared to a number rounded to six digits.

His observations on Chaos Theory in weather systems led to

his famous talk, which he entitled, “Predictability: Does the

Texas?" In reference to this talk, Chaos Theory has also

been described as the “butterfly effect.”

Chaos Theory has a lot to teach people about decision

making in complex environments. The mathematical

being applied to social environments such as politics,

economics, business, and other social sciences.[ii]

Although applying Chaos Theory to business settings IS

still in its infancy, social scientists describe the following This is an inspirational book, a call for action, and a basis for hope. We have entered a window of opportunity that the author brilliantly illustrates using the concepts of chaos theory. Dr. Ervin Laszlo is a unique scientist who founded systems philosophy and general evolution theory. But he is also the founder and president of the Club of Budapest, an informal association of highly creative people who use their insight to enhance awareness of global problems and human opportunities.

The book starts with a Chinese proverb that warns, “If we do not change direction, we are likely to end up exactly where we are headed.” The author then summarizes the problems the world is now facing and their causes. He emphasizes that we are at a critical juncture in history. We now face a “decision-window.” We are headed on a path towards global breakdown where societies will experience accelerating terrorism, crime, wars, intolerance and an inhospitable biosphere for human life. Thus, there will either be a global breakdown of civilization or a breakthrough to a better future for our children and us.