of Great Barrington for their own take ... 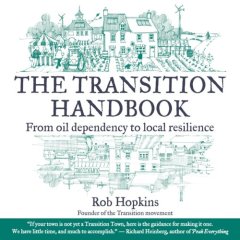 I’ve just finished reading the Transition Handbook. Reading it has changed me. I’ve known about the transition movement for some time – I’ve been hearing Peter Merry talk about his experiences in the early days of Transition City Den Haag. We’ve been talking about transition countries – even Transition Planet. Now I know better what the fuss is about, and I’m all fired up!

The Transition Initiative is definitely a product of our times. To quote Richard Heinberg “If the 20th century was one of unprecedented growth in nearly every significant parameter (population, energy use, per capita consumption levels, etc.), the present century promises to be one characterised by declines in nearly all of those same categories, along with catastrophic weather events and drowning coastlines”.

The Transition Initiative is concerned with the transition to a post-fossil fuel society, based on the necessity of change forced by the twin premises of peak oil and climate change. Heinberg again: “Fossil fuel depletion might be seen as a good thing, given the horrific environmental costs of using those fuels. But our societal dependencies on oil, coal and gas constitute an enormous collective vulnerability, since there are no ready substitutes capable of fully replicating their services.

Thus, as fossil fuels go into decline, we will see a century of contraction in consumption levels that could cause the global economy to implode, undermining the survival prospects for the next generation. Unless we wean ourselves from these fuels proactively, societal support systems will crash just as the global climate gets pushed past a tipping point beyond which there will be nothing humans can do to avert worst-case impacts including sharply rising sea levels and devastated crops. Depletion and climate issues converge to make a deliberate, cooperative transition away from fossil fuels the centrepiece of our human survival strategy for the remainder of the 21st century.”

... and IF you are still NOT CONVINCED

take an hours break and steep yourself

in this VISION of Jeremy Rifkin

Hi Grey! I think that competition is a key part of the picture - nothing wrong with it at all, it's a great evolutionary strategy - but there comes a moment  when it is no longer healthy or constructive. That's when it becomes destructive - we need to know when our behaviour is becoming pathological, and be able  to diversify into healthier behaviours as the context requires.

Right now, I suspect that we aren't quite awake enough as a species to be aware that we have a choice in how to behave. My sense is that that awareness is over the horizon right now, outside our awareness until we complete this next phase of our collective evolution, which we are heading into now. The global transition we are currently embarked on - if we make it through - could well be the watershed beyond which we can awaken as a unified human family and really get our shit together.

and no better succinct overview explanation of ”the situation” than
that presented by Monty Don the new President of the Soil Association.

… as I have said elsewhere, however, IT IS NOT just about holistic thinking

“It may feel that you will have to do it all yourself. You may feel overwhelmed by the prospect of all the work and complexity, but people will come forward to help. Indeed, many have commented on the serendipity of the whole process, how the right people appear at the right time. There is something about seizing that boldness, about making the leap from ”why is no-one doing anything ” to ”let's do something”, that generates the energy to keep it moving.”

Beyond sustainability through cooperation and collaboration - in fact

“If the Transition Initiative is empowering for communities, THAT IS because there is an enormous latent energy there to be tapped, so that communities may be authors of their own story, hopeful, active, and belonging, rather than despairing, passive, and cynical.”

Transition Town: What's it all about?

Trade watchdog groups have warned that the TPP and TTIP could constrict local and national governments’ ability to protect and promote their local economies – a fact that should inspire localists around the world to join the movement against these treaties.

For instance, a recent Institute for Agriculture and Trade Policy (IATP) report notes that Malaysia currently “prohibits foreign investment in supermarkets, fostering the development of locally owned grocery stores”.[vi] Several chapters in the TPP could directly challenge this   law and open the way for Wal-Mart or other transnational supermarket chains to put locally-owned stores out of business. Study after study have shown that these big-box corporate behemoths are an “economic cancer” on our communities.[vii]

The TPP and TTIP could also include provisions that prevent local and national governments from instituting pro-local procurement programs, such as local purchasing preferences that favor sustainable and locally grown foods (e.g. Farm to School programs in the US). According to IATP trade expert, Karen Hansen-Kuhn: “Both the U.S. and EU have criticized ‘localization barriers to trade’. The EU, in particular, has been insistent on the inclusion of procurement commitments in TTIP at all levels of government, for all goods, and in all sectors…”[viii]

A Vision for Conscious Community

We see a world where groups and circles of people gather together regularly to support one another in the manifestation of whatever their individual dreams are; where people easily align with each other because everyone wants only for the highest good of all and everyone else; and where the people are socializing, sharing food, playing, and having fun when they come together.

We see communities popping up everywhere with high creative ideals; where new ideas, inventions, arts, handicrafts, technological and recreational projects abound; and where the people are loving what they do because they are doing what they love.

And we see communities frequently devoting time together for the sacred aspects of life; where they remember to create a spiritual environment that makes it easy for everyone in the community to experience ONENESS.

A Vision for Family and Community

I envision a world where there is no longer any need for a government department of social services or child protective services. There is no need as the families are all intact - a mother, father, divine loving groups of people working together to raise our beautiful children. None will be living on the street as every community will provide for and care for everyone else in the community, especially the children.

I see a world where prevention of anything to protect children is unnecessary as all children will be nurtured......Divine loving, caring, families...Divine Feminine / Masculine energy surrounding and being the cornerstone of every family.

The Intenders of the Highest Good; Vision Alignment Project by Michael-Manna

'8 days @ COP21' is the work of filmmaker Emilio Mula who, traveled to to Paris with Rob Hopkins & the Transition T.E.A.M.


"As Rob remarked so cleverly, Transition Towns is like the missing piece of the puzzle! Many young people are looking for a way to count in society and this is a great way to integrate" - THClover

"Something brilliant and historic [IS] already underway, and our message to the Obamas, Camerons and Merkels of the world is that they need to support and enable [IT] ... because it's the future."

From '21 Stories of Transition'.

Something is stirring. People around the world are deciding that the well-being of their local community and its economy lies with them. They’re people like you. They’ve had enough, and, rather than waiting for permission, they’re rolling up their sleeves, getting together with friends and neighbours, and doing something about it. Whether they start small or big, they’re finding that just doing stuff can transform their neighbourhoods and their lives.

The Power of Just Doing Stuff argues that this shift represents the seeds of a new economy – the answer to our desperate search for a new way forward – and at its heart is people deciding that change starts with them. Communities worldwide are already modelling a more local economy rooted in place, in well-being, in entrepreneurship and in creativity. And it works.

Praise for The Power of Just Doing Stuff

“Once upon a time it was tempting to mock the idea of a ‘Transition town’ or even transition itself. Rob Hopkins is a truly original thinker who has not only given that concept meaning but has put it into practice in a way that now influences individuals and communities in many parts of the world. The essential proposition is not only that we have to adapt our way of life to meet the enormous environmental challenges that we face but that it is quite possible – and no less practically to the point – a stimulating and enjoyable process as well. IF ever there was an idea whose time has come, this is it. Rob Hopkins’ book is a truly unique piece of work that anyone who cares about our future in this densely populated and threatened world should read. It offers original thought and clear analysis. It also combines realism and hope”.

‘From What Is to What If’ reviewed in Times Educational Supplement

He asks us: “What if school nurtured young imaginations?” Of course, we’d all love to believe that imagination is fostered within the classroom, yet, as Hopkins highlights, “26 percent [of children] feel as though they do not need to use their imagination for their study or schoolwork”. He then provides numerous examples of where imagination is being fostered and nurtured, such as in The Green School in Copenhagen or the School of the Possible in France. By the end of the book, the “utopian ideal” that was set out in Hopkins’ introduction seems somewhat less distant, somewhat more achievable, and all it really takes is a bit of imagination.

Humans of course, ARE 'storytelling creatures'.

[IT]'s PART of WHAT MAKES US HUMAN. We tell stories that shape our sense of the world. We have strong cultural narratives, like the story that technology will save us. Or that everything [IS] God's plan. Or that the end is nigh and we're on the brink of collapse, but there's no better story to tell than the number of Transition Town "seeds" which have been sown and grown to fruition, since the first initiative to do so in Great Barrington

... and THE KEY to making ALL of THIS a REALITY as ME•WE

Short History of the FUTURE and predictions for THE 2030 SPIKE

solution to the question "ARE DEBT and INFLATION necessary

to CREATE currency?" well Rob Hopkins and the Transition Towns

but Ray Podder and his T.E.A.M.@ONE have now created a global

answer to that very question.