A story of life with VW 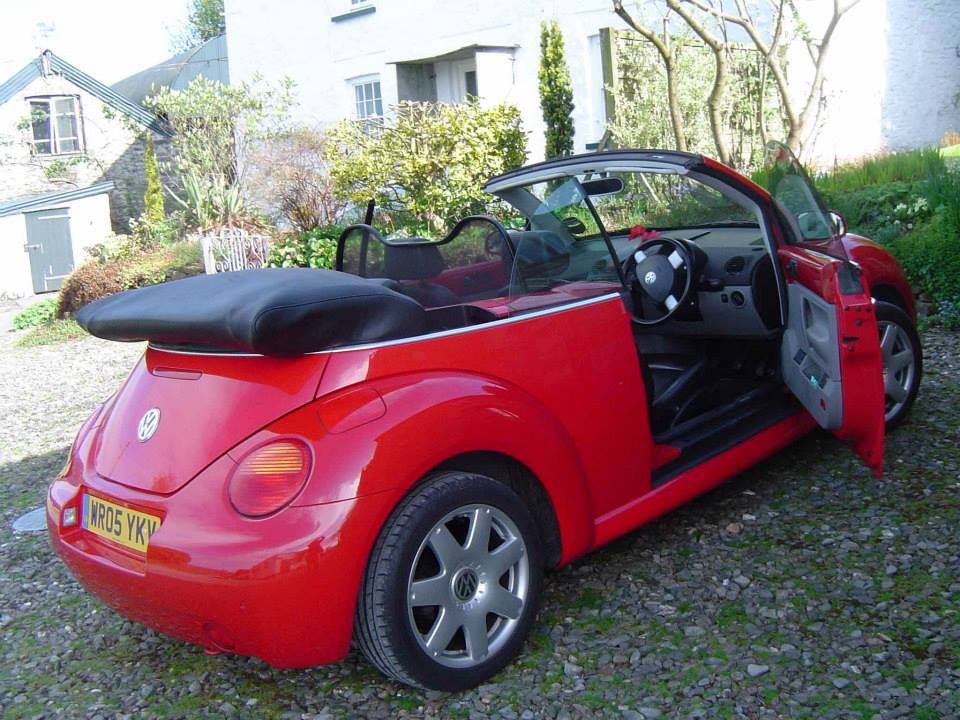 Having experienced the capability of an air-cooled VeeDub Beetle being

started inside of, & driven out from, a snowdrift in Meinerzhagen Germany,

during an exchange visit in the early 1960s, and then taken on a trip to

Coburg by way the Autobahn network, I was determined to eventually buy

one as my first car, subsequent to passing my driving test and getting a full

driving licence. Came the day, I finalised the deal to purchase a second-hand

and splashing onto the paperwork. That early entrepreneurial used-car

Citygate Colindale situated on the Edgware Road in North London.

miles plus in Golf GTIs of varying configuration, Linnie and I are about to

begin the 10th year of enjoyment of Linnie's New Beetle Cabriolet, which

I purchased for her when my Air Traffic Controller's pension began. 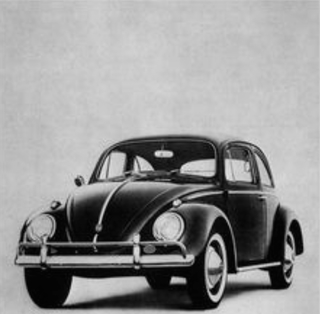 In the context, however, of the fact

that the very first time that I had to

have any VW mechanical repairs

executed, as a result of an air cooled

in Birmingham, offered me a

choice of repair, by way of utilising

after said repair, they offered me, in

a plastic bag, all of the broken parts

which tallied with the replacement

parts detailed in the invoice; IT IS amazing that - EU vehicle manufacturing

directives and other EU bureaucracy, together with nationally interpreted

rules, as well as the ever present dichotomy of ... "YOUR customer

brought us to a situation of complete exploitation of the paying customer,

by larger and ever larger corporations, without significant customer redress

to any of the multitude of tax-funded bodies of supposed regulation; in

disdain for the voting public, which they purport to represent, whilst

expecting that the very same voting public, continue to pay ever more

for the budget overruns of annual expenditure which have not been

This situation has been brought home to roost recently when, following a

spate of problems with Linnie's car - boot lock not working, having had it

repaired only a few thousand mile ago, and the driver's rear window not

assembly would cost £742.44. As a result of some internet research, it

appears that an actual repair kit can be purchased, for all New Beetle

delivery. The support video/s  for replacement, however, indicate that the

dealer repair quotation. My point IS, however, that the only option from

VW AG is to order a full assembly, some of which may not be required and

had been deducted - and ALL of this, we EU voters are told, IS because we

are far better off being part of the EU than NOT.

when I experienced such exemplary service, fixing a VeeDub engine,

from the main VW Dealership in Birmingham !!!???

production ... BUT there appears to have been a multitude of multiple

which must beg the question of 'fitness for purpose', of the vehicle in the

first instance. Has the customer again to pay for the consequences of

manufacturing/design faults as has been the case of bank account

those banks out of their mess by quantitative easing !!!???

ironically entitled ... CHECK AGAINST DELIVERY - could he mean delivery

of DECENT CUSTOMER SERVICE ? I think NOT ! - but YES the EU is good for

the operation of the business community but certainly NOT GOOD or

EVEN an IMPROVEMENT for the vast majority of the voting citizens,

who are paying through the nose for such largesse.

Comment by Michael Grove on September 13, 2014 at 12:33
ONLY weeks later I was subsequently faced with the situation where the replacement window had pulled the rubber rain guttering into the body which necessitated my contact with the VW garage again and the the sending of an email which read ...

You may recall the job to replace the offside rear window of my wife’s VW Beetle Cabriolet, registration WR05YKV, the repair of a boot-lid locking mechanism and the subsequent replacement of a driver’s door-mounted petrol flap unlocking switch.
The window rubber of said offside rear window has now come adrift from the bodywork and fallen a centimetre or so into the bodywork. It would appear that it has come ‘unglued’ and the glue looks quite old. Having agreed for the £700+ job to be done, regardless of the fact that a 50/50 arrangement was agreed with VW UK, the least that I would have expected is that, it would have been suggested that this rain deflection rubber should be replaced at the time of the job by a new one, in no dissimilar manner to a VW recommendation to fit a replacement water pump at the time of a cam-belt replacement. Or at the very least re-glue the old one in place to avert the no-doudt extensive addition labour now involved.
Instead of which, being £700+ lighter of pocket for the replacement window, a second boot-lock repair because the first one was not completed correctly and a replacement petrol flap switch - all driven from 'the driver’s side of the loom’ - I am back to square one with gaffer tape keeping the rain out of the car.
During the aforementioned repairs, I escalated my concerns to VW UK and was asked if on completion of the job, I would send an email detailing my complaint to Customer Services. I had two subsequent telephone calls from VW UK and I concluded with them that I was then happy. I am most certainly not a happy bunny now, following this latest incident with what I am beginning to believe is a £24K friday afternoon beetle, but will reserve judgement in this instance until next week when Tamara has booked the car in for 2 days.
.

... and there you presumed that my rant had finished !!!??? - OH NO, we had to have a new paint job on the drivers's door because the company charged with carrying out the valeting had somehow pulled off a large patch of laquer; several months trying to convince VW that a brand new £120.00 Continental tyre which they had been fitted as one of a front pair, had a slow leak, before it was finally replaced; and the latest saga of collecting the car after a £316.00 long life service, to drive away to the sound of a metallic screeching and then be told by the mechanic who did the service, that had he heard the noise he would have added as an advisory for attention on the invoice, when I had taken the vehicle in only 7500 miles from the last full service in completely working condition. Needless to say after all this anguish I now have a working VW Beetle Cabriolet, which I am still convinced, was designed and built not fit-for-purpose, other than the underpinning of the superb running gear and an air-con system which has proved absolutely fit for purpose during the recent unusual hot weather spell. 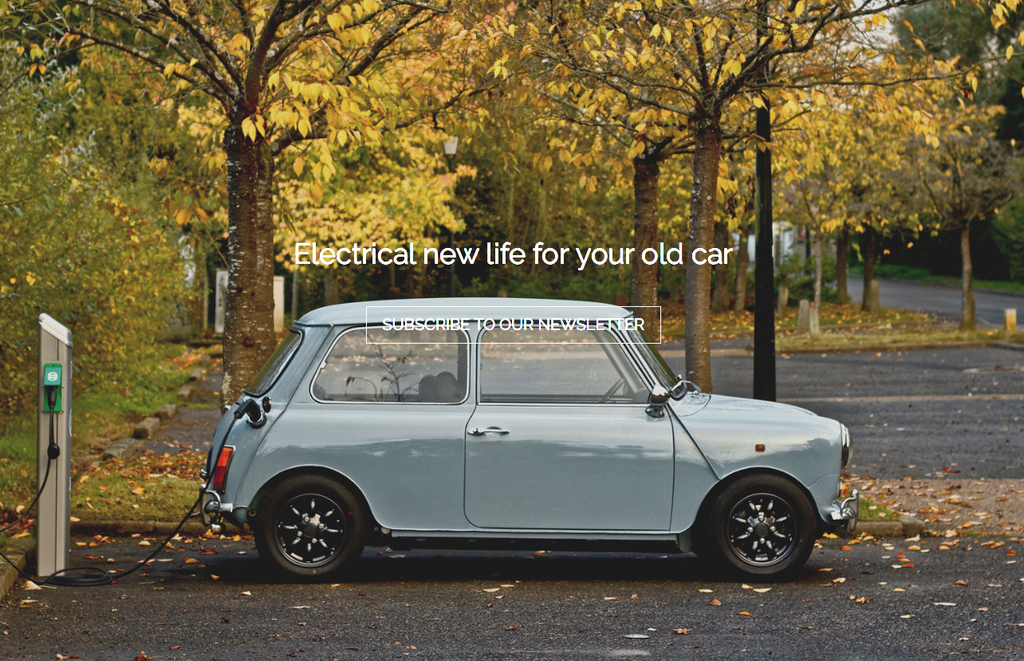 As our planet is threatened by global warming and climate change, solutions of all kind emerge to reduce human’s footprint on earth. The electric car is one of those solutions and allows for a more environmental friendly mobility around cities and further outside in the near future.

However, manufacturing a brand new car is energetically costly, the process itself emits a lot of greenhouse gases and pollutants. Should we destroy all existing vehicles to build new electric ones? A lot of old vehicles are sleeping in their garage and are not used by their owners, most of the time for mechanical reasons. Some of them are even scrapped but the biggest part of the vehicle is still good to go. That’s the reason why our team, with the passion and professionalism from the automotive industry, has created Ian Motion. Its ambition is to take part in the green transition by turning existing vehicles into restored electric ones. This process avoids the destruction of the car, the manufacturing of a new one and offers a real zero emission secondlife to the restored vehicle. 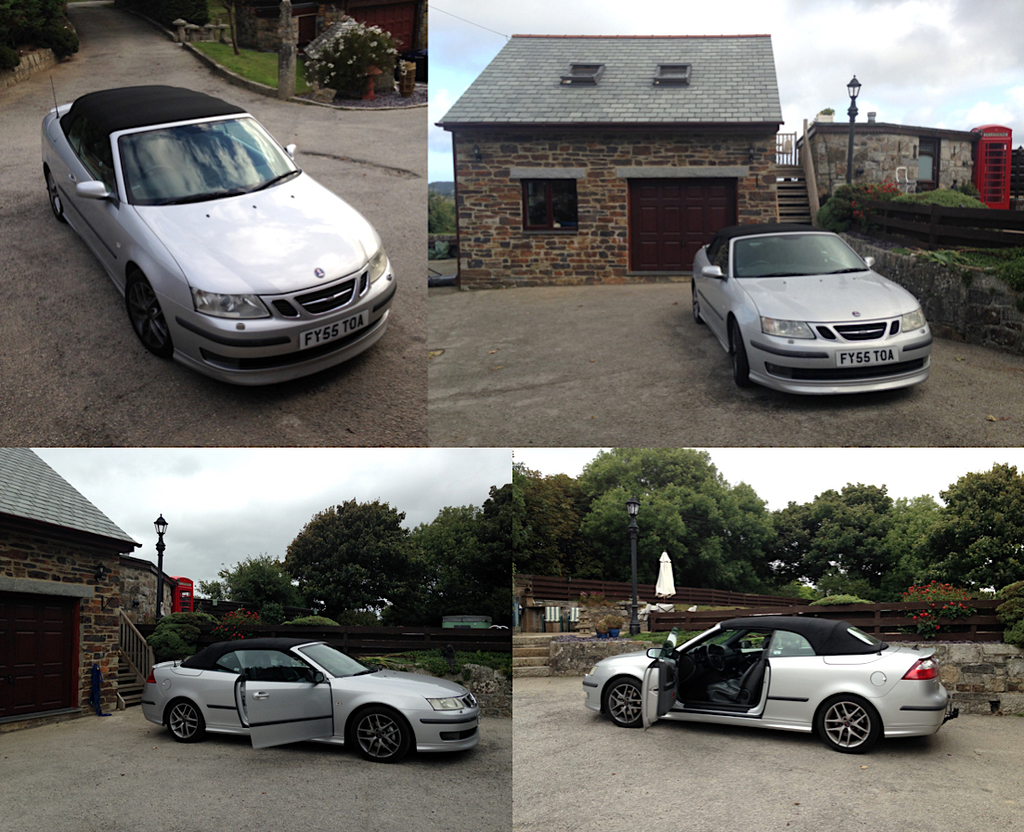 anywhere near the pristine condition that we have grown to expect

from VW during our 50 years together; the rear fitted roof window

showing signs of imminent failure; combined with a constant worry

of ever being able to start the vehicle, because of various electrical

faults which had resulted in the need for two previous emergency

we had to make a call for rescue yet again, being unable to start the

vehicle on our front drive. Having spent a good time making several

attempts to start the vehicle, by Green Flag it was recovered to our

local Greenmeadow Motors Garage, who then diagnosed a failure of

the electrics yet again and the need for VW specialist attention!!!

Having once travelled to Copenhagen in 826EAF and subsequently

attended a Race-Day at the Roskilde Ring, I had already been made

well aware of the engineering build quality of SAAB, so at that stage

we decided to cut our losses, trade-in the vehicle for scrap value

and purchase a 55 plate SAAB 93 Aero Convertible, a terrific car

to Cornwall • which looks and drives like new with 100,000 miles plus

on the clock compared with the 47,000 miles for the VW NEW BEETLE.

Having subsequently discovered the absolute shenanigans of the VW

senior management in the so called "Dieselgate Affair" as a British

purchaser of VWs I'm glad I quit when I did. 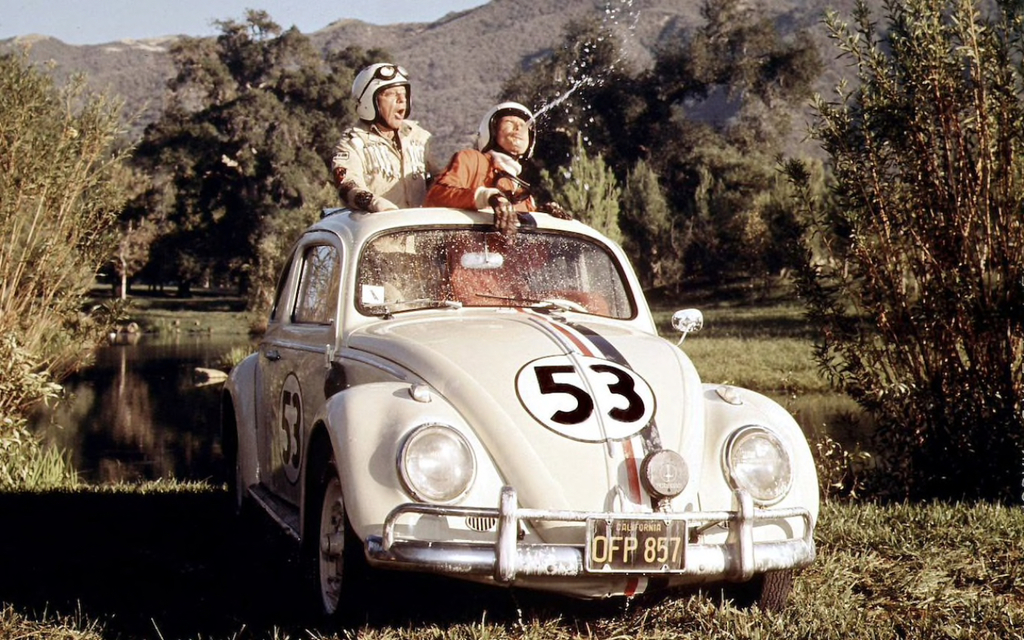 Volkswagen to end production of the iconic Beetle next year

Volkswagen is finally ending production of its iconic Beetle, ending an 80-year reign for a car that began life under Hitler’s Third Reich, became a mainstay of popular culture through the 1960s and 1970s before being revived with an updated model in 1997.

The German car maker said the last vehicle would be made in Mexico next year, at the only factory still manufacturing the car. The company said the decision would allow it to focus on other models, including its portfolio of electric cars.  Hinrich Woebcken, chief executive of Volkswagen Group of America, said: "The loss of the Beetle after three generations, over nearly seven decades, will evoke a host of emotions from the Beetle's many devoted fans."

At its peak it sold more than a million cars a day, powered in part by the cinema exploits of Herbie the Love Bug • and this particular picture shall forever [RE]main a [RE]minder of the 53 YEARS of my own VW memories, which as you are ALL no doubt aware by now, were turned sour forever by VW themselves in respect of the Beetle [BE]ing the People's CAR and that the customer is supposed to be KING rather than the GOD-ALMIGHTY DOLLAR !!!??? 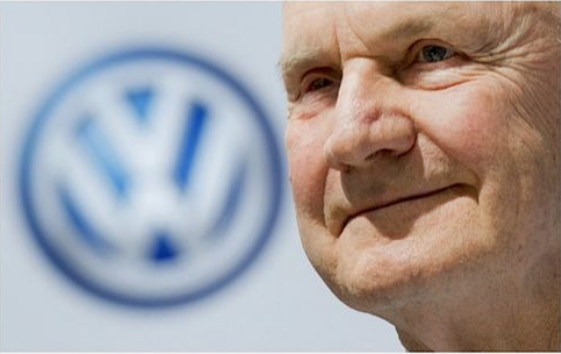 Few people were surprised when in 1993 Ferdinand Piëch became chief..., then on the brink of bankruptcy. Over the next two decades, latterly as chairman, he built the company into the largest car manufacturer in Europe by a substantial margin, rivalling Toyota for the title of largest carmaker in the world. But Piëch’s management style was not to everyone’s taste. German newspapers called him “Lord of the Manor’’; a General Motors executive once called him “quasi-psychotic’’. Aggressive, brooding and authoritarian, he ran Volkswagen like a personal fiefdom This highly-advanced Swind E Classic Mini is the brainchild of Swindon  Powertrain’s managing director Raphael Caillé, who saw an opportunity to produce an electric car with a soul that people from all walks of life would instantly fall in love with. “This is the first time an electrified classic Mini has entered production,” confirms Caillé. “There have been one-offs and prototypes before, but Swind is the first company to launch such a car to the public. The classic Mini has such a special place in people’s hearts, not only in the UK but around the world. The packaging of Sir Alec Issigonis’ 1959 design was truly ground-breaking and now we are making it relevant again. Its compact size and good visibility, together with contemporary performance and handling, makes it a car you’ll want to drive in the city and put a smile on your face.”