Marking the 500th anniversary of the death of Leonardo da Vinci,

the exhibition brings together more than 200 of the Renaissance master's

greatest drawings in the Royal Collection, forming the largest exhibition

of Leonardo's work in over 65 years.

Drawing served as Leonardo's laboratory, allowing him to work out

underpinned all of creation. The drawings by Leonardo in the Royal

Collection have been together as a group since the artist's death in 1519.

Acquired during the reign of Charles II, they provide an unparalleled

of his interests, including painting, sculpture, architecture, anatomy,


"For the pattern of life shall continue and man shall learn

more as to his welfare and conduct and shall benefit as

he may wish from my humble investigations." 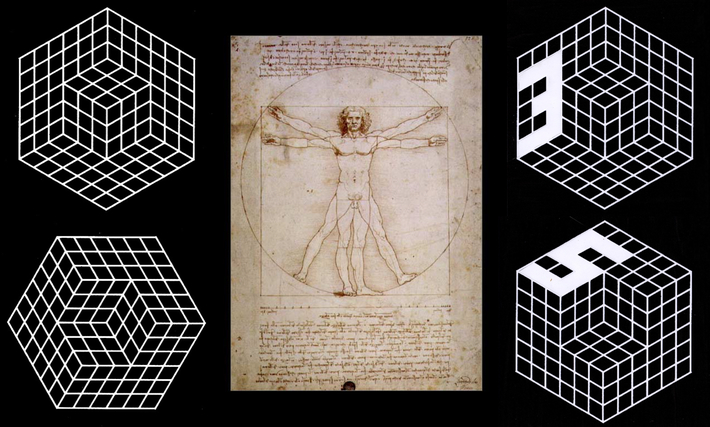 This sketch, and the notes that go with it, show how Leonardo understood

the proportions of the human body. Each separate part was a simple

fraction of the whole. For example, the head measured from the forehead

to the chin was exactly one tenth of the total height, and the outstretched

arms were always as wide as the body was tall.

These ideas were not Leonardo's, but were taken from the writings of the

Roman architect Vitruvius. Both men believed that the same principles

should be used when designing buildings.

However, Leonardo tried to take these ideas further, and spent much of

his life searching for connections between the structure of the human

body, and other patterns in nature. Elsewhere in his notes, he proclaimed

that "Man is the model of the world".

occupied Leonardo for much of his life; that of 'squaring the circle'.

without measuring. Some argue that this diagram shows that Leonardo

had a sophisticated understanding of the problem, which other

mathematicians would not develop until much later.

"Geometry has two great treasures: one is the

theorem of Pythagoras, the other the division

of a line into a mean and extreme ratio. The

first we may compare to a mass of gold, the

second we may call a precious jewel."